Gemballa Mirage GT is based on Porsche Carrera and has peak power of 670 hp.A recent accident saw the Mirage GT losing control and slamming against several vehicles in New York's Manhatten.The car somehow managed to leave the accident site but was stopped shortly after.
By : Shubhodeep Chakravarty
| Updated on: 08 Apr 2020, 09:45 AM 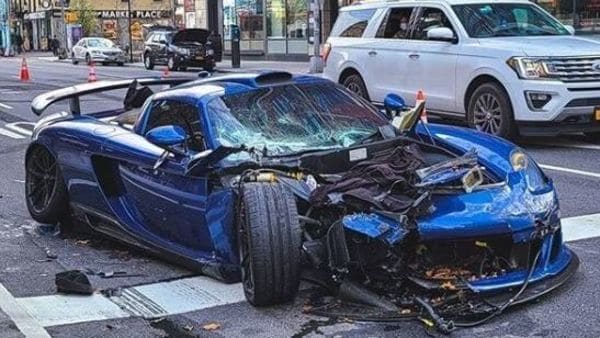 So rare is a Gemballa Mirage GT that only 25 were ever sold in the world. Now, there are just 24 of these lighting-quick race cars as a man in New York recently crashed his Gemballa Mirage GT into parked vehicles and left the stunning vehicle morbidly wrecked.

Based on the already iconic Porsche Carrera, the Gemballa Mirage GT holds a special place in the hall of fame of race cars. Gemballa took the car and tweaked the naturally-aspirated 5.7-liter V-10 engine to push up peak power from 603 hp to 670 hp, according to Car and Driver. The suspension was adjusted, new lighter wheels were put in, an updated infotainment unit was placed inside the cabin and a devilishly amazing rear spoiler was added.

An absolute head-turner, only 25 Mirage GTs were sold. In New York recently, the Mirage GT did turn heads but for all the wrong reasons.

According to Road and Track, the wrecked Mirage GT belonged to GoldRush Rally co-founder Benjamin Chen. It was the owner who was reportedly behind the wheels when it was speeding through NYC's 11th Avenue. In videos of the incident, the car is seen crashing against a mini van that was parked on the side of the street. The Mirage GT then went on to hit several other vehicles due to the momentum it had. Chen has reportedly been arrested.

Rough morning *photos taken by me*

It is highly unlikely that the Mirage GT can now be salvaged because it has suffered extensive damage to its front and side. The left portion of the bonnet has been completely wrecked, exposing the engine bay and the tyre. The ripple effect also appears to have extensively damaged the side structuring of the vehicle.

Quite amazingly, the car reportedly did manage to drive away from the scene for some time before a New York Police personnel caught up with it and made the driver stop. He is believed to have been alert at the time.