The automatic high beam of the Tesla Model 3 can be easily turned off manually from the car's touchscreen infotainment system that controls a large number of functions of the vehicle.
By : HT Auto Desk
| Updated on: 26 Dec 2021, 18:00 PM 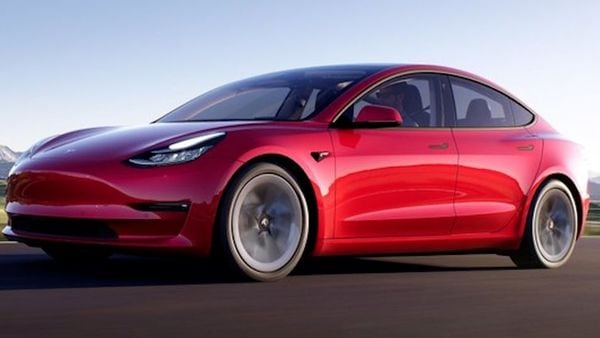 The Tesla Model 3 was saved from a major mishap.

Driving on highways in dark might become a nightmare for drivers, especially while driving through a dense forest area, where there are chances of animals coming in front of the vehicle. A driver of a Tesla Model 3 electric sedan in Sweden had exactly that kind of experience when the car had a close shave on a desolate highway.

The driver of the Tesla Model was lucky enough to avoid slamming into a moose while driving at night. The dashcam footage from the electric compact sedan shows that the car is running along the highway with the automatic high beams enabled. Around 11 seconds into the video a massive moose is seen walking across the opposite side of the road and heading towards the driver.

Suddenly, the automatic high beams of the Tesla Model 3 switch off and for a second, the moose disappears into the darkness. When the high beams turn back on, the moose can be seen jumping over the centre divider and running directly into the path of the Model 3. The driver of the Tesla sedan was able to slam on the brakes and swerve to the right at the right time to avoid hitting the animal.

The video not only shows how the driver of the electric sedan had a near miss but also how the Tesla car's automatic high beams were functioning. The reason behind the car's automatic high beams switching off momentarily was probably because the car's onboard system thought there was a car approaching from the opposite direction when the light fall of the reflectors on the highway.

The automatic high beam of the Tesla Model 3 can be easily turned off manually from the car's touchscreen infotainment system that controls a large number of functions of the vehicle. But the vehicle shows how easily the system can be fooled, without any manual intervention.