Volvo S60 will be offered in India in the T4 Inscription alone.The new S60 stays true to its high safety standards while its updated looks and feature list seeks to make it more premium than ever before.S60 will be launched in March of 2021 while bookings start January.
By : Shubhodeep Chakravarty
| Updated on: 15 Dec 2020, 12:48 PM 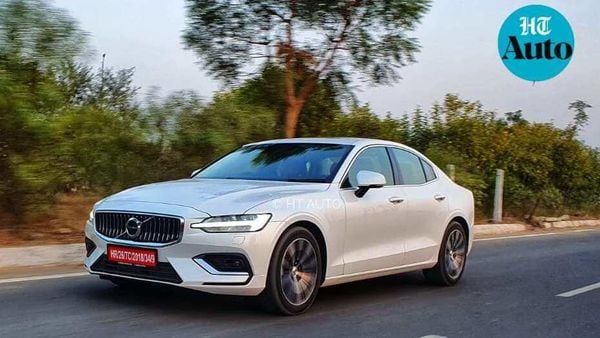 The new Volvo S60 seeks to carve out a space for itself in the luxury sedan segment. (HT Auto/Sabyasachi Dasgupta)

The new Volvo S60 has been a long time coming. Doing the rounds in several global markets, it was scheduled to touch down on Indian shores this year but a plethora of factors in a list dominated by Covid-19 related factors pushed the launch over to 2021. The good news though is that Volvo Cars India is ready, is raring and is resolute to put up the S60 against its traditional German rivals with renewed vigour.

The S60 has never been the flashiest of sedans, or the sportiest to drive. It has had a mile-long list of safety features but new-age customers are as attuned to features and drive characteristics as they are in need of a safer car. It is in these regards that the first Volvo for India in the new year seeks to play a balancing act - building on its strengths with the added intent to thrill.

What does the new S60 2021 bring forth and does it have the arsenal to silence the raging charge of the Germans?

The new S60 is a major departure in the looks department when compared to the preceding model. In fact, it won't be a stretch to say it outright that this here is the nicest, sportiest looking S60 ever from the Volvo stable in a long, long time. It does help that it bears resemblance to elder brother S90. 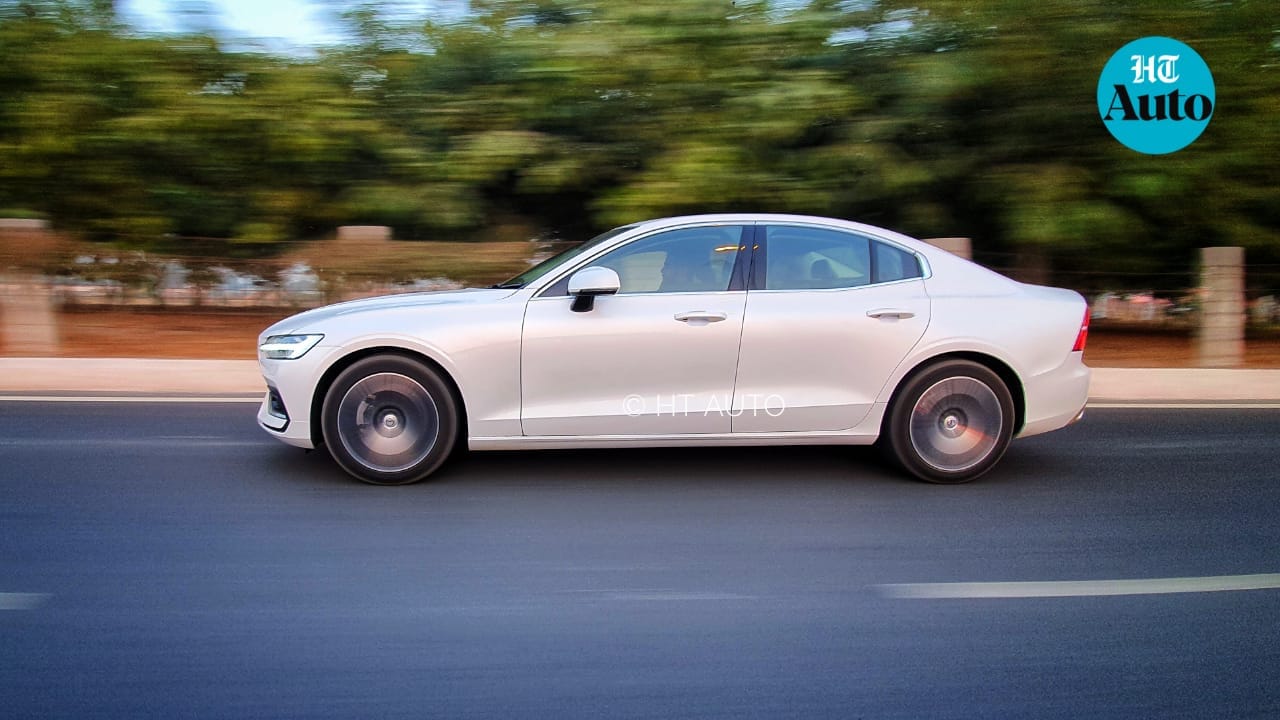 Wheelbase of the new S60 from Volvo has gone up by 100 mm for added space for rear passengers as well as a more sporty exterior profile. (HT Auto/Sabyasachi Dasgupta)

Its intentions of being a head-turner - something not many Volvo offerings can claim with bravado - is clear from its low-slung profile with a stretched out wheelbase and those really captivating 10 multi-spoke black diamond cut alloys. Is there more space thanks to the enhanced wheelbase? Sure. But what it does additionally is lend the S60 a more sporty visual aesthetic.

The front profile is marked by the typical Volvo inscription grille with the trademark diagonal badge while the Thor hammer LED head lights with auto-bending feature sit smart on either side. The fog lights are enclosed in a C-shaped casing and just above it is the high-pressure cleaning system which sprays water on the headlights, just in case this Volvo decides to get itself dirty. 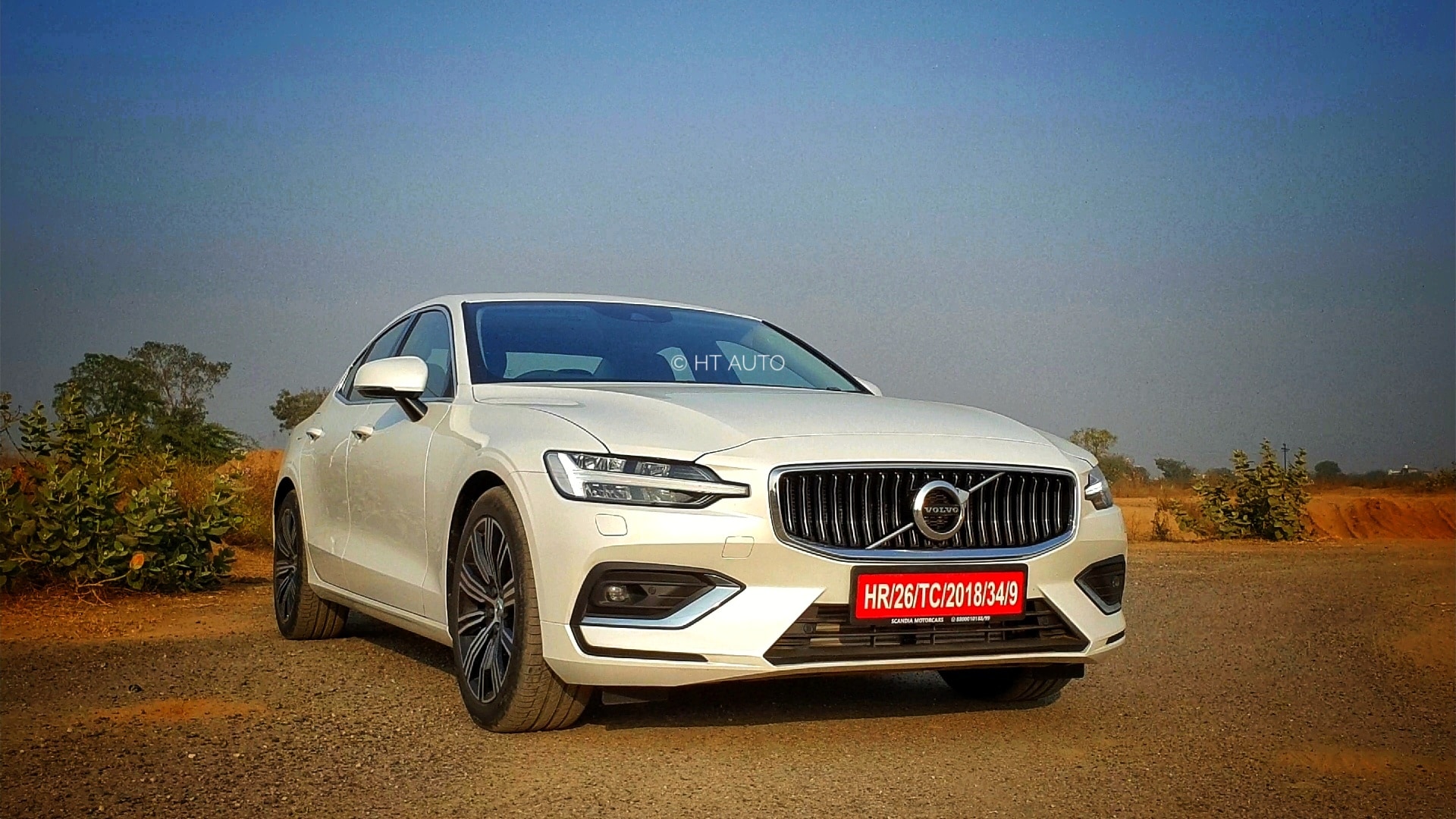 The bonnet is wide and sports prominent character lines while the rear too has been re-designed and now gets C-shaped tail lights and a more pronounced back. The shark-fin antennae sits on top while the T4 and Volvo badge are on either side here. The cabin of the S60 is where this car continues to hold the most potential. And the most promise. The cabin is typically minimalistic yet premium, typically clean yet loaded. Basically, it is typically Volvo.

There are three cabin colours to choose from. And while the blond and maroon brown may look really upmarket, it is the charcoal shade of this review unit that is likely to be the easiest to maintain in Indian conditions. Add to it the premium touch and feel and the S60 stamps and underlines its luxury credentials. 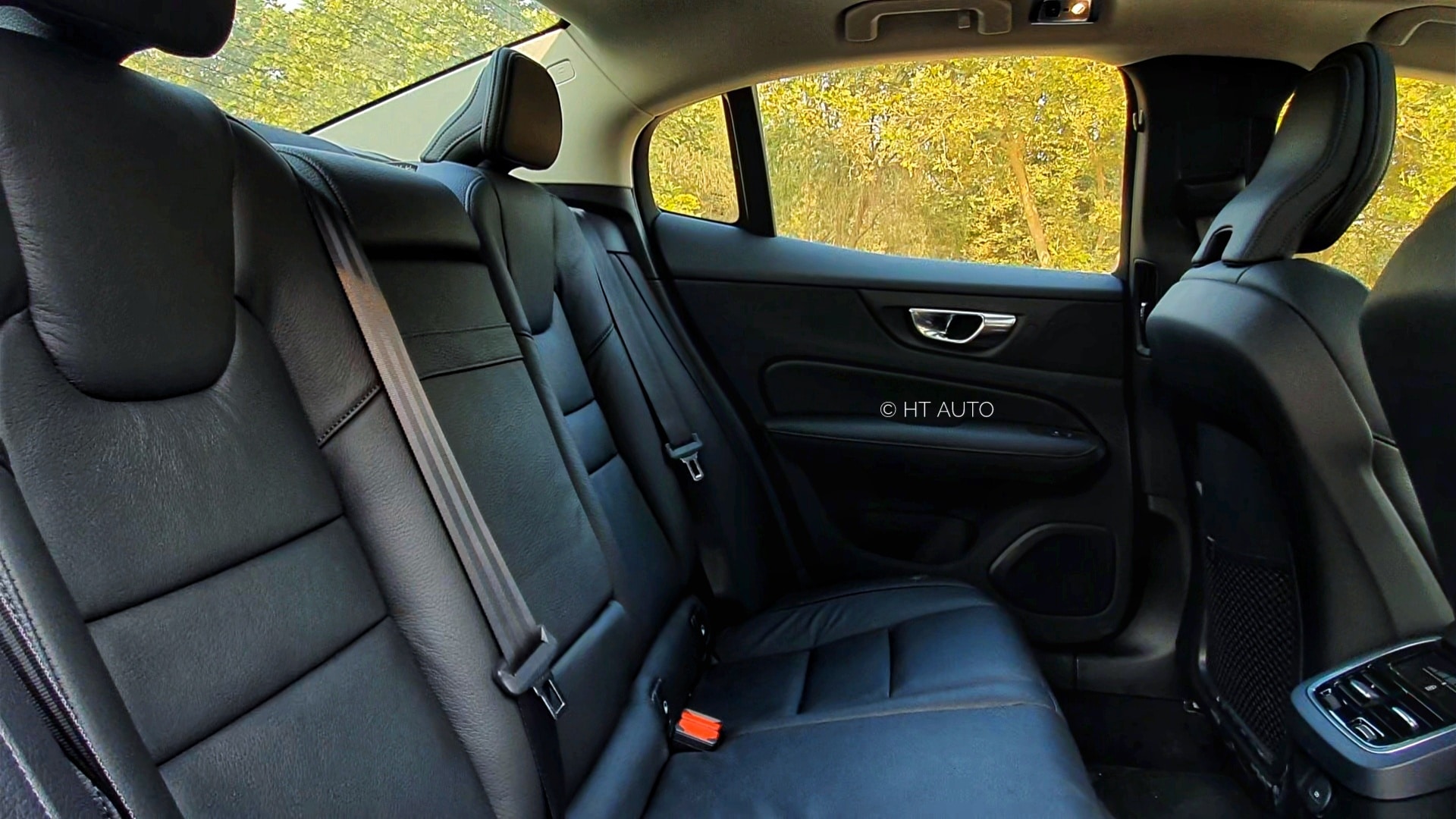 Soft-touch plastics are omnipresent with a nicely spread out dash. A hint of chrome on the door handles and driftwood inlays on the front and center panel - there is also a linear lime inlay option - whisper Scandinavian aesthetics.

The nine-inch vertical infotainment system is a familiar sight for Volvo owners even if it may take getting used to for new customers. Being large, vivid, easy to reach and responsive, however, helps its cause. 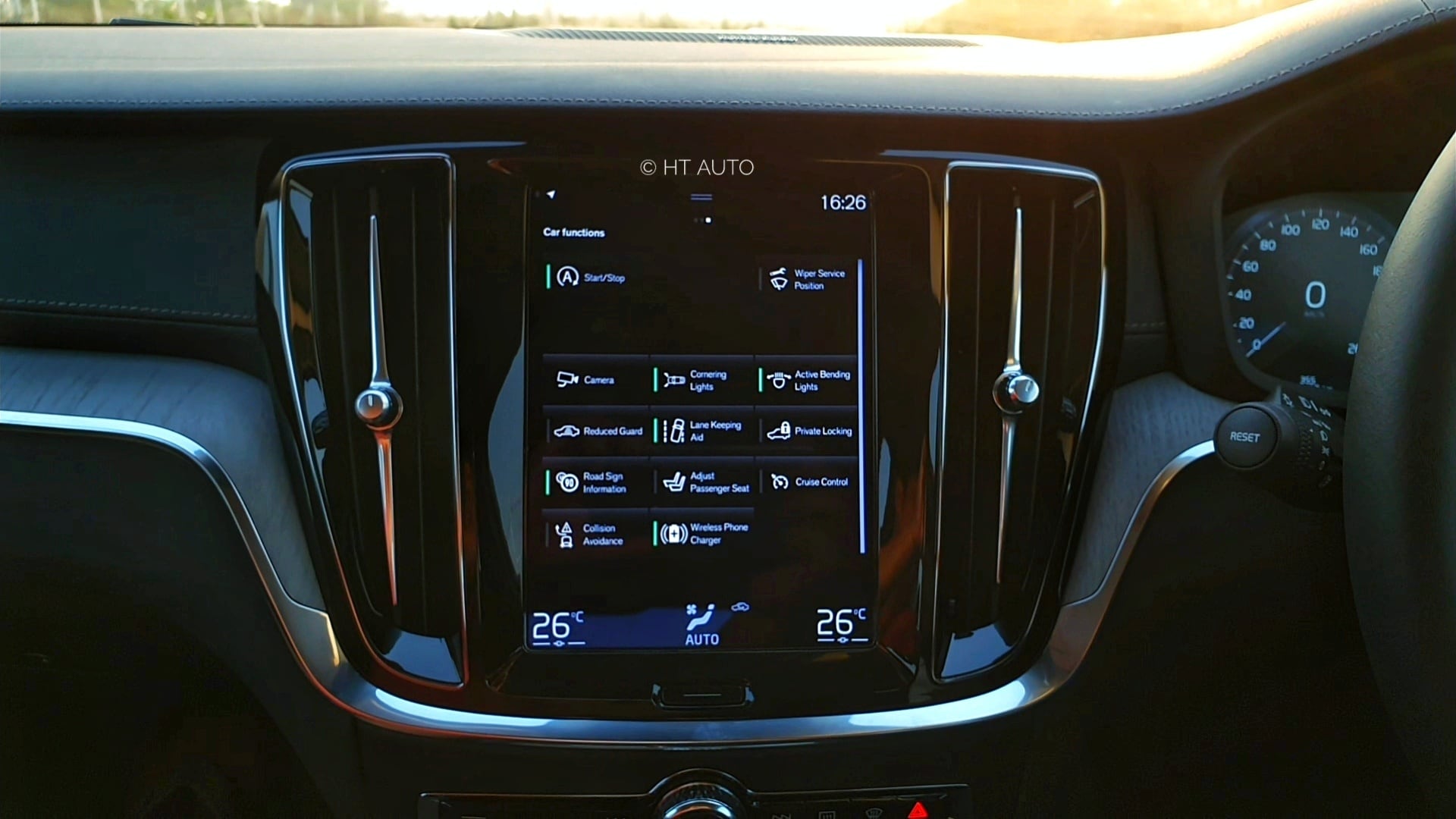 A large infotainment display, typically, has an entire page for the safety features on offer in the new S60. All of these can be activated or deactivated from here. (HT Auto/Sabyasachi Dasgupta)

Space is no constraint inside the sedan with ample room for four passengers to sprawl out, even during long journeys. The rear seats, in particular, offer generous amounts of knee-room, under-thigh support and head room while the cushioning and back recline angle is just right to ensure a plush seating experience. Shoulder room is also impressive but forget about putting even a child in the middle here thanks to the tall bump and the center console with its nicely designed vents, touch controls and 12v charging unit jutting back. 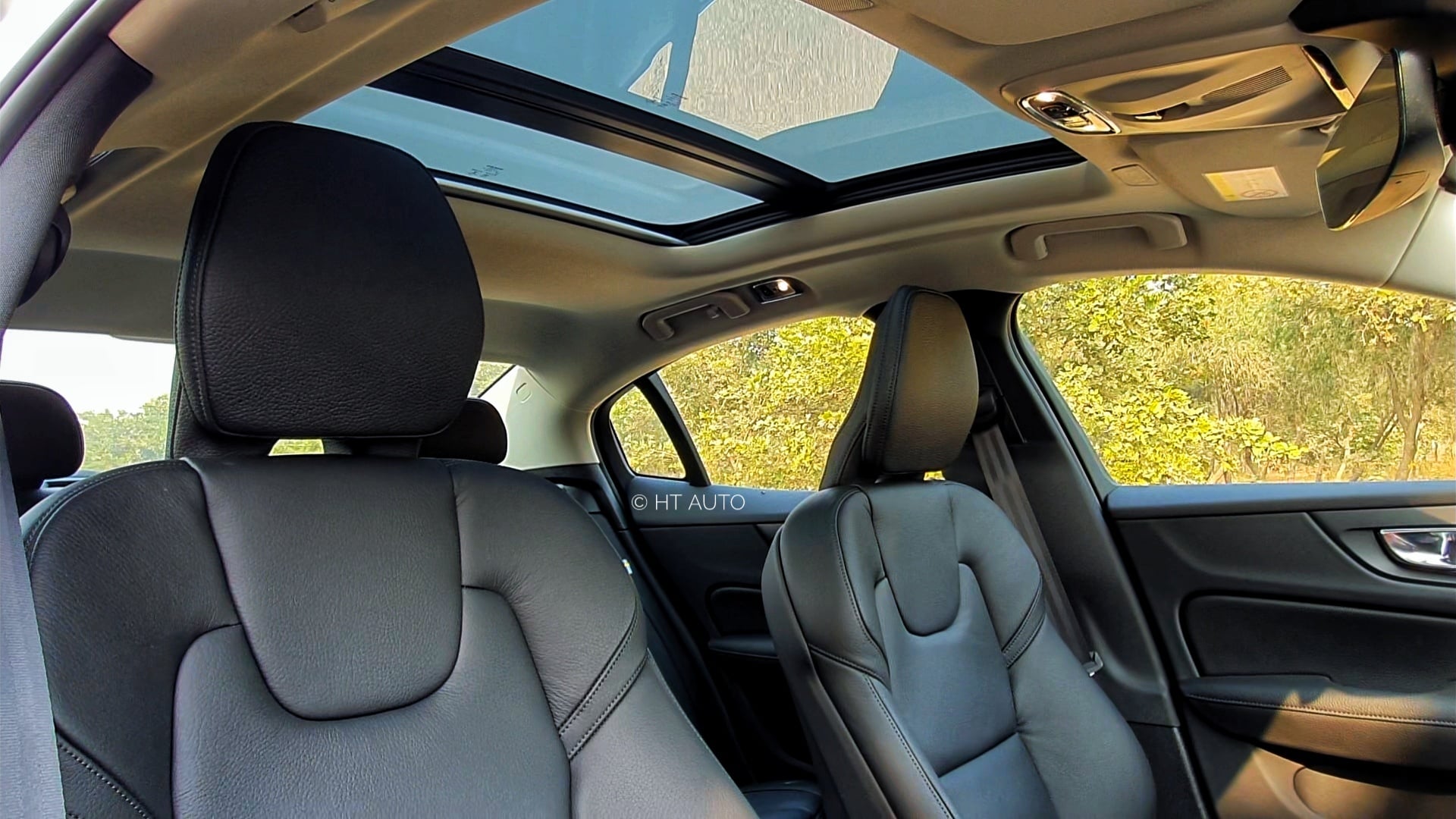 A large sunroof seeks to make up for rear windows which aren't quite the largest because of the high arm line. (HT Auto/Sabysachi Dasgupta)

Instead, just roll down the armrest, open the cup holders, rest your phone and pack in documents, and enjoy the view. On that note, I do feel the window line for the rear passenger is rather compromised and sits too high. Thank god for the one-touch sunroof though.

The front seats also come with lumber support adjustments, memory function and the under-thigh support can be extended. Unfortunately, there is no seat massage functionality and no seat ventilation system either. 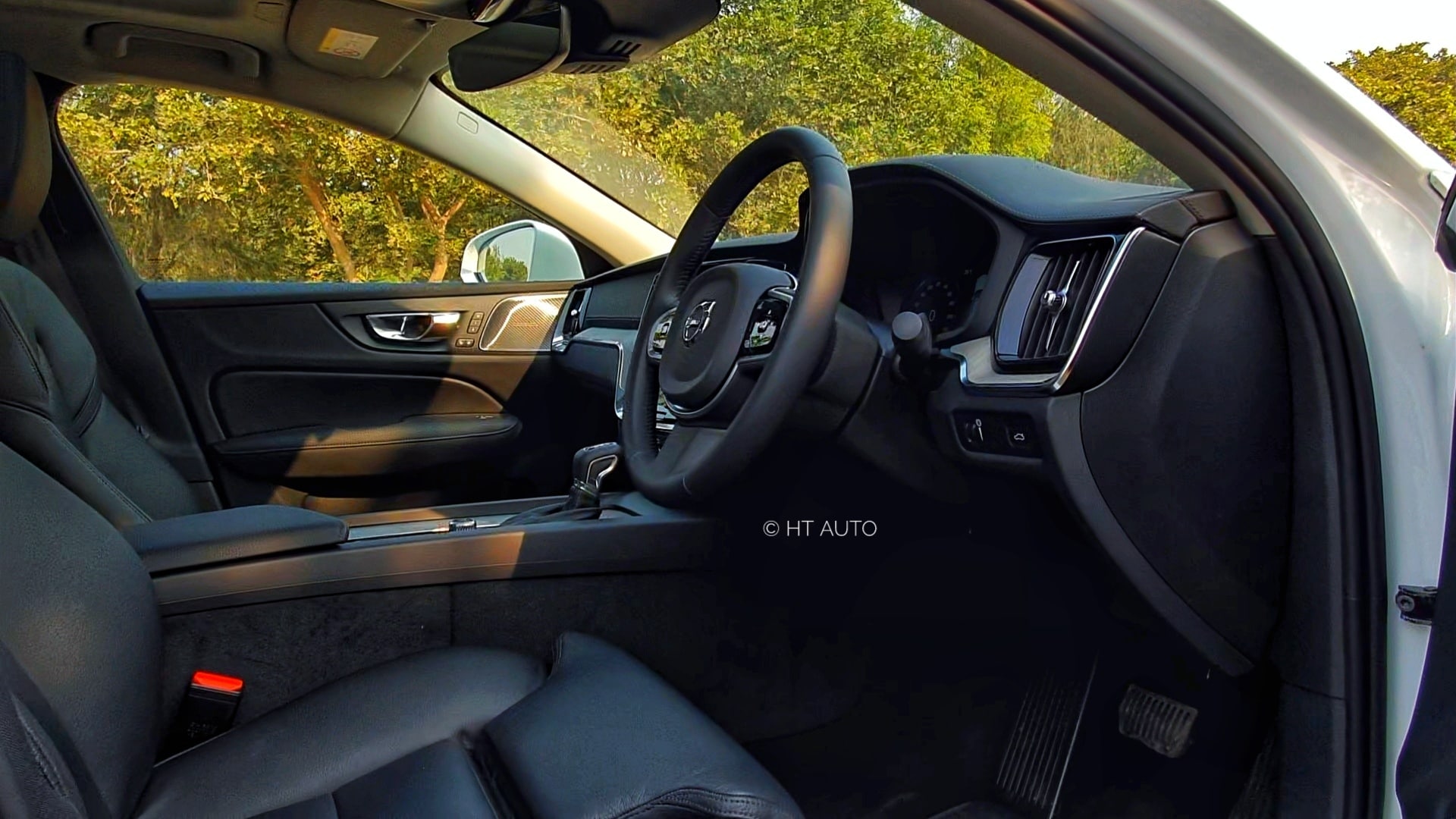 The steering wheel can be adjusted for reach and rake and while the front seats are comfortable, lack massage functionality. (HT Auto/Sabyasachi Dasgupta)

In terms of equipment list too, the new S60 is right up there with four-zone climate control, Clean Zone air purifier tech, wireless phone charging and a 14-speaker Harman Kardon system which, while not in the same league as Bang & Olufsen, is quite premium in its own right.

In terms of storage space though, the S60 fails to impress. Sure there's a glove box, storage under the armrest and other usual spaces but either these are adequate at best or minimal at worst. Even the bottle holders on each of the four doors are good only for the slender sanitizing sprays we carried along while the 750 ml water bottles were left to rattle under the seats.

The S60's biggest surprise lies in how it handles when on the move. 'Come on, let's go' or Kom sa gar vi in Swedish is what this erstwhile gentle giant begs of you. But is it in the same league as the excitable Jaguar XE or the BMW 3 Series? If you expect it to be, that would be solely your fault.

The S60 drives a whole lot better - to-be-read-as sportier - than the preceding model and even if it is still not in the same league as most of its direct rivals, its four-cylinder petrol engine punches out 190 hp and has 300 Nm of torque for a spirited intent. If it wasn't for a rather circumspect eight-speed automatic gearbox hunting for the right number when the car is being pushed, this machine would have been closer to perfection for those seeking a more engaging experience behind the wheel. But while the gearbox is nicely tuned for cruising and gentle rumblings, it does take a fraction longer to notch up the right high number for the car to propel effortlessly. A grunt of a slight resistance from the engine tells you that this S60 will push forward but only because it is being commanded to, not because it likes to. 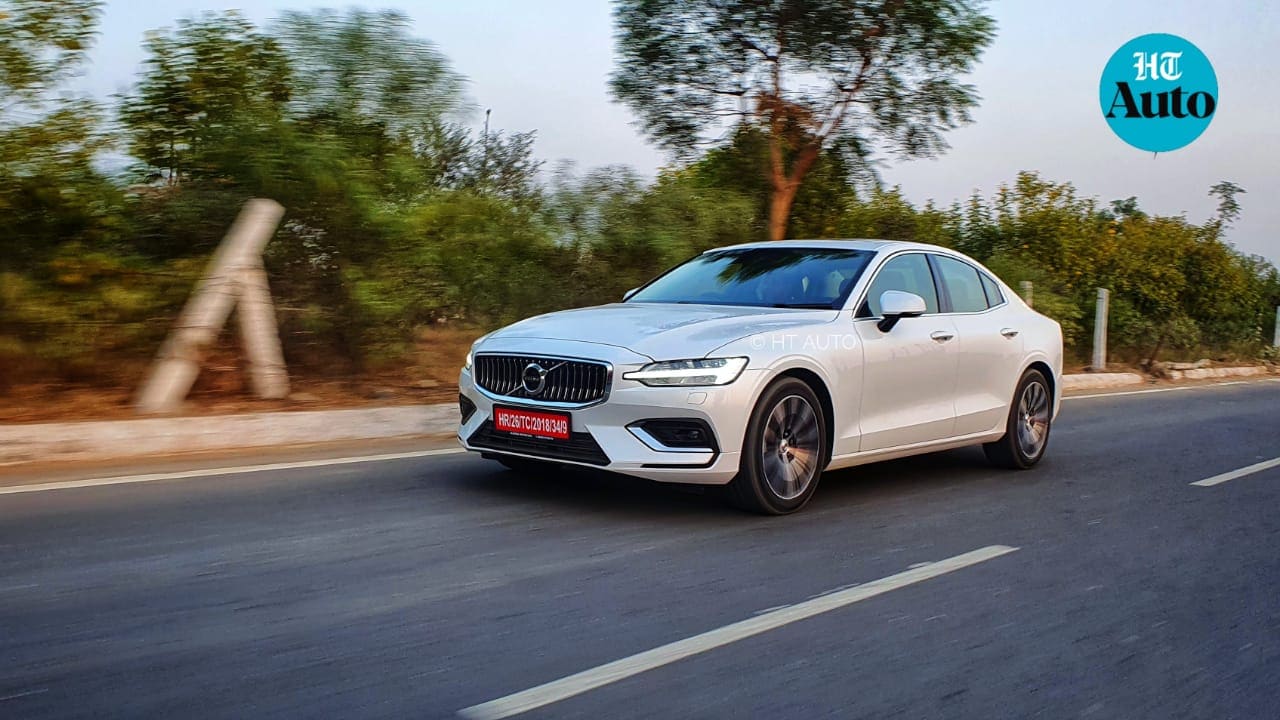 The new Volvo S60 has a youthful heart and the intention to thrill. But while it is fantastic when cruising along city or highway roads, it's sporty character is still not quite in the same league as some of its direct rivals. (HT Auto/Sabyasachi Dasgupta)

Of course, the top speed is limited to 180 kmph as per Volvo's new safety protocol around the world and I, for one, support the move wholeheartedly despite the controversy it has created.

The other notable highlight of the new S60 on the move is a suspension that is on the harder side which translates to a bit of vibration over major road bumps while the steering is planted but muted for much to be written about it. The Volvo responds to turns quick, maintains line but still offers little when it comes to being playful. Respect it and it respects you right back.

The all-new Volvo S60 is a solid step up from the preceding model. What works for it is a really nice visual update and a drive that is definitely more excitable than ever before. Pair it with the plethora of safety features on offer - adaptive cruise control, lane keeping aid, pilot assist, driver alert control, oncoming mitigation by braking, speed alert, city safety with steering support and hill start assist.

It remains firmly oriented for the discerning buyer looking at an all-rounder rather than an option which excessively excels in one department or the other - tech, drive, comfort or something similar.

Available only in the T4 Inscription trim, bookings for the car will start from January with the official launch scheduled for March. Also, there will be five color options to choose from - Crystal White Pearl, Denim Blue, Fusion Red, Maple Brown, and Onyx Black.

Expect the pricing to be between ₹42 lakh and ₹45 lakh (ex showroom).

All said, done and driven, Volvo has a winner on its hands with the new S60 but the real question is - does the S60 have a winner in Volvo to back it up with?