The new Volkswagen Virtus has been introduced as the second product under the India 2.0 project.Virtus is based on the MQB A0 IN platform with up to 95% localization levels.
By : HT Auto Desk
| Updated on: 14 May 2022, 02:47 PM 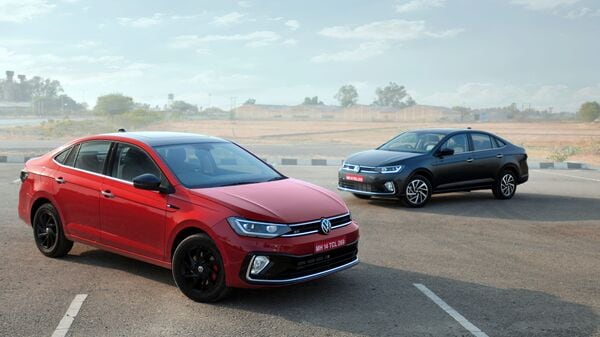 Volkswagen Passenger Cars India, on Saturday, announced that it has kicked off the pan India previews of its new Virtus global sedan. The previews of the latest VW Virtus will be held across all 152 company's authorised dealerships in India starting today (May 14) until June 08.

The new VW Virtus has been introduced as the second product under the India 2.0 project. And it is slated for the official launch on June 9th. The company says that the new launch will take it a step closer to the completion of the India 2.0 Project.

The VW customers will get an opportunity to experience the new Virtus firsthand through the pan India previews. “At Volkswagen, we have been waiting for this moment to bring the thrill of the New Virtus to our customers. I am excited to kick start the Virtus pan India previews across all Volkswagen touchpoints in India. This initiative will provide our existing and potential customers with an exclusive opportunity to experience our new global sedan before its market launch," said Ashish Gupta, Brand Director, Volkswagen Passenger Cars India.

(Also Read: Volkswagen to launch electric SUV and pickup truck in 2026, but there is a catch)

The new Virtus has been based on the MQB A0 IN platform with up to 95% localization levels, the company claims. It is also the longest car in the segment (4,561 mm) with cabin and boot space (521 litres).

The car will be offered with a 1.5L TSI EVO engine with Active Cylinder Technology (ACT), apart from that, it will also get a 1.0L TSI engine both equipped with idle Start/Stop system. The engine will come mated to a range of gearbox options including a 6-speed manual, 6-speed automatic torque converter, or 7-speed DSG transmission option.

When launched, the car will be seen in a slew of engine options such as Wild Cherry Red, Carbon Steel Grey, Reflex Silver, Curcuma Yellow, Candy White, and Rising Blue.

The pre-bookings for the new sedan have already commenced in India across the official physical touchpoints as well as the Volkswagen India website.