Rainer Zietlow, the man behind the wheels of the Volkswagen ID.4 GTX, has achieved world records earlier. In 2021, he created the record for the longest continuous journey by an electric vehicle through a single country in an ID.4.
By : HT Auto Desk
| Updated on: 26 May 2022, 10:02 AM 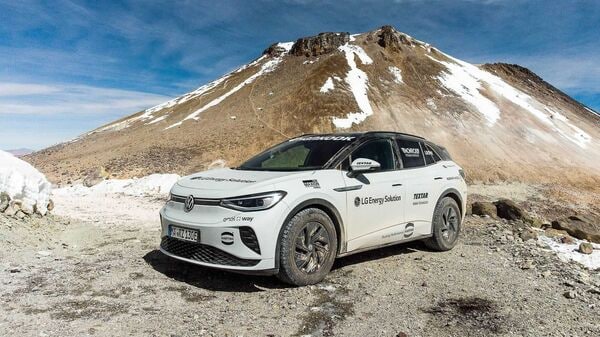 This Volkswagen ID.4 created Guinness World Record by reaching the highest altitude ever done by an EV.

Forget about range anxiety. How about climbing a mountain on an electric car? Sounds too good to be true? A Volkswagen electric car just did that and created a world record for reaching the highest altitude ever by an electric vehicle. The Volkswagen ID.4 GTX reached up to 5,816 meters above sea level. This is 45 metres higher than the previous record set in 2020. Rainer Zietlow and his Challenge4 team achieved this feat in Bolivia when the scaled Uturuncu volcano on the ID.4 GTX.

The Volkswagen ID.4 GTX, which achieved this record, is equipped with a 77kWh lithium-ion battery pack. It offers a range of around 340 kms on a single charge. The power output for the ID.4 GTX is 295 hp compared to the standard model's 201 hp. The ID.4 GTX is capable of accelerating 0-100 kmph in 6.2 seconds at a top speed of 180 kmph. On the other hand, the standard model sprints the same mark in 8.5 seconds with a top speed of 160 kmph.

The Challenge4 team began its journey on April 21 from Santiago de Chile. The team also had a Volkswagen Amarok as a support vehicle. After travelling through Argentina, the team reached Bolivia to attempt the record run. They took one week to reach the base camp village near the Uturuncu volcano. Along the way, the Challenge4 team used charging stations set up at various hotels every 300 kms.

“Our goal was to show that electric mobility is capable of high performance even at extreme altitudes," says Rainer Zietlow. “Electrical drive even has an advantage at such altitudes because it does not rely on oxygen from the air," said Zietlow. He received the Guinness World Records certificate on May 23.

Rainer Zietlow, the man behind the wheels of the ID.4 GTX, has achieved world records earlier driving the same car. In 2021, he created the record for the longest continuous journey by an electric vehicle through the length and breadth of the United States in a Volkswagen ID.4. It travelled more than 56,300 kilometres across 48 states in the US during the record run.