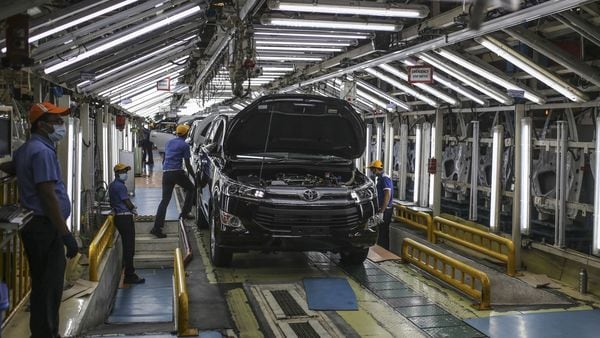 Toyota Innova Crysta is one of the bestselling cars from TKM.

Toyota Kirloskar Motor (TKM) on Sunday has announced that it has sold 12,440 units of passenger vehicles in India in October, registering a 34 per cent growth over sales in September 2021, when it registered 9,284 units. However, sales in October as compared to the same month last year has increased marginally at one per cent. In October 2020, Toyota Kirloskar Motor sold 12,373 units of passenger vehicles.

The automaker has also claimed that it recorded cumulative wholesale growth of 78 per cent between January and October this year, compared to the corresponding period last year. It sold 106,993 units during the first ten months of the current year. During the same period last year, it sold 60,116 units.

Sigamani attributed the sales performance to the automaker's popular models such as Innova Crysta and Fortuner, as they continued to dominate the respective segments. He also said that Toyota Vellfire also has been performing exceptionally well. “The Glanza and the Urban Cruiser are garnering good booking orders and we are working towards immediately catering to the pending orders in these segments," Sigamani further added.