Toyota Hilux is looking at catering to the lifestyle car buyer and has some very serious off-road capabilities.
By : Shubhodeep Chakravarty
| Updated on: 03 Feb 2022, 11:27 AM 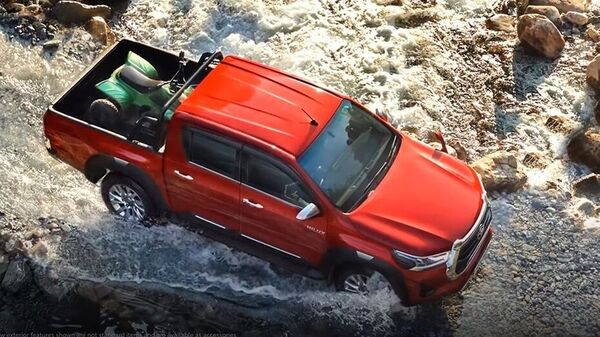 Toyota Hilux is one of the most-awaited launches in the Indian car market this year and while the pick-up vehicle was unveiled last month and bookings too were opened, Toyota Kirloskar Motor on Thursday informed that it is now temporarily halting the bookings owing to a combination of factors such as high demand and supply-side issues.

Hilux is scheduled for a launch come March and bookings had previously been opened for a sum of ₹1 lakh at dealerships or ₹50,000 through the company's online portal. In a media statement on Thursday, Toyota claimed it has received a strong response although the company did not share any booking figures as it also added that reservations are being paused. “We are delighted with the overwhelming response that the Hilux has received from our customers within a fortnight of its launch," the statement read. “We are grateful to our valued customers for their continued trust and confidence in our brand and our enhanced offerings in this whole new product segment. However, in light of various factors impacting our supply, we are unable to meet the heightened demand. Thus, we deeply regret our temporary halt of bookings for the Hilux with a view to avoid any further inconvenience to our customers."

Toyota further elaborates that bookings would be opened once again but does not specify when.

The Hilux is based on the same platform as the Toyota Fortuner SUV but is looking to create a unique identity for itself in a segment that is currently microscopic here. Its closest rival at launch would be the Isuzu V-Cross.

Hilux does benefit from an imposing exterior design, massive road presence and will come with a 2.8-litre diesel engine option with multiple drive modes. There is 204 bhp of max power and 420 Nm of max torque for the taking.

But it may not just be about brute force when on the move or macho looks when just standing still. The cabin of the Toyota Hilux gets a number of features which include an eight-inch infotainment screen, support for Apple CarPlay and Android Auto, soft-touch leather upholstery and dual-zone climate control, among others.