Toyota Glanza, based on new-gen Maruti Baleno spotted ahead of launch 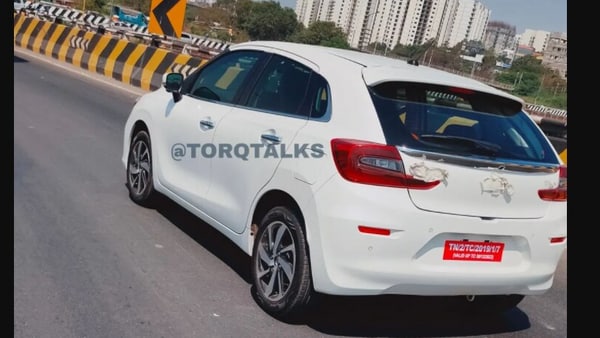 Toyota is likely to launch the updated Glanza hatchback in the Indian market soon.

Soon after the launch of the much-awaited new-gen Maruti Baleno, Toyota has now initiated testing of its new Glanza hatchback which is nothing but a rebranded version of the Baleno.

Only recently, the new Glanza was spotted getting tested on the Indian roads indicating that the launch might take place in the coming weeks. However, no official indication is provided yet by the company.

Painted in pearl white, the Glanza can be seen sporting the same tail lamps, as well as remastered bumper design found on the 2022 Maruti Baleno. However, the alloy wheels design seem to be different. Also, details suggested by previous spy shots indicate that the model may also get a different bumper with wider air inlets, a revised front grille, and tweaked LED DRLs. Goes without saying, the Maruti Suzuki branding will be replaced by the Toyota's in the Glanza.

While interior details on the upcoming Toyota Glanza remain unknown as of yet, expect it feature the same cabin as the new Baleno. It could sport a large infotainment system with 360-degree surround-view camera, as well as a head-up display and a flat-bottom steering wheel. In addition also expect to find features like rear aircon vents, new HVAC controls, auto-dimming IRVM, and a sliding driver armrest on the car. The company could create distinction with the use of different upholstery option.

At the heart of the new Glanza will sit a 1.2-litre petrol engine which will be responsible for delivering 89bhp of power and 113Nm of torque. The engine will also get an idle start/stop function. The transmission duty will be performed by either a five-speed manual or a CVT unit.

As found in the existing model, the new car will continue along in the same trim options – G and V.