This wooden Mercedes AVTR Concept replica looks just like real, it drives too 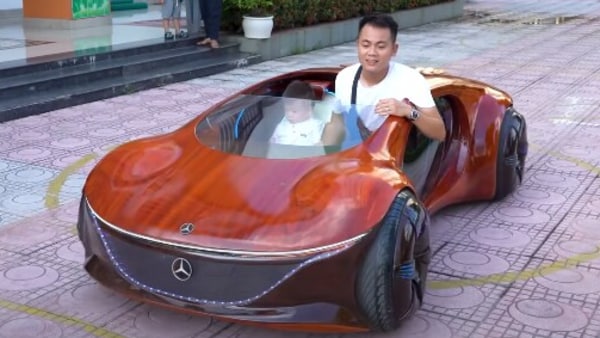 Mercedes-Benz AVTR concept from the CES 2020 was one of the finest examples of how the concept of sustainability meets automotive design. The German car brand took inspiration to make this model from Avatar film. The unique and futuristic concept may not have made it to production yet, but the thought-controlled mechanism, as the luxury car brand claimed it to be powered was truly mind-boggling. Now, a wood artist and Youtuber from Vietnam, who previously made several vehicle replicas and even a tank from wood has made a lifesize replica of the AVTR concept and what's most astonishing is that this toy car can drive under its own power.

The Youtuber published a video showing a 100-day building process for the car. It shows how the chassis was assembled by welding the frames together before attaching the suspension. It gets 14-inch wheels and real tyres. The front suspension gets shock absorbers, indicating the detail the artist focused on. The rough chunks of wood loosely define the car's shape throughout the video.

The toy car even comes with light-up bionic flaps at the back, just like the exquisite concept car. It also features automatically opening doors and copious amounts of LED lights inside the cabin and on the exterior of the vehicle, replicating the actual concept car's lighting signature. It even comes with LED wheel covers, just like the concept model from 2020. Overall, it comes as a faithful replica of the stunning concept car in wood form.

Speaking about the original AVTR concept, it comes churning out more than 350 kW peak power thanks to an exponentially high 110 kWh battery pack. The car is claimed to have a range of more than 700 km. Also, Mercedes-Benz claimed during its unveiling that it is capable of being charged fully in just 15 minutes thanks to an ultra-fast charging technology onboard.