This Tesla Model S Plaid can make the noise of a V8 engine. Watch here

Tesla owners can add up to five car sounds as per their choise.Tesla has added this feature to alert the visually impaired people.
By : HT Auto Desk
| Updated on: 25 Jul 2021, 18:10 PM 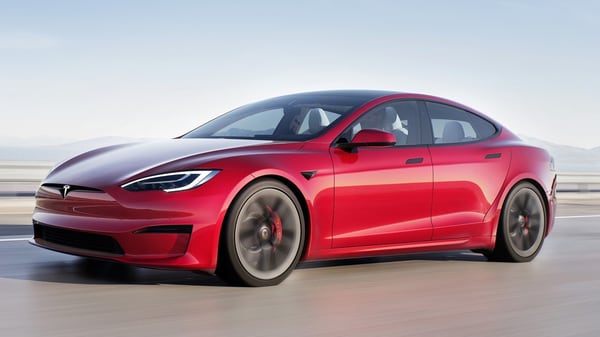 Tesla Model S Plaid is the fastest car from the EV maker.

Electric vehicles are soundless. Even though the Tesla cars are super expensive than internal combustion engine-powered cars, they can't make a noise like the ICE engines. But this Tesla Model S Plaid can. This brand new Tesla Model S Plaid actually makes the noise of a large V8 engine.

A Youtuber and automobile enthusiast named Brooks Weisblat has added V8 sound to his brand new Model S Plaid. The result is absolutely stunning. However, as it seems, any Tesla owner can actually make his or her Model S Plaid make this sound.

As Brooks Weisblat describes, the Tesla owners can choose any car sound and whenever the electric car runs, it will make the noise of that particular vehicle. The Tesla owners can add up to five vehicle sound to their soundtracks.

Brooks himself has recorded the sound of a supercharged V8 engine from a Dodge Hellcat, which is one of the fast and most powerful petrol cars in the world.

As he explains in his video all the owner needs to do is load a USB drive then simply bring up the boom box. There is a driving sound option, which is pumped through speakers on the outside of the car. “You can replace the sounds with whatever you want: Lamborghini sound, Ford GT," he further added.

The Model S Plaid, which is the quickest Tesla in the world at present emits the sound of the V8 through its external speakers and it sounds very much real. The external speakers emitting noise are designed to alert visually impaired people.