On May 27th, two NASA astronauts will undertake the Demo-2 space mission - first crew mission by SpaceX.Their ride to to the launch pad will be a Tesla Model X instead of the iconic NASA Astrovan.
By : Sabyasachi Dasgupta
| Updated on: 14 May 2020, 10:35 AM 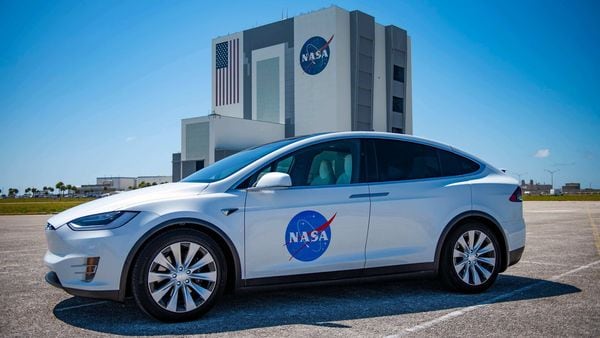 When one remembers a NASA space mission, images of a bus appears in mind which is used to carry the astronauts to the space shuttle. For 27 years, since 1984 till the end of the shuttle program in 2011, NASA crews used to make the nine-mile trip in a modified Airstream Excella RV. They can also be seen in action in Hollywood movies on space missions like Apollo 11, Gravity or Armageddon.

The days of those buses are gone now. At least for the first crew space mission undertaken by SpaceX codenamed the Demo-2 mission. Am all-electric Tesla Model X will replace the iconic bus as the Astrovan, the vehicle used to transport astronauts to the launchpad.

On Wednesday, NASA Administrator Jim Bridenstine took to Twitter to unveil the official ride for two NASA astronauts Bob Behnken and Doug Hurley. The two will board the SpaceX's new Crew Dragon spaceship on May 27 for this historic crew space mission. This will be the first time in history that NASA astronauts will take a car ride to the space shuttle.

Bridenstine wrote, “Here’s some @Tesla news that everyone should love. Check out the Model X that will carry @AstroBehnken and @Astro_Doug to the launchpad for the Demo-2 mission! #LaunchAmerica."

Here’s some @Tesla news that everyone should love. Check out the Model X that will carry @AstroBehnken and @Astro_Doug to the launchpad for the Demo-2 mission! #LaunchAmerica pic.twitter.com/6GCQYDFXiv

Back in January this year, the two astronauts appeared in a photo during flight training sessions with a Tesla Model X SUV in the background, giving hint that the vehicle will be used for this purpose.

The Tesla Model X is available in US in 5-seater, 6-seater and 7-seater options, which means there would be ample space for to fit in at least two astronauts with all the gears.

The Model X SUV was first unveiled as a prototype way back in 2012. The first production version was unveiled three years later. Tesla claims it to be the fastest SUV on earth with the ability to hit zero to 60 miles in just 2.6 seconds. The Model X SUV has a range of 565 kms, more than any other electric SUV on offer till date.