Nio also launched a bigger volume battery pack that can improve driving range.Deliveries of the new Nio EV will start from the first quarter of 2022.Nio’s new sedan will go head-to-head with Tesla’s best-selling Model 3.
By :
| Updated on: 09 Jan 2021, 08:58 PM 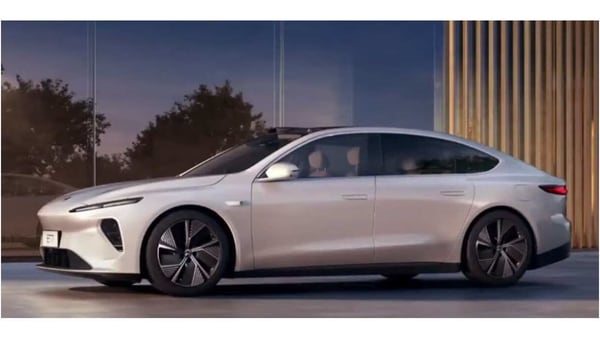 Chinese electric-car maker Nio Inc. is pitting itself further against market leader Tesla Inc., unveiling its first sedan in direct competition with the U.S. company’s most popular model and other international competitors.

The all-electric sedan ET7, released by Nio founder and Chief Executive Officer William Li at a company event in Chengdu on Saturday evening, will start at 448,000 yuan ($69,193) before government subsidies. That compares with 265,740 yuan for an entry-level Tesla Model 3, built in China. Deliveries will start from the first quarter of 2022.

Nio also launched a bigger volume battery pack that can improve driving range, an upgraded autopilot system and the second iteration of its battery-swap station, a concept whereby people can change the battery in their vehicle rather than re-charge it. Nio targets reaching 500 power swap stations by the end of 2021.

Nio is coming off a stellar 2020. In the early months of last year, the automaker looked to be running out of cash having spent heavily on marketing and splashy showrooms for its ES8 and ES6 electric SUVs. But in April, it received a $1 billion investment from entities led by the municipal government of Hefei and in July, a $1.5 billion credit line from Chinese banks.

Its New York-listed shares finished the year up 1,112% and the company has begun reporting gross positive margins, having delivered 43,728 vehicles in 2020.

Li, speaking in Shanghai prior to this weekend’s event, listed Nio’s main rivals as automakers like BMW AG, Mercedes-Benz or Audi AG. While Tesla “maintains its ambition to become a Volkswagen or Ford in electric-vehicle manufacturing, we will insist on producing premium cars," he said.

Notwithstanding, Nio’s new sedan will go head-to-head with Tesla’s best-selling Model 3, of which more than 120,000 were sold in China last year. The Palo Alto, California-based company also started selling its roomier China-made Model Y SUV on Jan. 1, which starts from 339,900 yuan. Tesla CEO Elon Musk has said the Model Y has the potential to outsell all other vehicles it makes.

In an interview after the launch in Chengdu, Li said he sees the ET7 more as a rival to Tesla’s Model S if comparisons are to be made.

Nio is working on another sedan, too. Its one-two sedan punch follows three SUV models since 2018.

There almost certainly will be room for them all. Car ownership in China lags other developing nations, with about 173 out of every 1,000 people having an automobile versus 433 in Malaysia and 373 in Russia. In the U.S. and Australia, it is 837 and 747, respectively, McKinsey & Co. data show.

Auto sales in Asia’s biggest economy rose for a fifth straight month in November, led by demand for EVs. China, a “linchpin of growth for the EV market," according to Wedbush analyst Dan Ives, is expected to maintain its world-leading position.

At the moment, Nio only sells its cars in China. But the company has said it