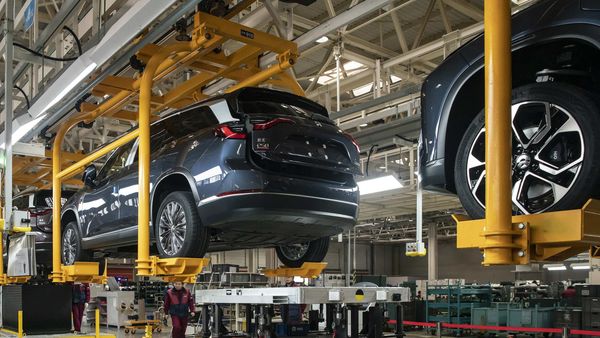 Employees install batteries onto an electric sport utility vehicle at the Nio production facility in China.

Car sales rose for a fifth straight month in China, fuelling optimism that a two-year slump in the world’s largest market is over as the coronavirus pandemic eases and demand for electric cars from the likes of Tesla Inc. grows.

The gain adds to signs that a sustained rebound is underway, a relief for global automakers such as Volkswagen AG to Toyota Motor Corp that are struggling with sputtering demand in other major markets in Europe and North America. Rising sales of electric cars from Tesla, BYD Co. and Nio Inc are helping to fuel the rebound.

Tesla sold 21,000 vehicles in China in November, PCA said, signalling a record month for Elon Musk’s carmaker. The company has steadily boosted sales in China after starting deliveries of locally made sedans about a year ago. Tesla also said on Oct. 20 it is starting Model 3 exports from China to markets including Germany, France and Switzerland.

Still, Tesla is facing intensifying competition from local rivals including BYD and Nio, which have cemented their positions as the biggest Chinese automakers by market value.

A decades-long expansion in the Chinese market gave way to a slump that began in mid-2018 as a cooling economy and trade tensions with the U.S. weighed on demand. Next year, passenger-vehicle sales may rise as much as 15%, according to the State Information Center.

There are about 275 million automobiles in use in China -- leaving a lot of room for growth for the country of 1.4 billion people. The owners of the nation’s 100 million motorcycles and 300 million electric bicycles could possibly opt for cars in the future, Dong Yang, a former secretary general of China Association of Automobile Manufacturers, said last month.

More than half of Chinese consumers planning to buy a new car would prefer a new energy vehicle over an internal combustion engine auto, according to a survey by researcher CLSA that included 1,600 respondents. That’s up from a third in 2018, CLSA said, citing lower prices, rising quality, easier access to license plates and government subsidies as reasons for electric cars’ rising popularity.

Robust demand for heavy-duty trucks has also propelled China’s vehicle sales over the past few months. Sales of heavy-duty trucks surged 39% in the first 11 months of the year to 1.5 million units, according to PCA.