Tata Safari had been launched last month at a starting price point of ₹14.69 lakh (ex showroom).Tata states that customers are largely preferring the Safari in XZA+ trim in Royal Blue and Orcus White hues.
By : HT Auto Desk
| Updated on: 02 Mar 2021, 03:07 PM 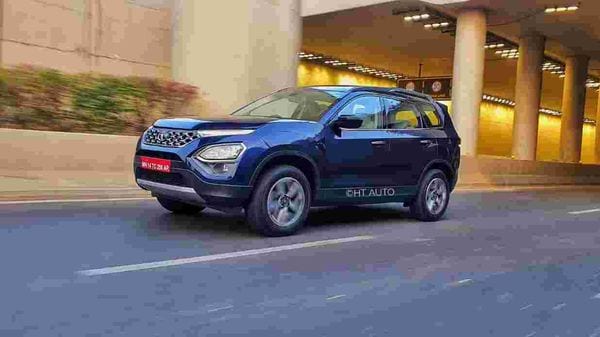 Tata Safari is essentially a three-row version of Harrier.

Tata Motors on Tuesday announced it had delivered 100 units of the recently-launched Safari in Delhi-NCR region in a single day. Underlining the claim of a strong response to the Safari, Tata Motors further highlighted that a majority of Safari customers are opting for the XZA+ trim with Royal Blue and Orcus White hues.

Tata Safari had been launched last month at a starting price point of ₹14.69 lakh (ex showroom) and its architecture is derived from the D8 platform from Land Rover. This OMEGARC is what also underpins the Harrier.

The buzz in the three-row SUV segment has been steadily increasing and this may be why Safari has reportedly seen an initial burst of success. "We are elated to see the response coming in for the all-new Safari. The delivery of 100 Safaris on a single day is a proof of the same," said Ritesh Khare, Zonal Manager, North, Passenger Vehicles Business Unit, Tata Motors.

(Also Read: From Safari and Hector Plus to Hyundai Alcazar, is Innova Crysta under threat?)

Safari gets a 2.0 litre turbocharged Kyrotech diesel engine and has 170 PS power and 350 Nm of peak torque on offer. The transmission option includes 6-speed manual and 6-speed automatic transmission unit. For the record, this is the same engine and transmission which is also found on the Harrier SUV.

The Safari rivals the likes of MG Hector Plus, Toyota Innova MPV and the upcoming Hyundai Alcazar (seven-seat Creta).