Home Auto Cars News From Safari And Hector Plus To Hyundai Alcazar, Is Innova Crysta Under Threat?

From Safari and Hector Plus to Hyundai Alcazar, is Innova Crysta under threat?

Hyundai Alcazar will soon join the likes of Tata Safari and MG Hector Plus to possibly mount a challenge to Toyota Innova Crysta.Innova Crysta has been a segment leader among large MPVs but three-row SUVs may change the dynamics of the game.
By : HT Auto Desk
| Updated on: 25 Feb 2021, 09:36 AM 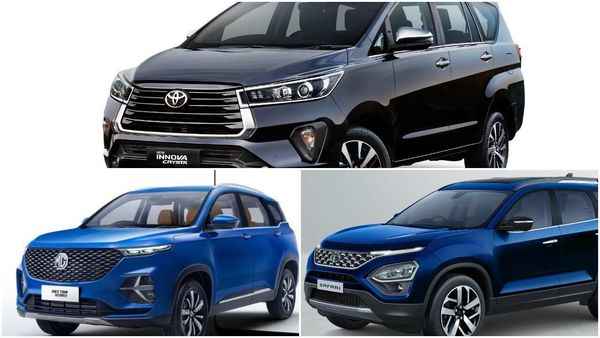 Innova Crysta (top) has managed to constantly re-invent itself to glue the crown on its head among cars with three rows of seating. But newer rivals are keen to mount a serious challenge.

SUVs have been ruling Indian roads for quite some time and while it is the sub-four-meter SUVs that have the biggest appeal considering factors such as price point, proportions and even looks and tech packed inside, SUVs with three rows are now making presence felt. And with the line between SUVs and MPVs possibly blurring, the launch of vehicles such as Tata Safari and MG Hector Plus, and the upcoming reveal of Hyundai Alcazar may send alarm bells ringing for Toyota Innova Crysta.

The Toyota Innova Crysta has been the undisputed champion of the three-row MPV segment for years and years, offering comfortable ride and a decent drive performance. The vehicle of choice for large families, the Crysta nameplate had also brought in modern looks to the vehicle. But the MPV is now possibly under some serious threat from newer kids on the block and the road ahead may not be smooth sailing.

Take the case of the recently-launched Safari. Tata Motors brought back the iconic name but to a vehicle that is largely based on its Harrier SUV. At a starting price point of ₹14.69 lakh (ex showroom), the car also comes with top-of-the-line Adventure Persona edition priced at ₹20.20 lakh (ex-showroom) for the manual and ₹21.45 lakh (ex-showroom) for those looking for a more rugged visual appeal from their vehicle. Of course, the Safari only comes with a 2.0-litre Kryotec diesel engine while the Innova Crysta does get both petrol and diesel engine options.

And then there is the recent announcement of Hyundai entering the fray with its Alcazar. The Koreans have thus far not had a three-row vehicle in the Indian market and this here could slot itself well, considering how popular its smaller SUVs like Creta and Venue are. And being a Hyundai, expect it to be quite the looker on the roads.

Gone are the days indeed when a people-mover was bulky and boxy. The likes of Innova Crysta, Safari, Hector Plus and more are styled well and appeal to a large section of people. But the newer offerings are upping the ante in feature lists, engine options, transmission choices and more. As such, Innova Crysta - with its price range between around ₹16.30 lakh and ₹24.30 lakh (ex showroom) may feel some of the heat in the times to come.