Hector was MG's first product in India, providing a foundation for the company here.2021 MG Hector gets subtle exterior changes and updates inside the cabin.Hector Plus seven-seater gets a bench seat in the second row.
By : HT Auto Desk
| Updated on: 07 Jan 2021, 05:14 PM 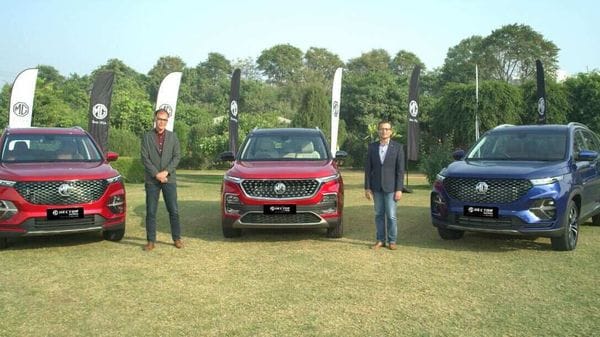 Hector 2021 (center), flanked by Hector Plus on either side.

MG Motor India had a pumped-up Thursday and drove in Hector 2021 and the seven-seat version of Hector Plus in the Indian car market. While the company has previously launched the ZS EV and Gloster premium SUV, Hector - its debut product for India, appears to remain its mainstay and carries the bulk weight of expectations.

Hector was first launched when MG came calling in India back in 2018. Hector 2021 seeks to build on the strength of the first model and gets a new thermopressed front grille, a grey-coloured front and rear skid plate and a non-reflective strip connecting the two tail lights. One eyesore of sorts in the previous Hector was the car's large frame sitting on 17-inch alloy wheels which appeared tinier than they actually were. MG has done away with this and the new Hector gets 18-inch wheels.

There is much to like on the inside of Hector 2021 too. While there is the option of choosing an all-black colour theme, there is a more pleasing dual-tone colour choice as well. Significantly, the SUV becomes first in the market to offer 'Hinglish' voice recognition. Ambient lights have also been added to all four doors of the car while MG says the amount of cushioning on all seats have been increased to enhance the level of comfort inside. The front seats are ventilated while compatible phones can be charged wirelessly.

Pricing of Hector 2021 starts at ₹12.89 lakh for Style variant with 1.5-litre turbo petrol engine and manual transmission, going up to ₹18.32 lakh for Sharp variant with 2.0-litre diesel turbo with manual. There is also a hyrbid petrol on offer in Super, Smart and Sharp variants. Dual-tone variants will be charged at ₹20,000 over the base variant prices mentioned here.

MG has also officially launched the seven-seat version of Hector Plus that was brought in last year. The difference is the addition of a bench seat in the second row, instead of Captain's Seats here. Prices start at ₹14.65 lakh for the Style variant in petrol and topping at ₹18.32 lakh for the diesel in Select variant.