Skoda Slavia is an India-specific model that is looking at playing a big role in the mid-size sedan space.

Skoda Slavia is the next big ticket-launch from the Czechs in the Indian car market. With bookings for the Slavia being opened earlier this month, the premium mid-size sedan promises to be a breath of fresh air in a world filled with SUVs of all shapes and sizes.

It is a brave move, of that there is little doubt. Skoda is determined to create a more sizable play in India and had made its intentions mighty clear when it drove in Kushaq mid-size SUV here earlier this year. But while one can easily understand why Kushaq was the first product under India 2.0 Project, the Slavia may turn out to be an enormous gamble. To revive a consistently faltering segment, the Slavia will need to be a power-packed offering that is an all-rounder in every sense. But will it be able to carry not just Skoda forward but also revitalize its segment that has hardly seen much happening since the fifth-generation Honda City was brought in? It may be a yes on paper as I got a chance to check the latest Skoda as it posed away to glory at Mumbai's Princess Docks.

Sedans are seldom imposing and are more often stylish or sophisticated, or both. Here is where Skoda Slavia attempts to bring about a confluence of these adjectives and, dare I say, manages to succeed as well. It is visibly wider at 1,752 mm and has a stretched out profile from the side which is likely to give it a pronounced road presence. And yet, it has the typical sedan attributes to add a generous dose of style and sophistication. 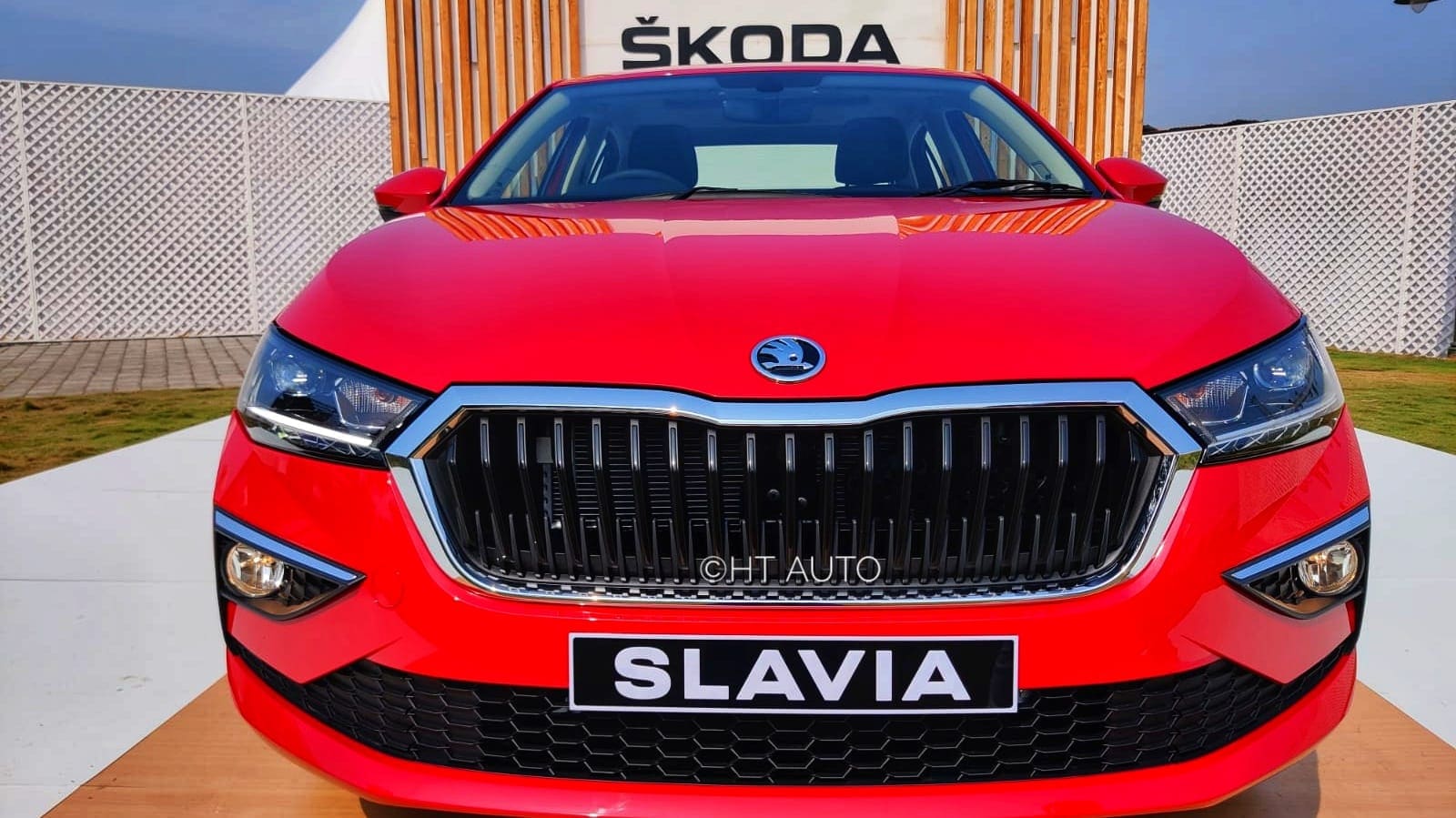 Slavia from Skoda has a very European exterior styling with modern elements insterspaced.

The front grille is bordered on all sides with chrome and is identical to what is seen on the Kushaq as well. The head light units feature what Skoda refers to as advanced LED technology and blend well with the grille, complete with a dash of DRL. The bonnet above swoops down gently and has multiple character lines to further lend a dose of character.

Character lines continue on the side of the Slavia as well where one also finds chrome additions on the door handles, 16-inch wheels with stylish alloy design, chrome outlining on the bottom of the windows and overlapping around the C-pillar bend, and what appears to be a reasonably high ground clearance. 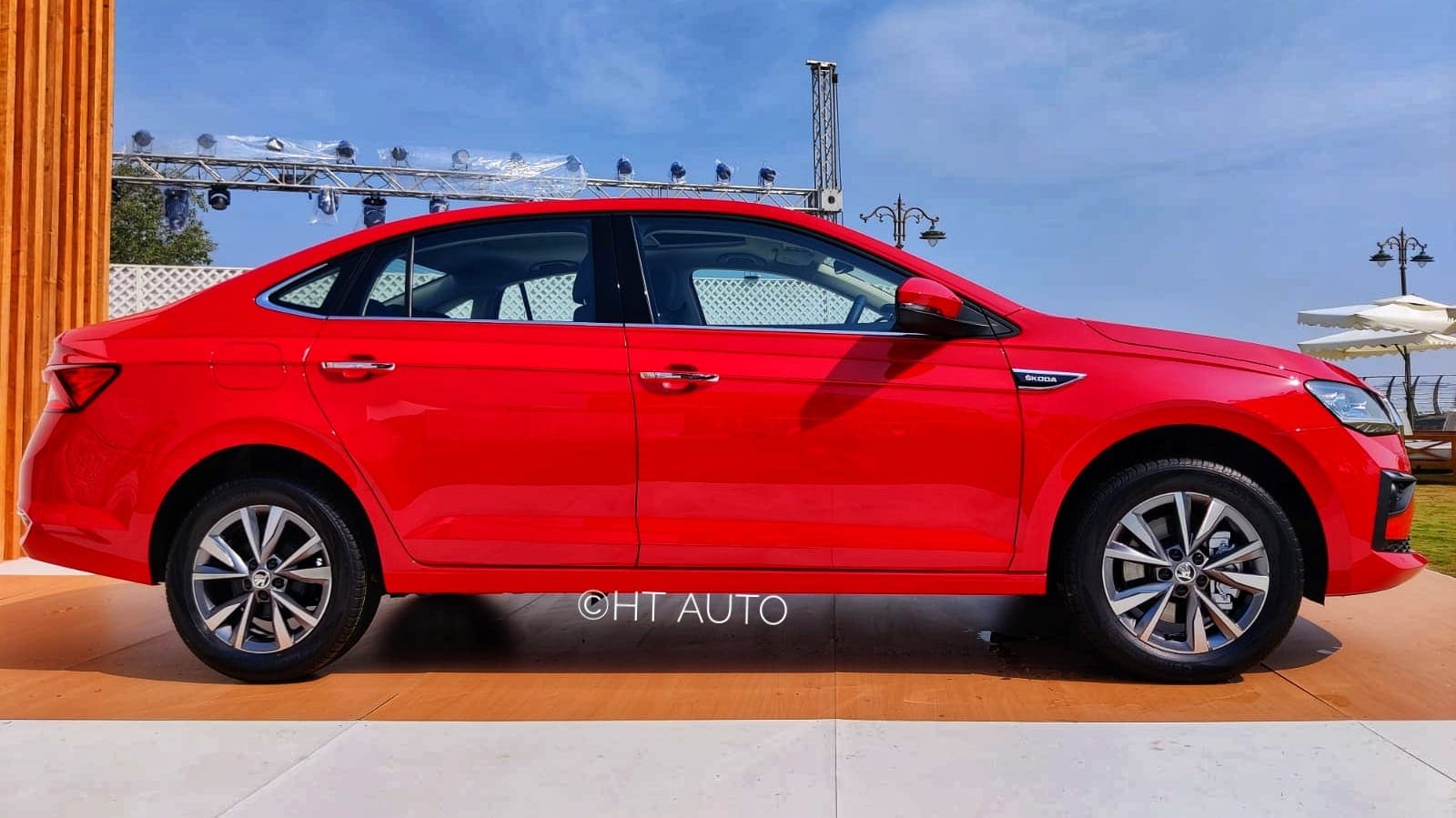 A look at the side profile of Skoda Slavia.

Move to the rear and personally, this angle is where the Slavia is at its best. C-shaped LED tail lights, clean lines, a thin chrome line on the rear fender and a slight over curve on the boot door gives it an elegant and modern appeal - very European. 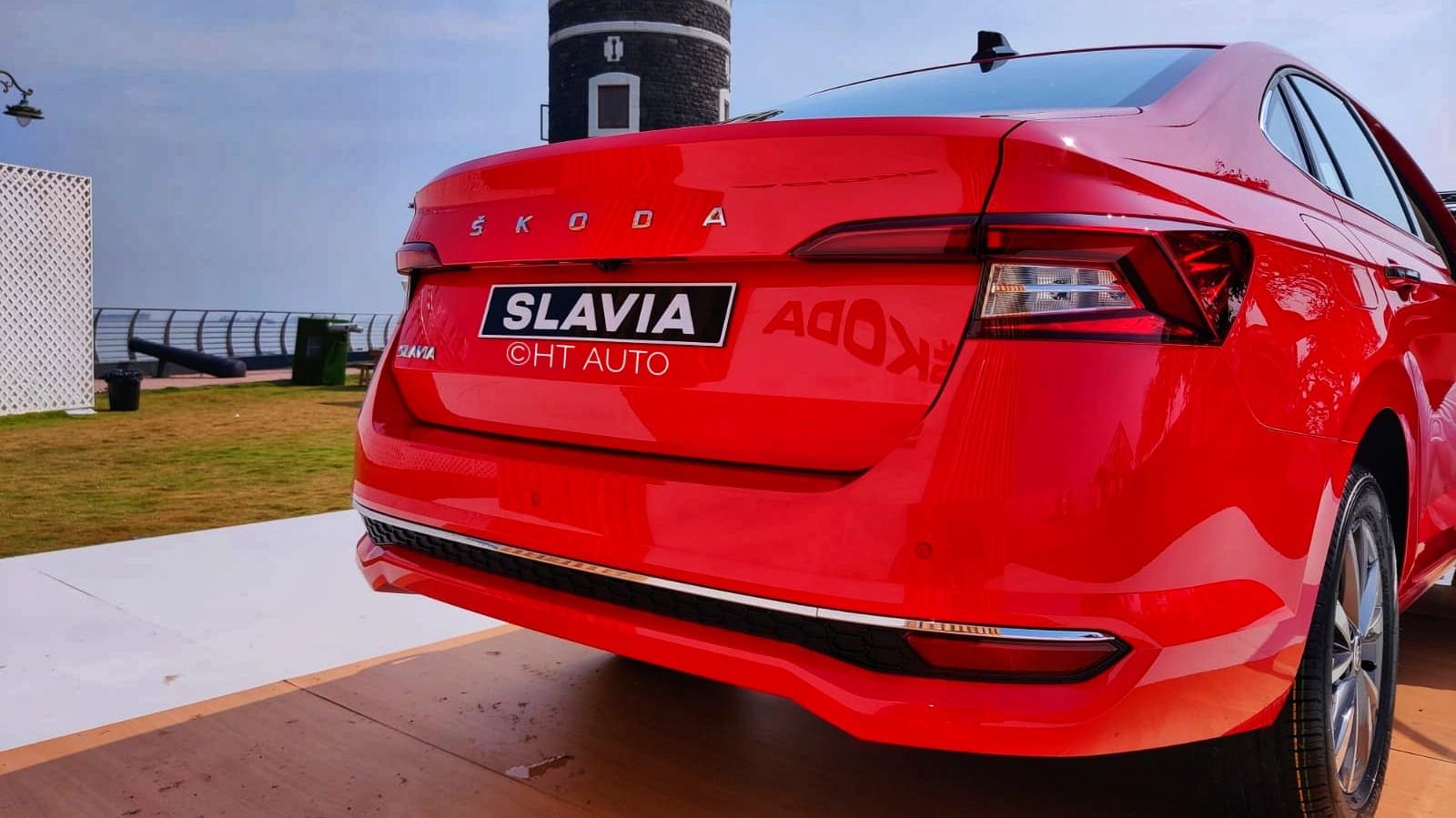 A look at the rear profile of Skoda Slavia.

Open the boot and there is 521 litres of boot space. Even if you trust your eyes more than numbers, it is evident that this is the biggest luggage space in the mid-size sedan segment, easily at that. It is also an indication that Skoda has burnt the night lamp to give attention to the cabin of the Slavia. 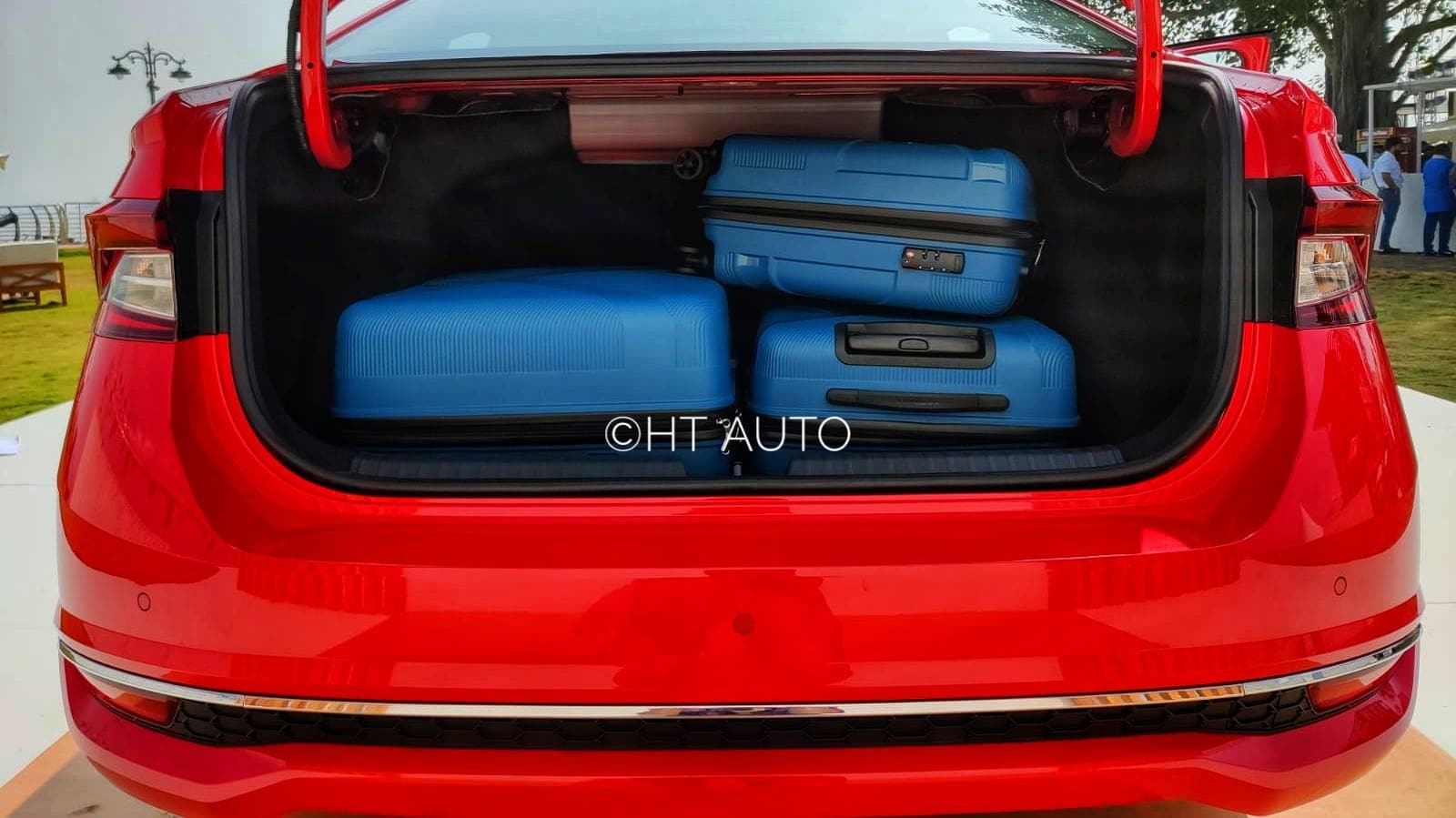 The boot of Slavia from Skoda is considerably larger than many of its rivals.

Skoda is projecting Slavia as a premium mid-size sedan and it is perhaps not a hollow claim. That is immediately evident once one steps inside the vehicle. Yes, there are hard plastics in places but the overall appeal of the car may well be more plush than any of its current rivals competing in the segment. There is a certain degree of indulgence that may have trickled down from elder sibling Octavia - a neat interplay of black and beige on the dash, inter-spaced with an inlay in piano black finish in the middle. The 10-inch infotainment screen is positioned close to the front seats to possibly cut out glare while the circular AC vents with bronze inserts, the sleek center console with storage spaces and the two-spoke steering with mounted controls are all quite upmarket. There is also an all-digital driver display and the front two seats have cooling functionality. 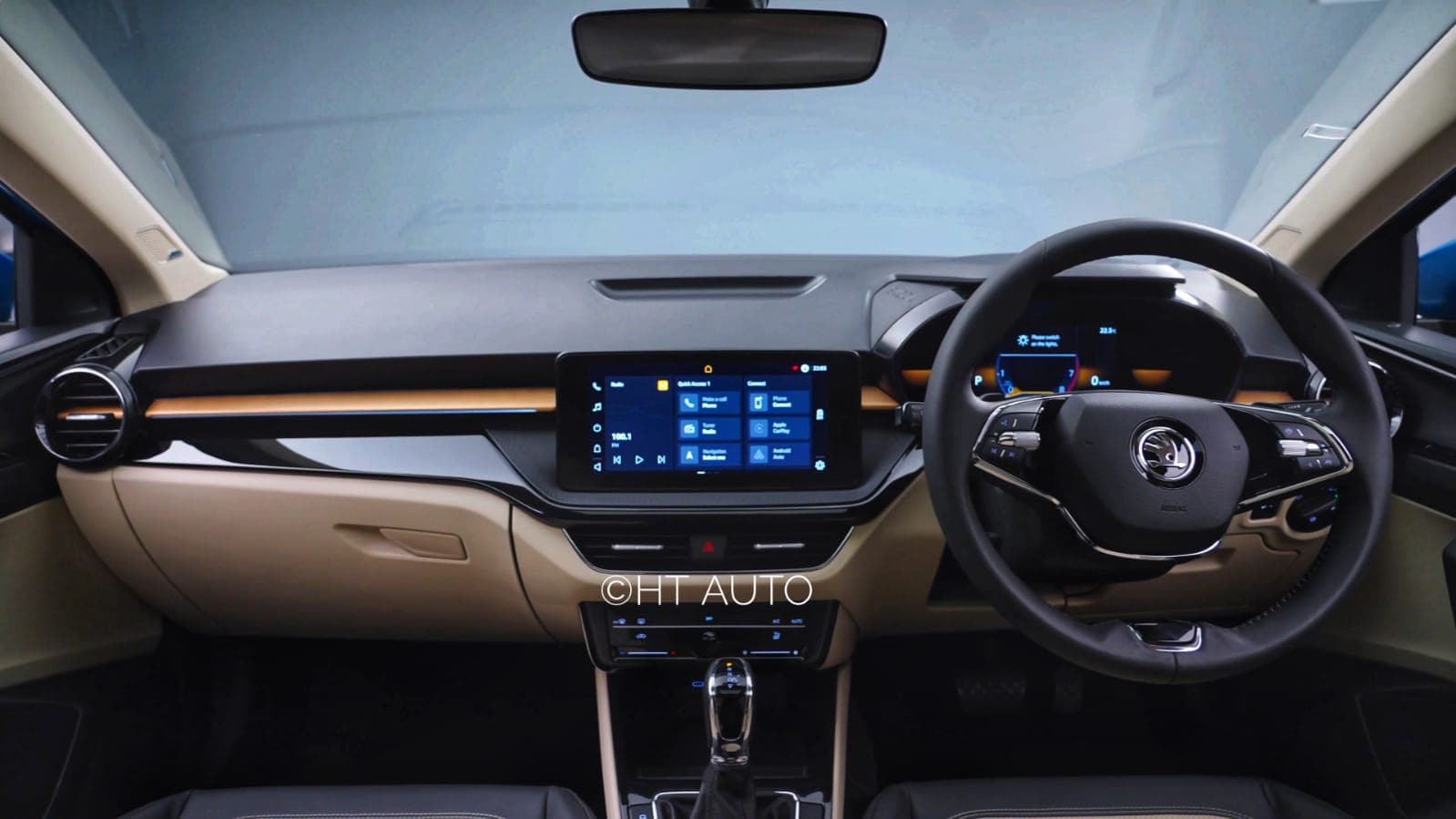 A look at the cabin of Slavia sedan from Skoda.

The black and beige seat upholstery on the seats has a pleasing effect on the senses and there is generous levels of leg and kneeroom for the passengers at the rear. Considering the width of the vehicle, three here would also likely to find no reason to complain while the headroom is par for the course. The back of the front seats have flap-like storage for documents which was the only slight let down for me.

Large windows all around and a conventional sunroof ought to make long journeys a breeze in the Slavia.

Once launched, Slavia will be powered by two TSI engines with 115 PS and 150 PS for the taking. There will also be three transmission choices - six-speed manual, six-speed automatic and a DSG unit.

Skoda is promising a safe drive experience with the Slavia and the sedan gets as many as six airbags in the top variant, ESC as standard and Multi-Collision Brake. Other highlights include Hill Hold Assist, rain and light sensors, cruise control, Tyre Pressure Monitoring System and more.

Skoda Slavia: A brave move in a new direction?

Skoda Slavia appears like a solid proposition and may well be a no-brainer for someone who may have been considering a sedan for some time now. It has the credentials to take on rivals like Maruti Suzuki Ciaz, Honda City and Hyundai Verna with gusto. And it is definitely leaps and bounds ahead of the Rapid which it replaces here. 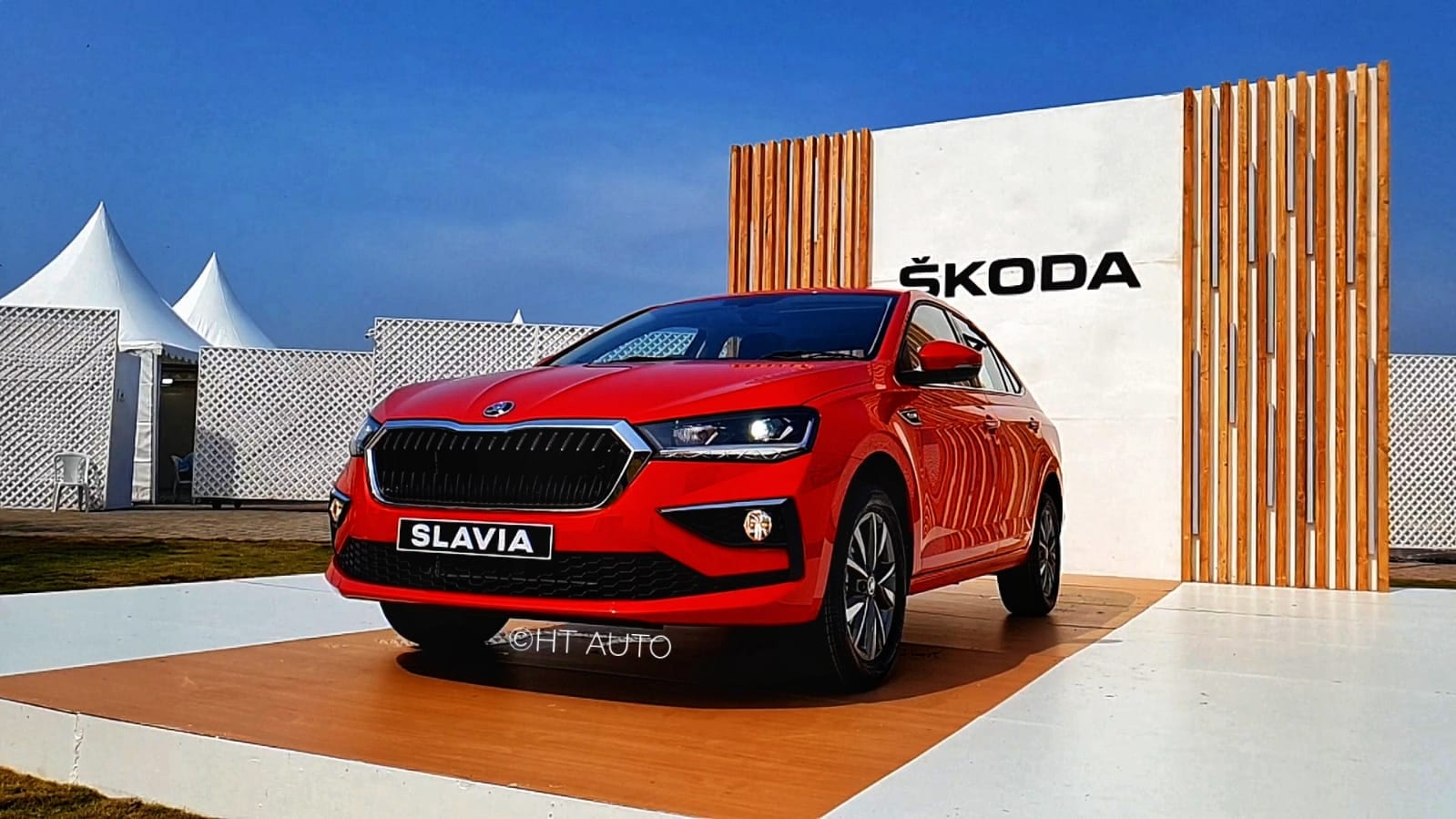 But the biggest competition for Slavia will perhaps come from all the SUVs that are currently on offer and the newer ones lined up for the new year. It is the mid-size sedan segment, and not the product, which is likely to be of some concern. I am assuming Skoda would have done its homework with Brand Director Zac Hollis telling me his team has its focus right. “The reason for the mid-size sedan segment being the way it currently is is that there has been nothing new. I won't say it is dying, it needs a product like Slavia," he says. “We wish to be a segment leader with the Slavia and I expect to sell around 3,000 units each month."

Considering the current segment leader in Ciaz sells an average of 1,200 units, Hollis' target is ambitious. But as far as initial impressions go, I have a feeling he knows just why Slavia could hit its intended numbers.