This is the first naked look at the premium mid-size Slavia ahead of its official debut on November 18 and expected to launch later this year.
By : HT Auto Desk
| Written By : Sabyasachi Dasgupta
| Updated on: 09 Nov 2021, 13:30 PM

Skoda has released the sketch of Slavia premium mid-size sedan which is going to debut officially on November 18.

Skoda has released the first look of the Slavia sedan. The sketch, shared on social media, gives the first naked look at the premium mid-size sedan which will make its debut on November 18. The launch is expected to take place later this year.

Until now, Skoda has been sharing the images and videos of the Slavia wrapped in a camouflage. The new sketch reveals how the Slavia will look like in real life. The front face gets a typical Skoda hexagonal grille flanked by sleek LED headlight units along with L-shaped LED DRLs. The bonnet also bears Skoda signature and is somewhat identical to that of the Octavia.

The profile of the Slavia will get character lines running across the window line as well the side skirts. The alloy wheels also look new and quite different from the ones shown in the camouflaged version. 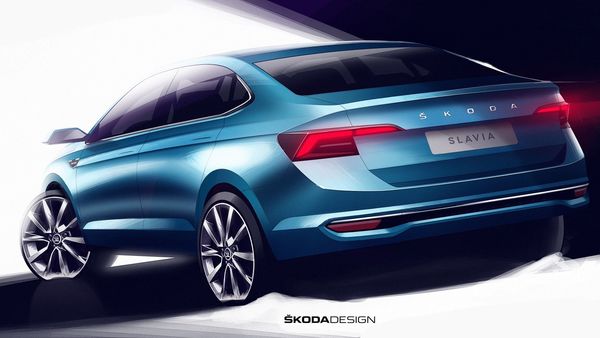 The rear section of the Slavia is also sharp with C-shaped LED taillight units. It gets a prominent Skoda badging on the bootlid, as well as rear apron with a chrome strip and two reflectors on the bumper.

Slavia is essentially seen as a successor to the carmaker's popular sedan Rapid. It will be Skoda's third model to be introduced in India this year. Based on the MQB-A0-IN platform, the 2021 Skoda Slavia stands 4,541 mm in length, 1,752 mm in width and has a height of 1,487 mm. The sedan will come with a wheelbase of 2,651 mm. It will come with a host of safety features including six airbags and more.

2021 Slavia will be powered by two TSI petrol engines, the same that also power the recently-launched Skoda Kushaq SUV. The 1.0-litre three cylinder TSI engine is capable of producing 113 hp of power. The 1.5-litre four-cylinder TSI has an output of 148 hp. The transmission job is handled by Skoda's six-speed manual gearbox, besides option to pick a six-speed automatic transmission in the 1.0-litre TSI or the seven-speed DSG gearbox in the 1.5-litre variant.