Kia Seltos SUV is the Korean carmaker's best-selling model since its launch. Kia's latest offering Carens too has clocked more than 7,000 units in March.
By : HT Auto Desk
| Updated on: 01 Apr 2022, 03:54 PM 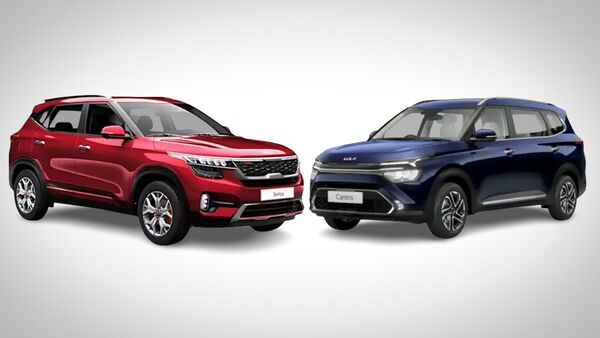 Kia Seltos (left) and Carens (right) have contributed majorly to the Korean carmaker's best sales performance since its India debut.

Overall, Kia sold 1,86,787 units in the last 12 months in India despite challenges like the global supply chain disruption due to the semiconductor shortage. Compared to the last financial year (2020-21) Kia has witnessed a growth of 20 percent during this period.

Hardeep Singh Brar, VP and Head of Sales & Marketing at Kia India, said in a statement, "2022 has been a good year for us so far, as we have been able to sustain our positive sales momentum in the past quarter. Our growing sales number can be attributed to our recently launched Carens, which has won Indian customers' hearts. We look forward to this outstanding positive trajectory continuing, backed by our revolutionary products and quality customer experience services."

Kia is also struggling with high demands and long waiting period for its cars. Waiting period for Carens three-row RV, which launched in February, has already reached nearly 50 weeks. Kia says it has started production in three shifts at its Anantapur facility to tackle the issue. "We are still in the recovery phase, as the semiconductor shortage remains a concern, which has affected our planned production. However, we assure our customers that we are vigilant of the trends globally and taking adequate measures to keep the waiting periods in check," Brar added.

Kia India recently crossed 5 lakh dispatches from the Anantapur plant, including 4 lakh domestic sales and 1 lakh exports to more than 91 countries in the Middle East, Africa, Central & South America, Mexico and the Asia Pacific since it started shipping Seltos in September 2019.

"The brand remains strong in the list of 5 best-selling car brands in the country, with 7 per cent market share in the domestic PV market in March. Kia India also recorded its highest-ever quarterly sales, clocking 60,062 unit domestic dispatches with quarterly 9.5 per cent year-on-year growth," the automaker stated.