Mercedes EQS is what happens when battery power meets the pinnacle of automotive luxury.The EQS from Mercedes has a claimed range of over 700 kms, gets two battery pack options and hits 100 kmph in 4.5 seconds.Despite the S in EQS, this Mercedes is a major departure and has a futuristic cabin.
By : Shubhodeep Chakravarty
| Updated on: 15 Apr 2021, 10:30 PM 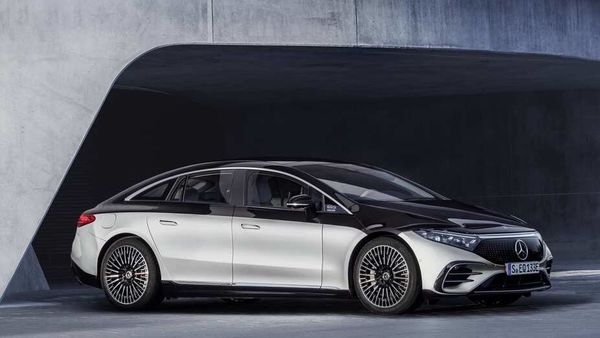 Mercedes held a digital event to showcase the EQS, its flagship electric sedan.

Minimalist design philosophy. Clean cabin layout. And a splitter-splatter of quirky features. Trust Mercedes to stay true to all of these and yet chart a whole new path as it opens a pathway into what luxurious electric vehicles ought to be like. A synthesis of clean yet futuristic elements all around and on the inside, the Mercedes EQS has finally made its world premiere and is, in all probabilities, the most opulent battery-powered option that money can buy. The EQS is the S-Class of electric vehicles (EVs) but then again, it promises to be a whole lot more.

Charge of the Thunder Brigade: 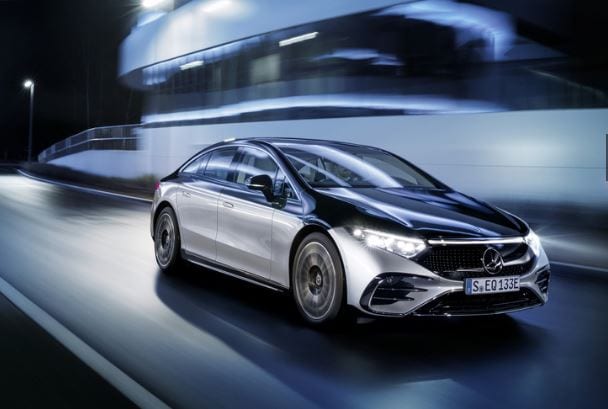 EQS has been built to offer unparalleled luxury while also being performance-oriented if it needs to be.

Charge of the Light Brigade may have been a brave albeit failed military action in the Crimean War but when it comes to the war being fought for dominance in the world of electric mobility, Mercedes EQS may have dealt a crackling blow.

One may have to be a General of a Fortune 500 company to be able to afford it but there's no doubt that in its exclusivity (also) lies its premium-ness.

EQS will lead the thunder brigade of electric vehicles from Mercedes and sits at the pinnacle of the company's EV portfolio which also has - or will have - EQA, EQB, EQC, EQV, EQE and an AMG EQ as well. And while each of these models promise a lot to its target audience, it is the EQS - and EQS alone - that is most likely to grab max attention.

Why? Obvious, isn't it 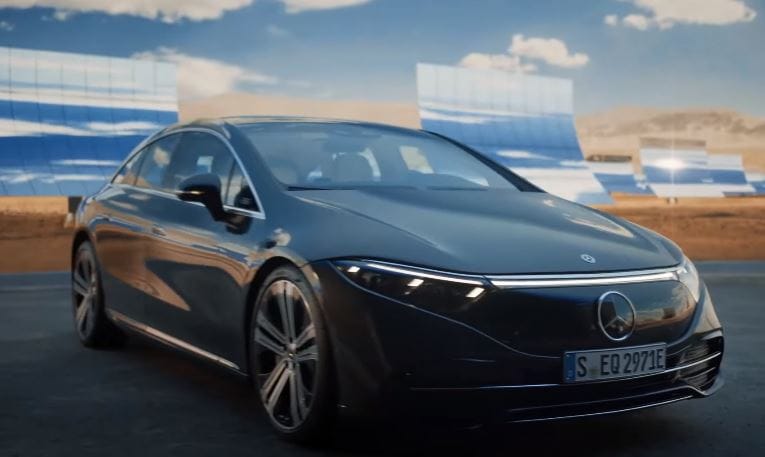 EQS wants to be the most sophisticated EV made so far. And this claim from Mercedes may be on point.

Tom Hanks received an Oscar for his role in the Hollywood movie Forrest Gump. If there was an Oscar for EVs, the EQS would stake a big claim. With a claimed range of well over 700 kilometres per charge, the Mercedes may outlast many of its direct and indirect rivals.

It may also outperform them.

At its core, EQS gets a choice between two battery packs - a 90 kWh or a high-performance 107.8 kWh. And because having a higher kWh doesn't ensure bragging rights, Mercedes states that the 107.8 kWh has 12 modules of around 9 kWh and the lithium-ion cells are NCM 811 type. What also helps the EQS, and massively so, is that it is touted as the world's most aerodynamic car. It has a drag coefficient of just 0.20Cd. This is even better than the drag coefficient of 0.22Cd on the 2021 S-Class. 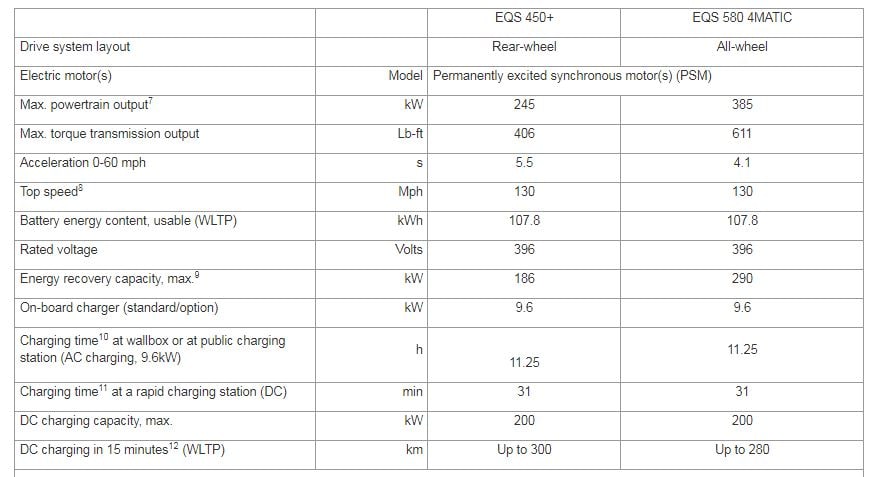 What these multiple factors also mean is that the Mercedes EQS can pounce to 100 kmph in just 4.5 seconds. Yes, the likes of Porsche Taycan EV and Tesla Model S are quicker but this Mercedes also weighs 2.5 tonnes when empty. To pull that much weight to triple-digit speeds in the time that Mercedes claims is indeed a marvel.

The Jarvis to Ironman on Wheels:

This EV from within is nothing short of an Ironman suit but with massively luxurious additions. But the major highlight, undoubtedly at that, is the ginormous 55-inch at the center that stretches from either extremities of the dashboard. Mercedes calls it MBUX Hyperscreen and it is an apt name. It combines a 12.3-inch digital driver display and a 12.3-inch screen for the front passenger with the 17.7-inch central screen in one uninterrupted flow of ultra-wide OLED spectacle. 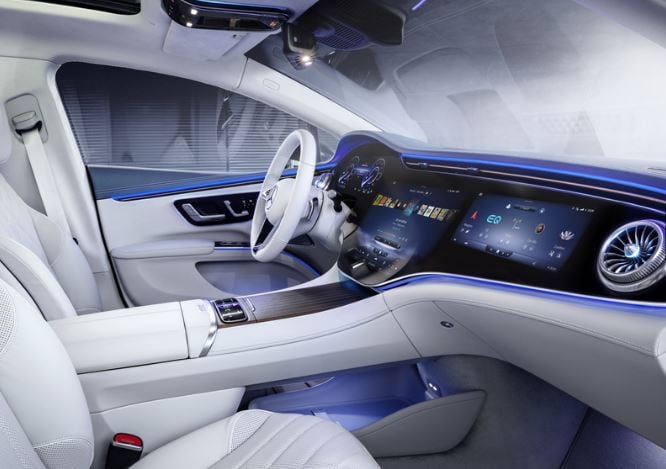 The MBUX Hyperscreen in the middle is what is likely to be the jewel in the crown of Mercedes EQS.

The two turbine-style air vents on either side blend into the hyperscreen space and the needle in a haystack would perhaps be found before one can locate physical control buttons on this car.

And if you're wondering about how much of a distraction the screen would be, Mercedes claims that the system will learn from driver and passenger habits and preferences, eventually displaying only what is deemed essential or preferred. Unless there's human intervention for more, of course.

It is but obvious that Mercedes would also walk the extra mile to make the EQS a safe car - not just for occupants but for those around it too.

As such, the sedan gets Acoustic Vehicle Alert System to warn pedestrians - crucial because of the drop-dead silent running character.

The battery, high-voltage (HV) cables and other HV components have been designed and protected in a way that would allow for automatic switch-off in case of potential danger.

In addition to driver and front passenger airbags, a knee airbag on the driver's side is also standard. There are window airbags too which claim to reduce the risk of head impact with the side window or penetrating objects. 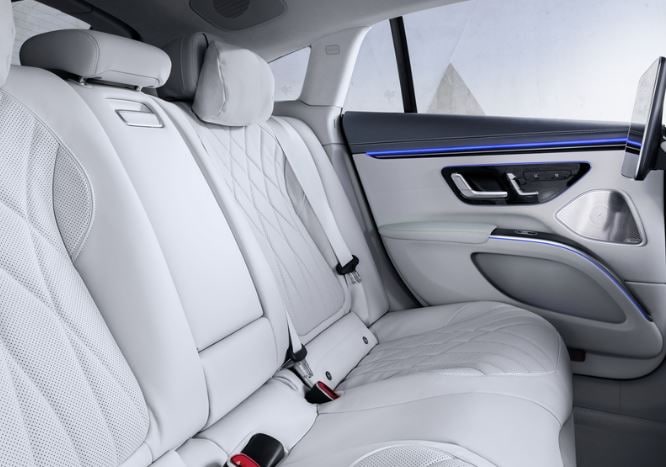 A look at the rear seats inside the Mercedes EQS, a place where the owner is most likely to spend most of his or her time in.

The EQS has a rather clean exterior design philosophy and yet looks like something straight from the future. The first product to be fully based on Mercedes' all electric platform, EQS has a smoothly-flowing front grille with the prominent Mercedes tri-star logo. Flanking it are the sleek LED head light units.

Its sweptback profile - hence the aerodynamic claim - adds to its sporty yet sophisticated touch while the rear profile is also kept typically clean, typically upmarket. 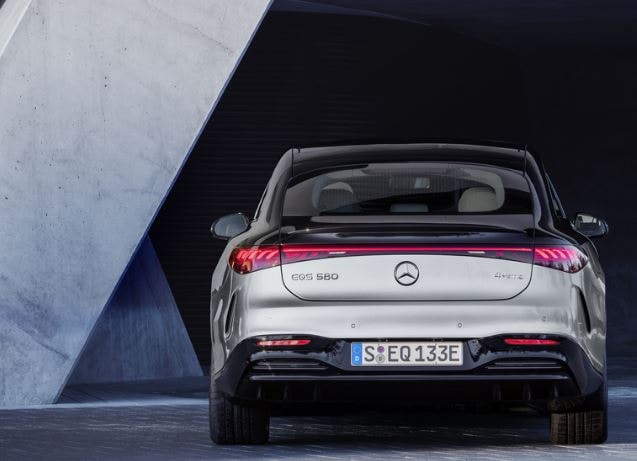 A look at the rear profile of the Mercedes EQS.

As mentioned previously, the Mercedes EQS isn't expected to be a common sighting on roads anywhere in the world. While the car maker hasn't officially revealed its price structure although a US launch is round the next bend, expect it to be the privilege of the rich and famous. And yet, numbers may not be what the chase is about because the EQS stands as a solid testament to what a company that is nearly a century old can do to stay forever young and dynamic.