Ford says that the kind of response Bronco has received is above internal expectations and it is now working on to ramp-up the production accordingly.
By : Prashant Singh
| Updated on: 02 Aug 2020, 09:07 PM 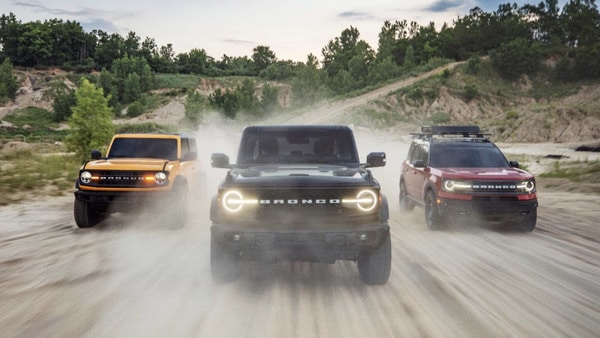 Ford recently announced that with in just 15 days of its debut, Bronco SUV has managed to garner over 1.5 lakh bookings. It has been slated to be launched in the fourth quarter this year.

The company said that the kind of response Bronco has received is above internal expectations and it is now working on to ramp-up the production accordingly.

As per Ford, the new Bronco SUV has been designed from scratch and some of its elements such as circular headlamps, bold Bronco lettering on the grille, and the overall silhouette have been intentionally kept like its predecessor.

Taking on the likes of Land Rover Defender and the mighty Jeep Wrangler, the new-gen Ford Bronco will help the company to target an immensely popular- lifestyle SUV segment in the American market.

The Bronco will be offered in two body styles - two-door and four-door. And just like its segment rivals there will also be a Sport version of the SUV as well. It will also receive the 'Sasquatch' pack which promises equipment such as 35-inch tyres on 17-inch beadlock wheels, upgraded off-road suspension, and front/rear locking differentials.

(Also Read: Ford and Volkswagen electric models may be delayed by trade-secret fight)

Mechanically, it will feature the popular 2.3-litre, four-cylinder, ecoboost petrol engine that's rated to push out 266 PS of power and 420 Nm of peak torque. The engine will be mated to a Getrag sourced 7-speed manual transmission as standard. There will also be a Ford Endeavour (Ford Everest) sourced 10-speed automatic transmission as an option.

The Bronco will also be offered with a 2.7-litre, V6 Ecoboost petrol motor with 306 PS and 542 Nm of peak torque on tap. The unit will be mated to a 10-speed automatic transmission as standard.