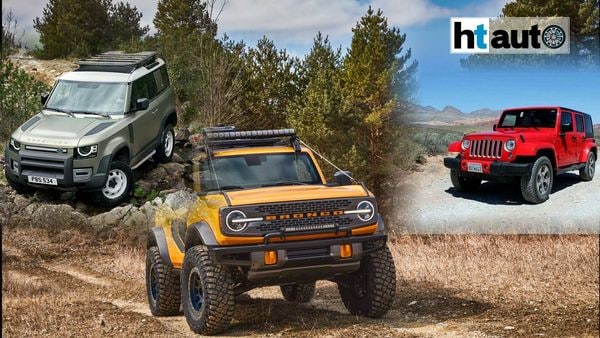 With three new, iconic off-road rigs on the loose, it is difficult to pick any one as the best.

Talk about timing. Decades after their inception, and while their vintage versions continue to fetch triple digits at auction, the Ford Bronco and Land Rover Defender have returned. And all the while, arch-rival Jeep produces 200,00 Wranglers every year and counting.

Any of the three rigs can hold its own crawling through rocks and mud in the real world. But there can be a big gap among them in cost: The two-door Wranglers and Broncos start around $29,000. The two-door Defender? More than $65,000.

Price differential is relative when you start considering the myriad variants available for each model. You can upgrade to 35-inch rubber wheels on the Sasquatch version of the Bronco or, on the Badlands version, opt for exclusive suspension with a hydraulic front sway-bar disconnect and 17-inch machine-face aluminum wheels.

The Jeep Rubicon gives the option of Tru-Lok differentials for the front and rear and an electronic Front Sway Bar Disconnect, which helps your left and right front tires move independently of each other. And if you want 20-inch, 5-spoke dark gray brake calipers, well, the Defender 110 SE has got those.

It also depends on how many doors you want: The four-door Wrangler and Bronco are more expensive than the two-doors, both near $37,000. The four-door Defender, at about $50,000, costs less than its two-door version.

The range of options can skew emotions and muddy the waters about what anybody really needs to forge through the sand, snow, and empty riverbeds these vehicles are meant to dominate.

It’s a lot to take in. So here are the high points about each one, broken down into bite-size pieces.

For the True Off-Roader

Legendary for and since its service in World War II, Wrangler has helped Jeep quadruple US sales since 2010. It is the prime mover in Fiat-Chrysler's growth strategy; last year, Fiat-Chrysler sold one somewhere in the world every two minutes.

The Wrangler is the cheapest of this group, but that can be an asset: It comes bare-bones in empty stock form, easy enough to make your own using aftermarket manufacturers, or to leave it minimal, for maximum rock climbing. While the other options on this list come with dual-zone climate controls, entertainment systems, keyless entry, and power windows, the two-door base Wrangler comes standard with some manual windows, manual seat adjusters, a steering wheel, and pretty much nothing else.

It does offer five different tire-manufacturer options, including an optional mud-terrain tire for the Rubicon variant. It can come with full-time all-wheel-drive, too—a benefit in some situations and not in others, so choose wisely according to what you need most for your lifestyle.

Under the hood, both the standard two- and four-door Wranglers have a turbocharged 3.6-liter V6 engine with 285 horsepower and 260 pound-feet of torque. Like the Defender, it comes with an eight-speed transmission and electronic-locking differentials at both ends, which means they can all make the wheels hold firmly in place to the axle or turn freely, as traction and terrain dictate. The advantage here means that if only one wheel is slipping, you can lock it in step with the others that have more traction and drive yourself out of that tight spot.

And it’s great at using its small, punchy body and engine to navigate up and down steep grades. The two-door Wrangler's 25 degrees of breakover (the highest angle a vehicle can drive over a hill without scraping underneath) handily beats the two-door Bronco’s 21.1 degrees. In the four-door setting, the Wrangler’s 20.3 degrees roughly equals the Bronco’s 20.

In short, the standard, base-version Wranglers come home from the dealership very stripped-out and are loud to drive, abrupt to steer and brake, alternatively hot and cold inside, and generally pretty raw. Then again, that’s why we love them. You can always option it out if you want more.

For the Wanderer with a Sense of Style

The Bronco illustrates the hoped-for comeback of a model made popular in the 1960s and ‘70s for off-roaders and ranchers alike but sullied by the infamous slow-motion police chase after O.J. Simpson in 1994. (It was discontinued in 1996.) Now, thanks to the fact that it’s built on cost-saving, existing platforms also used by the Escape and Raptor, Detroit’s automaker has a chance to ramp up to the same kind of sales numbers as the Jeep, even if it’s unlikely ever to eclipse the massive success of the F-150.

The new model fills a happy medium between creature comforts and factory options, with a reasonable pricing structure. The base Bronco offers cloth seating, single-zone climate control, and the convenience of standard, removable doors. You can also choose among three different wheel sizes and five tire models from four different manufacturers, including 35-inch mud tires with the special “Sasquatch" package.

The two- and four-door Bronco both come standard with a turbocharged 2.3-liter inline-four engine with less horsepower than the Wrangler (270), but more pound-feet of torque (310). In base form, the Bronco even has a seven-speed manual (!) transmission—but this is available only with the four-cylinder engine, and manual these days is more about bragging rights and personal preference than any genuine driving superiority. All of the bigger-engined Broncos get the 10-speed automatic transmission.

But while it offers four drive ratios, the Bronco lacks both a limited-slip differential and a live axle in the front. (Live axels actively help transmit power to the wheels; “dead" axels do not.) Instead, it uses unequal-length control arms for the independent front suspension. That basically means the wheels on the Bronco’s axle will react independently but disparately to bumps on the road. For all the traction benefit it achieves, you sacrifice the automatic, full-on power of equal torque to both wheels when driving straight, as well as automatic adjustment to separate wheels.

The base Bronco has less clearance than the Wrangler, but if you upgrade to the Sasquatch edition, it’s better than the upgraded Jeep: 11.6 inches of clearance compared to the Jeep Wrangler Rubicon’s 10.8. The higher Bronco Sasquatch also allows better fording ability, with 33.5 inches available—3.5 inches more than the Rubicon.

Finally, it’s difficult to tell from just looking at them, but the two-door Bronco's 100.4-inch wheelbase is longer than the Wrangler's 96.8 inches, so those who want a little more room for storage—or just to stretch out—will be wise to look here.

For the Traditional Overlander with a Taste for Finer Things

Rover’s Defender, iconic since its Land Rover Series emerged in the 1940s, returns after it was discontinued in 2016. Land Rover actually stopped selling them in the U.S. back in 1997, which gives you an idea of how few they were making at the time. In 2015, roughly 23,000 of them sold worldwide.

The new Defender is Land Rover’s attempt to increase its global scale to better compete with Daimler's bigger Mercedes-Benz unit, BMW, and Volkswagen AG, and to grab more of the $488 billion truck, SUV, and crossover market worldwide. After a massive overhaul, mainly to bring emissions and modern comforts up to date, Rover thinks it’ll work worldwide, even if it’s a mere four years after discontinuing the model. (It doesn’t hurt that the Defender brings with it the cachet of Mr. James Bond, since it held a starring role in Spectre.)

By far, the Defender packs the most luxury into its factory-produced versions. Included in the base model of the two-door Defender are privacy glass, heated and power-folding mirrors, leather trimming on the gearshift and steering wheel, two-zone climate control, footwell lighting, metal treadplates, 12-way heated seats, keyless entry, and a bevy of entertainment systems that include Meridian surround sound, Sirius radio, and a 10-inch touchscreen with integrated driver display. It also offers, among its four options, cool, retro-gloss 18-inch steel wheels.

For those who want the most advanced power technologies, high efficiency, and a sharp, capable throttle feel at even high rpms, the Defender offers the best options here, too: The standard Defender 110 (four-door) has a 296-horsepower, turbocharged, 2.0-liter, four-cylinder engine; the standard Defender 90 (two-door) has a turbo-and-supercharged 395-horsepower, inline-six engine and 48-volt hybrid motor. It has a 10-speed automatic transmission and full-time all-wheel drive.

Land Rover has said it will also sell a plug-in hybrid variant of the Defender in the coming year as well. There’s even a diesel engine option, though it’s not currently offered in the U.S.

Off-road, it has whopping breakover angles of 31 degrees for the two-door version and 28 for the four-door model. It has an approach angle of 38 degrees—the number that determines clearance on a hill before the car hits something. (Psst: If you get bigger tires for your rig, you can improve any of these angles.) It has higher clearance, too, than the Wrangler and Bronco, plus more than twice the towing capacity.

The takeaway: The Defender on the whole will still get you into—and out of—more places than the others. You’ll just have to pay more to do it.

A Note on Availability

Deliveries of the Bronco won’t start until 2021, starting with the Bronco Sport at the end of the year. The earliest Defender deliveries will happen by the end of 2020, if Land Rover’s estimates are correct, though the 110 version is available to order now. The Jeep Wrangler is widely available.