Land Rover Defender launched in India: All you need to know about true blue SUV 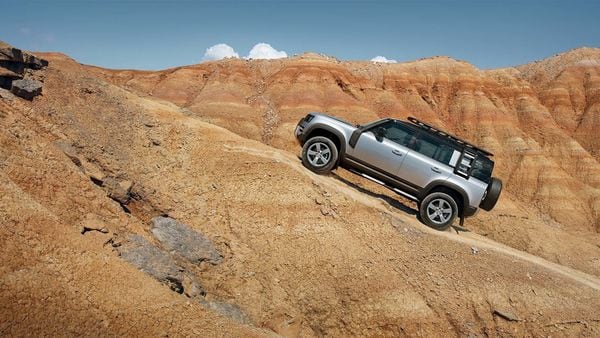 Defender has long been known for its capabilities to tackle and tame almost everything that the wilderness poses as a challenge. The SUV has been raved for its ability to hold it own on rough terrain and on inclines and declines of varying degrees. In its most-recent version, the Defender enhances its capabilities and promises to pack even more punch.

Launched in India on Wednesday at a starting price of ₹69.99 lakh (ex showroom), the new Defender makes a solid case for itself as the preferred vehicle in tough conditions. Powered by a 2.0-litre petrol engine, the Defender now belts out 300 Ps of power and has maximum torque of 400 Nm. It has been made available in two different body styles - 90 (3 door) and 110 (5 door), and will be brought in via the CBU route (Completely Built Unit).

On the safety front, the SUV is packed to the brim and gets 360° Surround Camera, Wade Sensing, Electronic Air Suspension (Standard on 110), Smartphone Pack, Connected Navigation Pro, Off-Road tyres, etc. It also gets a refrigerated compartment in the center console as an option.

The Defender from Land Rover has been extensively tested for its capabilities in demanding conditions and also features in the upcoming James Bond film - No Time to Die. In some of images of the car shared by Land Rover, the Defender is seen performing astounding stunts as part of the shooting for the movie. In real life and in actual test of character, the SUV is likely to continue performing as per excpectations.