2021 Porsche Cayenne Turbo GT is based on the Cayenne Coupe Turbo and is Porsche’s most powerful internal combustion engine-only SUV yet.The 4.0-liter twin-turbo V8 engine can generate 631 horsepower and 849 Nm of torque.
By : HT Auto Desk
| Updated on: 30 Jun 2021, 12:15 PM 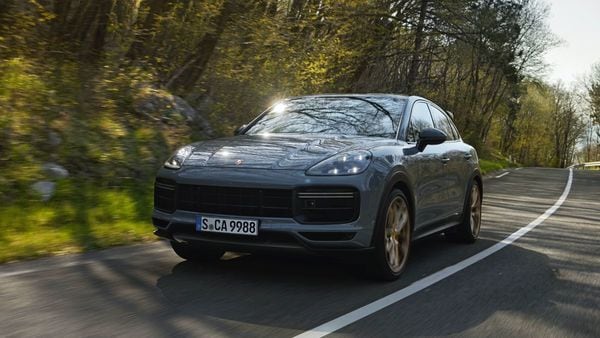 The powerful V8 engine, mated to an eight-speed Tiptronic S automatic transmission, allows the Porsche Cayenne Turbo GT to be able to sprint from zero to 100 kmph in just 3.3 seconds and reach a top speed of 300 kmph. Compared to the Cayenne Turbo Coupe, it is 0.6 seconds faster in the 0-100 kmph sprint and 14 kmph of top speed.

The SUV recently set a new SUV lap time record in the Nurburgring Nordschleife track ahead of its launch. The SUV completed a lap around the 12.94-mile configuration of the Nurburgring in seven minutes 38.925 seconds, beating the previous record of seven minutes 42. 253 seconds set by Audi RS Q8.

Despite all its technical potential, the Cayenne Turbo GT will also stand apart from the other members of its range in terms of style. Its sporty stance is reinforced by the front bumper with a striking spoiler and larger side air intakes, the carbon roof, the black wheel arch flares, the GT Design wheels in Neodymium colour, the specific carbon sipes placed along the rear spoiler, the rear carbon diffuser and the extendable rear deflector lip, 25 mm wider than that used on the Cayenne Turbo Coupe, capable of increasing downforce up to 40 kg at full speed.

Inside, the new Cayenne Turbo GT gets more extensive use of Alcantara, as well as the perforated Alcantara upholstery of the central section of the front and rear seats, both exclusive to the Cayenne Turbo GT. It is also equipped with contrasting elements in Neodymium or Arctic Grey. The front sports seats have eight-way electrical adjustment and the designation 'Turbo GT' on the headrests, the multifunction sports steering wheel has a central yellow marking, and the latest generation of the PCM (Porsche Communication Management) infotainment system with a new interface.