Tesla Cybertruck was first showcased in November of 2019.Cybertruck will be manufactured at the upcoming Tesla facility in Texas.First expected to be delivered at some point in 2021, timelines may have now been pushed back to 2022.
By : HT Auto Desk
| Updated on: 26 May 2021, 09:14 AM 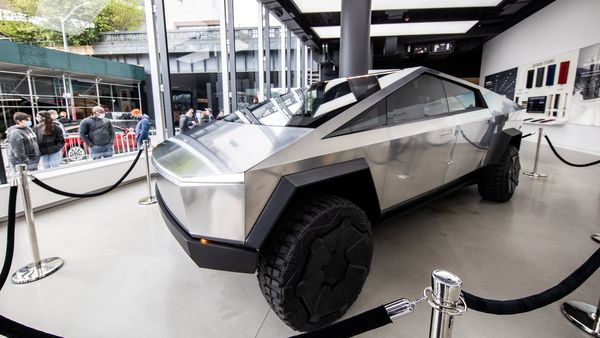 Tesla created a massive buzz when it first showcased the Cybertruck to the world back in November of 2019. And despite the pandemic-hit world changing dramatically since then, Tesla has managed to keep most of the buzz surrounding its first ever electric pick-up alive with the latest reports suggesting that over one million reservations have been received so far. Deliveries, however, have been delayed and while it was initially expected to start at some time this year, may now happen next year.

(Also read: Elon Musk drives in at Tesla’s Texas Gigafactory in a Cybertruck)

The battle for supremacy in the electric pick-up segment may be recent but it is absolutely intense, especially in the US where customers have a growing preference for larger and more imposing vehicles. Ford recently launched its F-150 Lightning with a starting price just under $40,000. While this particular model has mostly received a positive initial response, it is the Cybertruck that is still likely to draw maximum crowds.

Analysts mostly agree that one of the main reasons why the Tesla Cybertruck has received high volume of reservations despite no confirmed delivery timeline is because the reservation amount at the showcase event was at just $100 (around ₹7,200). And this was refundable. Little wonder then that Tesla CEO Elon Musk had announced the company received quarter of a million reservations in just one week since Cybertruck was showcased to the world. A crowdsourced reservation tally for the Cybertruck now puts the figure at over a million.

Booking is easy. Production may not be. And supply-related issues have been a headache for Tesla time and again. The California-based company is looking at making Cybertruck hit production lines by the end of this year at its upcoming facility in Texas. The two models - with 300 and 500-mile range - are claimed to be the most powerful among rivals but the market is seeing the list of rivals increasing in the times to come. While Ford has made strong moves, Hyundai recently drove in its a lifestyle utility pick-up called Santa Cruz. Even GM brought back the iconic Hummer with an electric heart. Then there is the Rivian R1T and Lordstown Endurance threatening from the sidelines.