Nissan Magnite gets 32,800 bookings in 1 month, most introductory prices to stay

Except for the base variant, all other variants to continue with the introductory prices announced at launch.Made-in-India Magnite will soon be exported to Indonesia and South Africa.Nissan is adding a third shift at its manufacturing facility to meet with demand for Magnite.
By : Shubhodeep Chakravarty
| Updated on: 04 Jan 2021, 14:29 PM

Nissan Magnite is the most affordable sub-compact SUV in the Indian market currently.

Nissan Magnite has had a rousing one month since being launched in the Indian car market as the most affordable sub-compact SUV on December 2, receiving 38,200 bookings. The car maker has confirmed that introductory prices of all variants of Magnite, except the base variant priced at ₹5.49 lakh (ex showroom), will continue to remain valid. 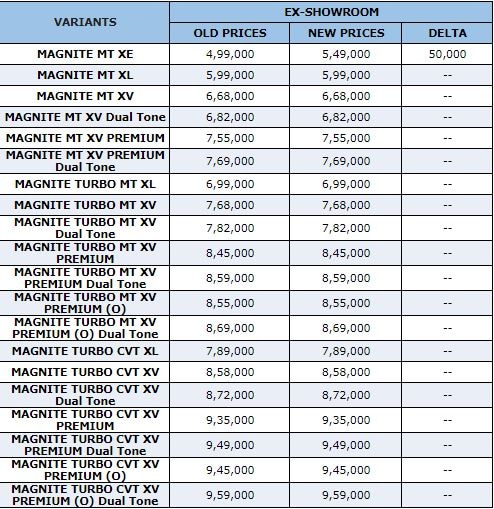 Nissan underlined the massive demand and interest in Magnite, and said that it is adding 1,000 additional employees and adding a third shift at its manufacturing facility in order to reduce the current waiting period spanning up to three months. "Customers have given their overwhelming response with record level of bookings and as our token of our appreciation, we would like to continue the special introductory price till further notice." said Rakesh Srivastava, Managing Director, Nissan Motor India.

Srivastava also confirmed that Magnite will soon be exported to Indonesia and South Africa from here.

Magnite is much like a lifeboat for Nissan as it looks at redemption in the Indian car market. The decision to offer a product in the lucrative sub-compact SUV segment came about as both an obvious choice and a challenging decision because of the intense rivalry at play. The company doesn't have the widest sales or post-sales network but says it is committed to expanding its physical and digital presence to support customers. While there are no plans yet of adding to the number of sales channels, Nissan is confident that the interest in Magnite isn't just because of its novelty factor but because it is a capable vehicle.

Speaking to members of the press at a virtual press conference on Monday, Srivastava explained that customers are increasingly preferring the upper variants of Magnite. "There is a lot of interest among buyers for Magnite's looks and its drive dynamics. The demand means that we are adding 5,000 people to our overall workforce and adding a third shift at the manufacturing facility," he said. Asked about plans of providing a reliable post-sales network, he added that a combination of digital and real-world means are being employed to not just reach out to new customers but also cater to the needs of existing ones.

Powered by a 1.0-litre petrol engine which is available in both naturally aspirated as well as turbocharged versions, Magnite also gets a five-speed manual as well as an X-TRONIC CVT gearbox. The car has an optional Tech Pack for around ₹38,000 which puts in ambient lights, premium music system, wireless phone charging - among others, and has a number of single and dual-tone colour options.

The Magnite recently secured a four-start safety rating in the ASEAN NCAP crash tests and while the model put to the test was made in India, it is not clear if it is also one that is made for India. (Full report here)