Nissan Magnite SUV was launched in November last year as the most affordable sub-compact SUV in India.
By : HT Auto Desk
| Updated on: 04 Jan 2021, 02:04 PM 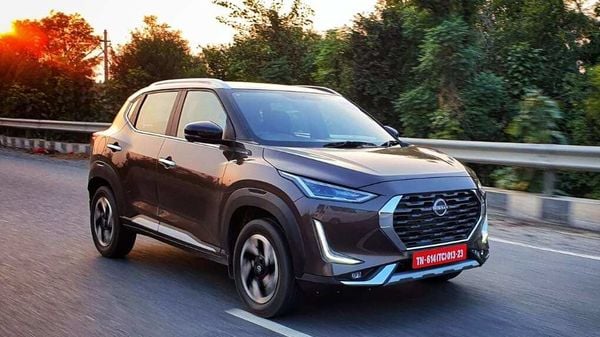 Nissan Magnite SUV promises to shake up the sub-compact SUV segment a bit more with its bold styling, attractive feature list and an expected aggressive pricing.

Nissan's latest offering in India - Magnite SUV - has passed its first major crash test at the ASEAN NCAP comfortably. The Nissan Magnite SUV secured a four-star rating at the crash test which was conducted two days ago. The model tested is made in India but it is not clear if it is also a model being made for India.

Sharing the results of the crash test, the ASEAN NCAP issued a statement saying, "The New Car Assessment Program for Southeast Asian Countries (ASEAN NCAP) had recently performed an assessment on the model Nissan Magnite, the second assessed model under the Nissan brand in year 2020. Based on the overall score, ASEAN NCAP is pleased to announce that the new Nissan Magnite had successfully obtained 4-Star ASEAN NCAP rating in the assessment. Details of the results will be released soon."

Magnite is Nissan's massive show of intent in the India, a market that it has been unable to make much mark in despite years of being present here. The Japanese car maker is betting big with its latest but is aware that it will also have to ramp up sales and service outlets.

Nissan Magnite sub-compact SUV went on sale in the Indian market earlier this month at ₹4.99 lakh (ex-showroom, Delhi). The Japanese carmaker has managed to generate quite a buzz around its Kia Sonet rival in India. The firm recently announced that it has received over 15,000 bookings for the new car.

The Magnite SUV sources power from a 1.0-litre petrol engine which is available in both naturally aspirated as well as turbocharged versions. The transmission options include a five-speed manual as well as a CVT unit.

Mated to either a five-speed manual or an X-TRONIC CVT gearbox, Nissan's latest looks at offering a convenient yet peppy drive option in both city as well as highway road conditions. Nissan claims the new HRA0 engine borrows 'mirror bore cylinder coating' technology from its legendary sports car model - Nissan GT-R. This technology helps reducing resistance inside the powertrain. It also aids in cutting weight, improving heat management and combustion, thus improving the overall efficiency of the engine.

Magnite also claims to be frugal when it comes to sipping fuel. The ARAI-certified fuel efficiency of Magnite turbo engine with five-speed manual transmission is 20 kmpl. The option with CVT returns 17.7 kilometres per litre of fuel.