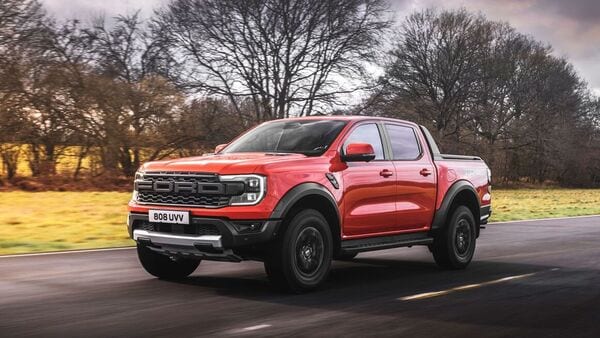 One of the key highlights of the new model is its 284bhp, 3.0-litre V6 petrol engine which comes out as a replacement to the previously found 2.0-litre diesel engine.

The new generation Ford Ranger Raptor performance pick-up truck has broken cover. The new model has received a host of performance as well as feature updates for 2022. Ford claims that the latest update has given the truck better off-roading capabilities.

One of the key highlights of the new model is its 284bhp, 3.0-litre V6 petrol engine which comes out as a replacement to the previously found 2.0-litre diesel engine. Apart from more power, the new engine also belts out more torque which stands at 491Nm. The company claims that the new engine block of the updated truck is stronger than the traditional iron unit. The powertrain also features an anti-lag system which was originally developed for the firm’s GT road car.

The new Ranger Raptor now comes fitted with a full-time four-wheel drive system with an on-demand two-speed transfer case, combined with front and rear locking differentials. In addition to that, other notable additions include seven selectable drive modes and an electronically controlled active exhaust system. The truck uses a bespoke chassis and it also gets Raptor-specific mounts and reinforcements that help it to face more hardcore and punishing driving conditions.

The truck has also received an upgraded suspension setup in the form of the Fox shock absorbers. These units are claimed to be the most sophisticated ever to be ever featured on a Raptor. These units are filled with a Teflon-infused oil that reduces friction by about 50% against the existing model.

Dave Burn, Ford Performance chief programme engineer for Ranger Raptor, said: “We knew that customers would expect improved performance with the Next-Gen Ranger Raptor, but I’m not sure they’re really expecting the enormous leap we’ve made. It’s a seriously fun truck to drive and I think the raw performance is going to blow them away."

The truck is slated to arrive in Europe this summer followed by its customer deliveries.