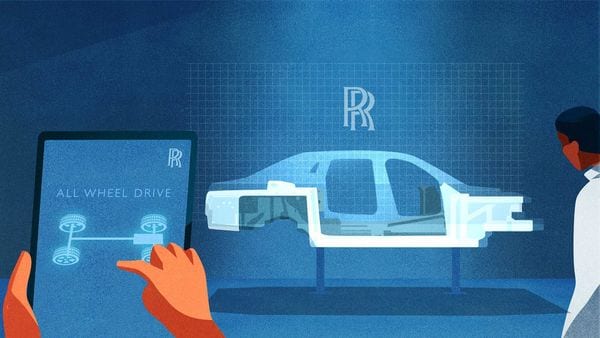 The new technologies promise to make the Ghost not only better to ride around in but also to drive.

Luxury carmaker Rolls-Royce has released a teaser video detailing some of the new Ghost's suspension and drivetrain technologies. The new technologies promise to make the Ghost not only better to ride around in but also to drive.

The design brief for the new Rolls-Royce Ghost was to make sure that it offered customers the most accessible luxury experience possible. It had to be supremely comfortable and luxurious for passengers wanting to relax, while also being enjoyable to drive for customers that want to actually spend some time behind the wheel. It also needed to be usable in all weather.

To fulfil this challenging brief, Rolls-Royce’s engineering experts rejected the use of a pre-existing platform. Instead, they configured the marque’s proprietary spaceframe architecture to incorporate elements of the brand’s existing model portfolio such as all-wheel drive and all-wheel steering, while adapting the structure to accommodate significant advances in Rolls-Royce’s hallmark magic carpet ride and dynamic abilities.

A key development was the Planar system, which is comprised of three elements. The first is an Upper Wishbone Damper unit, which is mounted above the front suspension assembly and creates an even more stable and effortless ride. The result of three years of development, this is a world-first technology. The second is the Flagbearer system, which uses cameras to read the road ahead and prepare the suspension system for any changes in road surface. The third is Satellite Aided Transmission, which draws GPS data to pre-select the optimum gear for upcoming corners. The Planar system allows new Ghost to anticipate and react to even the most demanding road surface.

During the engineering design process, new Ghost’s chassis and suspension specialists were tasked with regularly presenting the technical advances they had made to other departments, as well as showcasing how these remarkable developments met the client brief. Rolls-Royce has elected to share elements of these internal briefings to demonstrate the engineering substance that underpins this extraordinary new motor car ahead of its official unveiling in autumn this year.

New Ghost Engineering Lead, Jonathan Simms, says, “Ghost clients told us that it’s the car in their collection that they’re drawn to the most. They love its uncomplicated versatility. It’s not trying to be a sports car, it’s not trying to be a grand statement – it’s simply exceptional and exceptionally simple. When it came to creating a new Ghost – one that outshines its incredibly capable predecessor – the engineering team had to start from scratch. We pushed our architecture even further and created a car even more dynamic, even more luxurious and, most of all, even more effortlessly useable."

The marque chose the popular and aesthetically appealing medium of animated illustrations to convey these insights. Rendered first by renowned illustrator, Charlie Davis, they were animated to cohesively and beautifully represent these findings in a fashion that befits the highly progressive new Ghost.