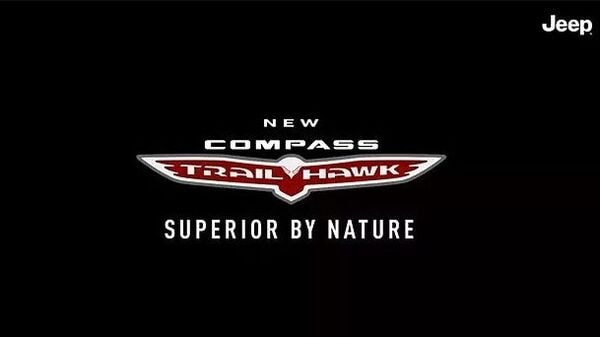 New Jeep Compass Trailhawk has been officially teased ahead of its launch in India. The ‘Trailhawk’ comes out as a more hardcore version of the updated Compass SUV which went on sale in the country in early 2021. The Jeep Compass Trailhawk will be launched as a 2022 model. As seen previously, it will come based on the top-spec variant of the SUV.

The more hardcore ‘Trailhawk’ will be distinguished by some notable cosmetic highlights including the tweaked headlamps and front main grille. In addition to that, the car will also get updated alloy wheels, remastered bumpers, and new graphics.

Inside, expect the new Trailhawk to get a 10.25-inch touchscreen infotainment system running on the latest Uconnect 5 system, there may also be an all-digital instrument cluster. Its key cabin features will also include a panoramic roof, ventilated front seats, wireless smartphone charging, dual-zone climate control, connected car tech, and more. Also, expect new interior colour options to refresh the cabin space of the Trailhawk variant.

Under the hood, the car is expected to get a 2.0-litre, turbocharged diesel engine along with a nine-speed automatic transmission and a four-wheel-drive setup. The overall output from this engine will stand at 165bhp and 350Nm. It will also boast Jeep’s SelecTerrain system to lend it an edge in terms of off-road drivability. Expect more details on the model to roll out in the days to come.

Meanwhile, Jeep India has recently announced that its upcoming - and much-talked-about - seven-seater SUV for the market here will be called Jeep Meridian. It will be an entirely ‘Made in India’ SUV but will come with the promise of offering a capable drive and a feature-packed cabin.