Last week, several images were reportedly leaked from China’s Ministry of Industry and Information Technology, showing the exterior design along with details of the wheelbase as well.
By : Sabyasachi Dasgupta
| Updated on: 22 Jun 2020, 07:52 PM 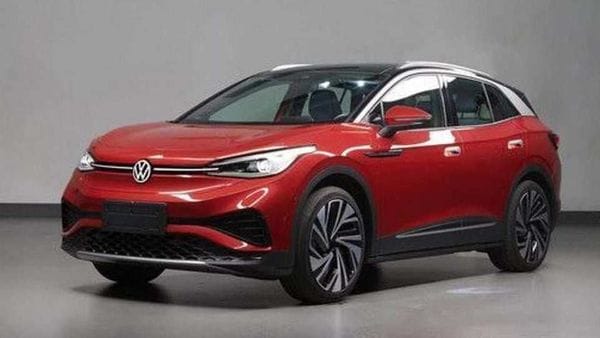 This new series of photographs show the variant with Chinese specifications . These leaked images give a cleaner look at the exterior design of the ID.4, though it carries the same characteristics as the one leaked a few days ago. In addition, this unit shows new design elements on the outside, such as the metallic ceiling trim.

Last week, several images were reportedly leaked from China’s Ministry of Industry and Information Technology by a forum run by Volkswagen fans online. The pictures showed the exterior design along with details of the wheelbase as well.

According to the latest leaks, the differences between the Chinese and the Europe spec models can be seen both on the front and the rear, in addition to having new wheels and new finishes for the side heels, without the usual chrome trim.

The design at the front also changes slightly. The grille is somewhat thicker and has an intermediate slat, while the bumper has very different air intakes. At the rear, new design elements like the tail gate that extends over the edge that marks the bumper. It now has new mouldings in the lower area.

The new electric SUV will be produced in two different versions - ID.4 Crozz and ID.4X. The pictures leaked earlier show that the two versions of the SUV will differ from each other in the form of LED head optics and rear lights (in both versions they are interconnected across the entire width of the stern), the design of both bumpers, and decorative elements of the exterior.

The wheelbase of the models will be similar to the ID.3 models - 2765 mm. The length of the ID.4 Crozz is 4592 mm, and ID.4X - 4612 mm. Judging by the information published on the website of the Chinese Ministry of Industry, the size of the wheels will be 19 inches, with 20-inch versions as optional.

When launched, the Volkswagen ID.4 is likely to take on rivals like Tesla Model Y. Volkswagen will be launching the ID.4 electric SUV in United States, China and some European countries like Germany.