Model Y generated quite a bit of buzz all through 2019 and well into 2020 because it is positioned as a premium offering targeting Ford Mustang Mach E.Tesla says range Model Y has a range of of 315 miles (506 kms) on a single charge and can seat seven adults with an optional third row.
By : Shubhodeep Chakravarty
| Updated on: 17 Mar 2020, 10:00 AM

After several reports that the company had begun preparations for the delivery of the first batch of its latest car - Model Y, Tesla has officially begun deliveries of its first mid-size SUV ever. The production had started in January at the company's plant in California, less than a year after Tesla had announced Model Y as its next big product. And while many suspected the coronavirus outbreak would have hit production lines, Tesla has managed to keep the threat off. To an extent. At least for now.

Model Y generated quite a bit of buzz all through 2019 and well into 2020 because it is positioned as a premium offering targeting Ford Mustang Mach E. The SUV has a claimed range of 315 miles (506 kms) on a single charge and can seat seven adults with an optional third row. It makes use of two independent motors and can propel itself from zero to 60 mph (96 kmph) in 3.5 seconds. With an advanced traction control system, Model Y is reportedly capable of tackling rain, snow, mud and off-road conditions with ease.

On the inside, Model Y features a 15-inch touchscreen display designed which, Tesla says, will be progressively upgraded through its OTA (Over The Air) set up. Reports suggest there is a Qi wireless phone charger inside - a first for Tesla where the feature comes fitted from the factory. Model 3 offers this too but it does not come as standard. 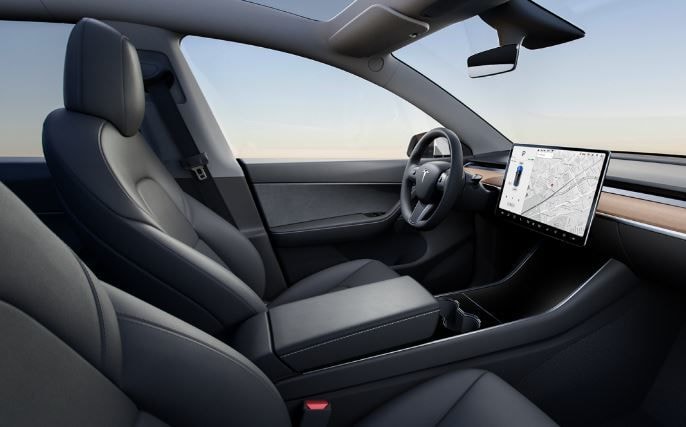 The interiors of Model Y from Tesla.

Although there is no clarity on the number of units it can ship and deliver on a month-on-month basis, estimates suggest production figure could be at 1,000 units each week. The purchase price stands at around $52,990.