The Model Y is a premium offerings from Tesla which will lock horns with the upcoming Ford Mustang Mach E.Model Y has a range of 315 miles (506 kms) on a single charge and can seat seven adults with an optional third row.
By : Shubhodeep Chakravarty
| Updated on: 02 Mar 2020, 09:45 AM 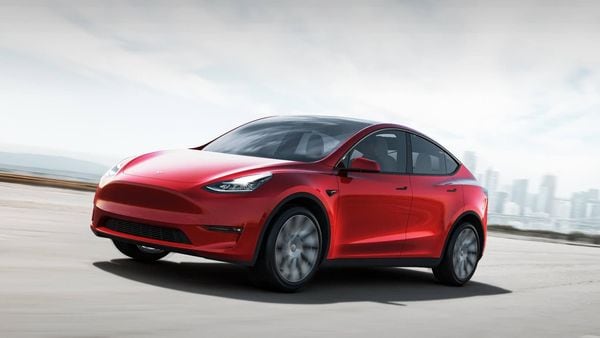 Tesla has reportedly started shipping its latest product - the Model Y - from its plant in California. The Model Y is a seven-seater SUV from the company which was first showcased in 2019. Deliveries were slated for second half of 2020 but have since been advanced due to several factors including Tesla's robust earnings which have helped it ramp up production.

A number of reports have suggested that there has been a massive buzz at the Tesla factory in Fremont (California) with transport trucks spotted with several Model Y being taken out. Electrek said that many more Model Y units were also spotted at the company's parking facility.

The Model Y is a premium offerings from Tesla which will lock horns with the upcoming Ford Mustang Mach E. The company claims it has a range of 315 miles (506 kms) on a single charge and can seat seven adults with an optional third row. The car makes use of two independent motors and can propel itself from zero to 60 mph (96 kmph) in 3.5 seconds. With an advanced traction control system, Model Y is reportedly capable of tackling rain, snow, mud and off-road conditions with ease.

Model Y is also billed as one of the safest cars from Tesla and features 360-degree rear, side and forward-facing cameras. It has a 160m forward-facing radar and 12 ultrasonic sensors to detect cars nearby and avoid potential collisions. It has a top speed of 145 mph (233 kmph) and sits on 19-inch wheels.

Tesla is reportedly gearing up to begin deliveries to customers from March 15. Although there is no clarity on the number of units it can ship and deliver on a month-on-month basis, estimates suggest production figure could be at 1,000 units each week.