The MG Hector Plus has some new-age features currently unheard in the segment, but is it enough to shake the dominance of the mighty Toyota Innova Crysta?
By : Prashant Singh
| Updated on: 13 Jul 2020, 06:29 PM 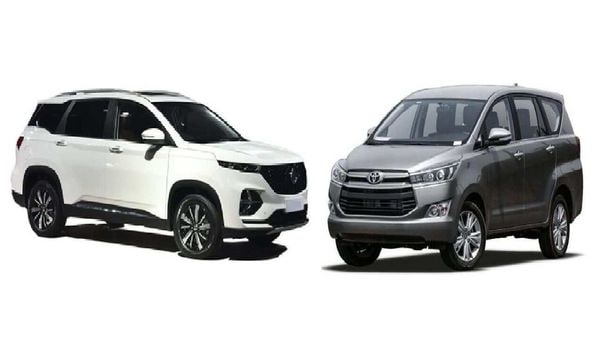 MG Motor India on Monday launched the new Hector Plus at ₹13.48 lakh. It is a 6-seat SUV which rubs shoulders with the Toyota Innova Crysta. The latter has been the undisputed king of the segment and still enjoys a huge demand among the premium MPV buyers.

Apart from different bodystyles, the core difference between both the cars is found in terms of the seating capacities. While the Hector Plus can only accommodate 6 people at once, the Innova Crysta has a seating capacity of 7/8 people.

The Hector Plus gets two engine options - 1.5-litre turbo-petrol which produces 143 PS/250 Nm and a 2.0-litre diesel engine which delivers 170 PS /350 Nm. Its transmission options include a six-speed manual unit and a DCT unit (petrol only).

Coming over to the Innova Crysta, it also gets two options in the form of a 2.7-litre petrol and a 2.4-litre diesel. While the former churns out 166 PS and 245 Nm, the latter delivers 150 PS and 360 Nm. Its transmission options include a five-speed MT and six-speed automatic unit.

(Also Read: MG customers can avail free sanitisation of their parents' cars of any brand)

In short, Innova is longer and taller than the Hector Plus, while the width of both the vehicles is similar. Both the models share the same wheelbase at 2,750 mm.