Hector Plus will be a rival to the likes of the upcoming Tata Gravitas, Toyota Innova and the seven-seat Hyundai Creta which is under development currently.
By : Prashant Singh
| Updated on: 05 Jul 2020, 06:24 PM 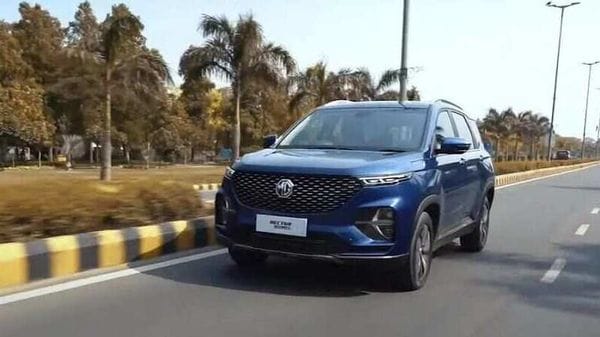 MG Hector Plus six-seat SUV will launch in the second week of July.

MG Motor India is gearing up to introduce its third product in the country (after Hector and ZS EV) in the form of Hector Plus. The SUV was first revealed at the Auto Expo 2020 and has now been officially teased in a video which brings forward some new details.

As seen in the teaser, the Hector Plus is bound to receive a six-seater configuration with captain seats in the second row. The SUV will also receive brown leather upholstery for a more up market feel. Later on, the company might also introduce the car in a seven-seat configuration.

On the inside, the longer Hector will also feature a revised dashboard with matching tan panels air vents for the third-row passengers, a 10.4-inch touchscreen unit with MG's connected car technology. The Hector Plus will be a connected car, just like regular Hector and will receive Over the Air (OTA) updates. The customers will be able to update software, themes, infotainment content and more, on the go.

In terms of mechanicals, the car will run on the familiar 2.0-litre diesel and 1.5-litre mild-hybrid petrol engines. The powertrain will come mated to a standard six-speed MT gearbox and dual-clutch automatic transmission (DCT). The latter will be optional on petrol model. MG Hector Plus feature captain seats in the middle-row.

The Hector Plus' launch is bound to take place in the second week this month (July). It will be a rival to the likes of the upcoming Tata Gravitas, Toyota Innova and the seven-seat Hyundai Creta which is under development currently.

(Also Read: MG ZS SUV 2020 gets facelift in the UK with fresh looks)

After the Hector Plus, MG Motor India's fourth product will be the Gloster SUV which will take on the likes of Toyota Fortuner and Ford Endeavour.