The new generation GLC is based on the same platform as the C-Class sedan. It is expected to offer a range of more than 100 kms in electric mode in the plug-in hybrid version.
By : HT Auto Desk
| Updated on: 17 May 2022, 09:09 AM 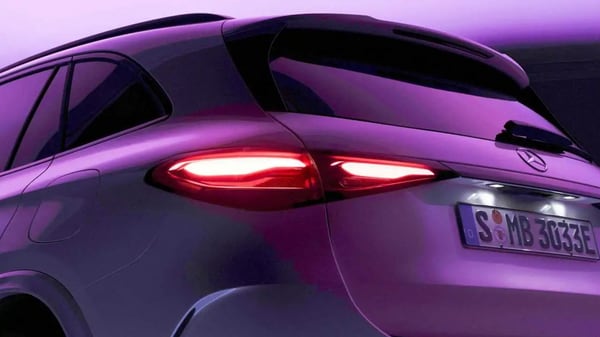 2023 Mercedes GLC is likely to come with mild-hybrid tech as well as plug-in hybrid options.

Mercedes-Benz is all set to take the covers off the 2023 GLC facelift SUV on June 1. The German carmaker has released a teaser image of the upcoming GLC ahead of the global debut. The new generation GLC SUV will come with several design updates and is expected to offer a range of more than 100 kms in electric mode in the plug-in hybrid version. The SUV will also get a mild-hybrid options as well.

The teaser image released by Mercedes shows the SUV's slim wraparound taillight cluster. The design seems to be inspired by the rear lights of the S-Class. The 2023 Mercedes GLC SUV appears to have an AMG-Line trim due to its small roof spoiler, the hint of a diffuser at the bottom of the image, and the vents on the lower bumper.

The new generation GLC is based on the same platform as the C-Class sedan. The German carmaker claims it will have customisable space, which hints at sliding rear seats. Like the S-Class and C-Class, the new GLC will feature the second generation of the MBUX (Mercedes-Benz User Experience) infotainment system on a 11.9-inch central display. The driver display, which will be borrowed from the C-Class, measures 12.3 inches.

All the engines of the new Mercedes GLC will be mild hybrid 48 volt or plug-in hybrid and will come mated to a 9-speed automatic gearbox. Under the hood, the new Mercedes GLC is likely to be offered with 1.5-litre 4-cylinder turbo petrol engines with an output ranging between 170 hp and 204 hp. There could be a more powerful 2.0-litre engine on offer with 258 hp, or the 2.0-litre turbo diesel with output ranging between 163 hp and 265 hp.

In addition, there should be a more powerful version branded AMG, which combines the 2.0-litre turbo 4-cylinder M139, which is currently used on the A45 S. This comes with an electric motor and generates maximum power of 503 hp. The four-wheel drive, 4Matic, will be standard on the new GLC and will have the complement of specific driving modes in Off Road