Mercedes GLC Coupe facelift: All you need to know

The AMG version of the GLC Coupe is likely to be replaced with 2.0-litre turbo petrol and 2.0-litre diesel engine options.Design updates on the outside are certain. The MBUX infotainment system will also make it debut in the car.
By : Shubhodeep Chakravarty
| Updated on: 26 Feb 2020, 09:57 AM 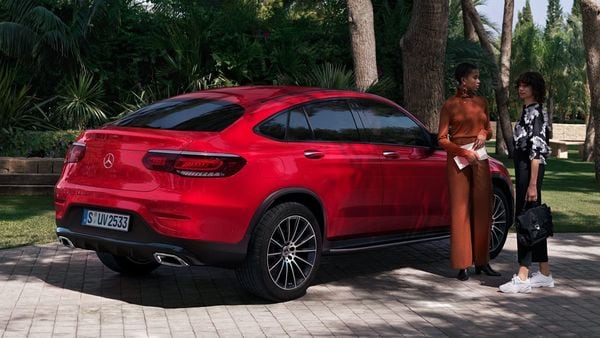 Mercedes is gearing up to launch the GLC Coupe facelift in India on March 3 minus the AMG version of the vehicle. The exterior and interior changes in the vehicle are likely to be similar to the changes already seen in the GLC which was launched in the country back in December of 2019.

The GLC Coupe facelift is next up and promises to find many takers once officially launched. The vehicle gets a diamond pattern grille, new LED head lights and tail lights, and reworked front and rear bumpers. The MBUX infotainment system which first made its way into the new GLC last December will be carried forward. Reports suggest that the cabin could also be even more plush.

The new vehicle is expected to come with 2.0-litre turbo petrol and 2.0-litre diesel engine options and while the power of AMG GLC43 4MATIC may be missed, the facelift GLC Coupe is likely to be quite capable in its own right. Transmission duties will be handled by a 9-speed automatic unit.

Once launched, the car will take on BMW X4 and Porsche Macan in India.