Mercedes claims that the GLE now brings the comfort of a sedan in a robust SUV package and gets a plethora of convenience and safety features.The GLE 400 d comes at ₹1.25 crore (ex showroom) and is a CBU while the 300d will be made at Mercedes' Chakan plant.
By : Shubhodeep Chakravarty
| Updated on: 29 Jan 2020, 04:18 PM 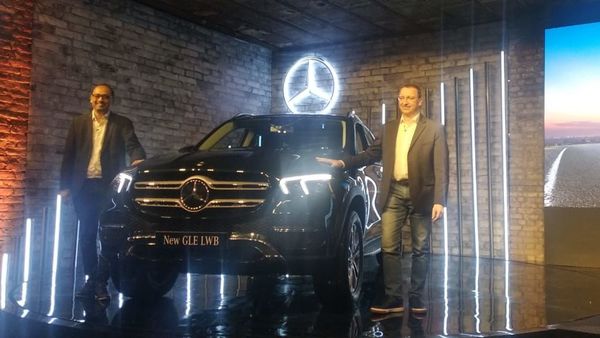 Mercedes-Benz on Wednesday launched the second-generation GLE at a starting price point of ₹73.70 lakh (ex showroom). The GLE has been a success story for the Germany giants in India and the company is banking on the 2020 edition of the car to once again deliver the strong punch.

In addition, Mercedes adds that its diesel engines are not just compatible with BS 6 norms but with Euro-6d as well. It claims its new SCR technology makes it possible for the diesel engines from the company to meet regulations comfortably.

In terms of looks and features, the GLE stays true to its SUV genes and gets multi-beam LED head lights which can light up roads 650 meters ahead, chrome-plated under guards at the front and rear, 825 litres of boot space, two power domes on the bonnet, panoramic sunroof which adjusts tilt according to vehicle speed, four-zone climate control, 13-speaker Burmester sound system, nine airbags (on 400d), seven airbags (on 300d), blind spot assist, climatised seats for cool or warm air as required (on 400d) and a 360-degree camera. The car stands on imposing 20-inch alloy wheels and the wheelbase has been stretched to allow for 69mm space extra leg space for rear passengers . The backrest can be reclined up to 30% at the rear. The parts of the new GLE are 95% recoverable and 85% recyclable.

Mercedes claims that the GLE now brings the comfort of a sedan in a robust SUV package and gets multifunction steering wheel wrapped in Nappa leather, intuitive Heads Up Display (HUD) which adjusts brightness according to external lights and position based on driver's height, ambient lighting with 64 colours with adjustable brightness and two grab handles around the center console. There is also the usual bells and whistles like wireless phone charger, MBUX infotainment system - first launched in GLC in December,

Mercedes says it has sold 13,000 units of the GLE so far and is confident of adding to that number with the 2020 model. The target audience, the company says, is successful professionals looking for an imposing ride that is robust as well as stylish - on and off the road.