A-Class Limousine from Mercedes-Benz is aimed straight at opening a new segment in the luxury space.Mercedes A-Class Limousine will be offered in two engine options and has a premium cabin and good drive dynamics.
By : Shubhodeep Chakravarty
| Updated on: 01 Mar 2021, 19:12 PM

Mercedes-Benz A-Class Limousine seeks to carve out a niche for itself in the entry-level luxury sedan segment. (HT Auto/Sabyasachi Dasgupta)

Mercedes-Benz A-Class Limousine is a relatively small car but one that has big and boisterous dreams of appealing to young achievers and those looking to enter the luxury automobile segment for the first time. With the CLA taken off the shelf, the A-Class will seem like it is a replacement but then again, it claims to be that and a lot more with Mercedes looking at creating a whole new segment with its latest that is lined up for an India launch.

The likes of the C, E and the S-Class are power-performers for Mercedes, across the world and even here in India. In fact, even with a growing preference towards SUVs, the German car maker sells more sedans in the Indian market than it sells SUVs. And with the A-Class Limousine, the car maker is looking at stamping its authority in the entry-level luxury car segment while promising to load up the product with all that one would expect from, well, a Mercedes.

To refer to the A-Class Limousine as a product is, however, best left to boring boardroom presentations. Here is a car that seeks to woo and wow its target audience with the promise of stylish looks on the outside, premium cabin within and decent drive dynamics. But does its promises hold weight?

I got an entire day with the Mercedes-Benz A-Class Limousine in sunny, sweltry Goa to figure if it is indeed hot enough to light up the entry-luxury segment and here are the key takeaways:

Mercedes designers seem to have opted to give the A-Class Limousine a rather understated visual profile from the outside which works to give it a mature expression even if a tad more flashy additions would have likely appealed to the younger audience the car hopes to attract. 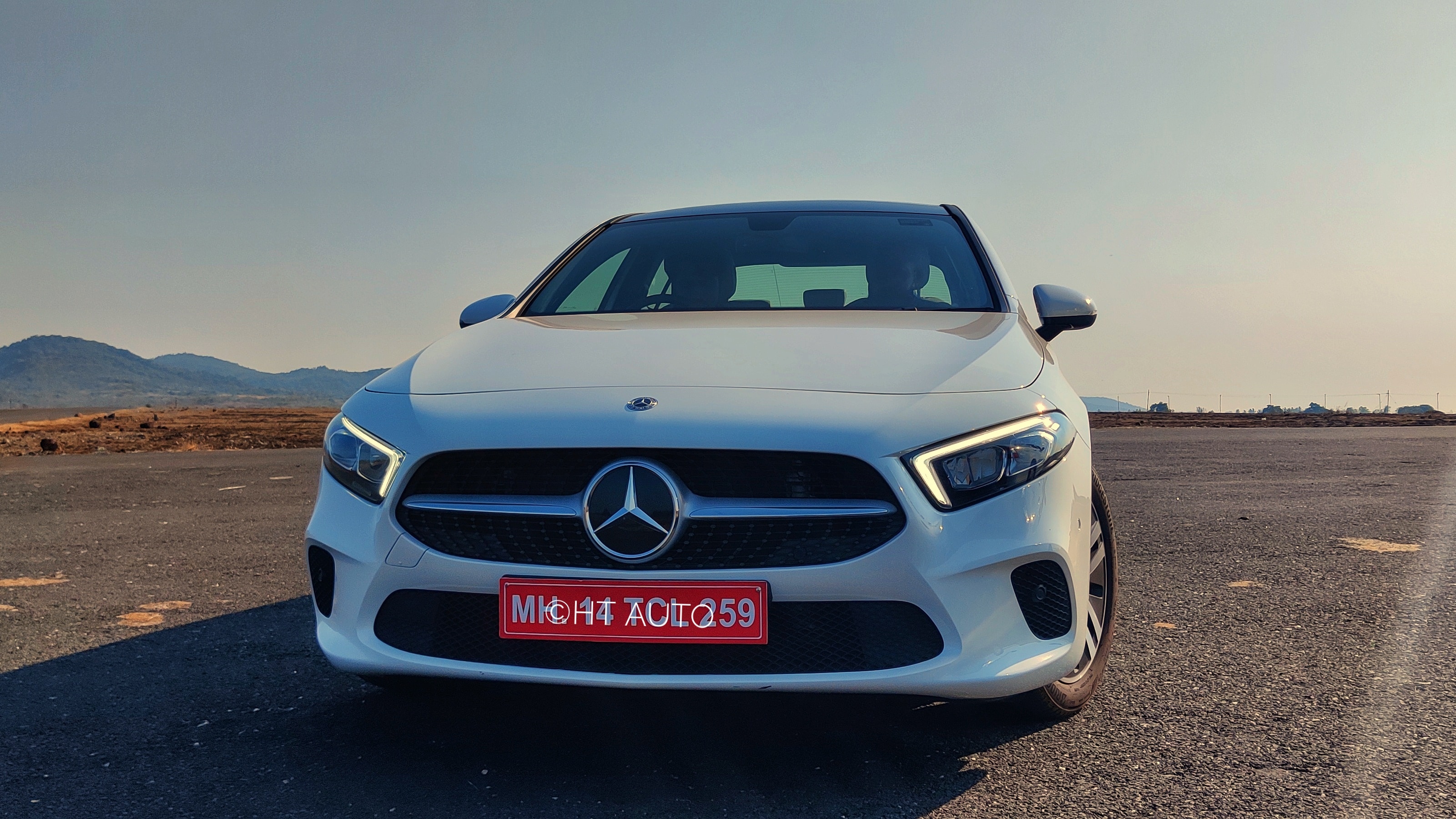 The A-Class Limousine has a smart face that isn't outright flashy but is still quite appealing. (HT Auto/Sabyasachi Dasgupta)

There's the slightest of resemblance to the CLA from the front as the bonnet stoops down to meet a strong front grille with its singular line converging to the Mercedes circle and the iconic tri-star. Interestingly, the tri-star gets a radar-based camera for measuring distance to the vehicle in front which would come under its safety highlights that are explained further down.

The tri-band LED headlights with integrated DRLs and the large air dams collaborate well to complete a sleek front face that isn't either overly sporty or overly muscular.

The side profile of the A-Class Limousine continues with the same theme of sticking to the solid basics of a sedan and the chrome outline all around the windows are the only glitz here. The roof-line flows smooth through and through which helps the car have a minimal drag co-efficient while the single character line on the bottom half of the doors on either side add the slightest of flairs. The five-spoke alloy wheels went well with the White test unit I had but I reckon they would go well with any of the other five colour options available - Mohave Silver, Grey, Black, Blue and Indium Silver.

The A-Class Limousine has a generous wheelbase but does it translate into generous legspace for rear-seat passengers? (HT Auto/Sabyasachi Dasgupta)

With a wheelbase of 2,729 mm and a relatively high ground clearance, the A-Class Limousine seeks to do justice to its name.

But while the front and side profile of the car manages to look striking without even trying, that gamble hasn't quite played off at the rear which looks just too plain. Now don't confuse plain with pauper. Just that take off that Mercedes logo and badge, and the A-Class could well appear like any other sedan from this or even any other segment. Not that there's much wrong with the LED tail lights and large rear window but a bit more attention to visual additions here could have worked better. 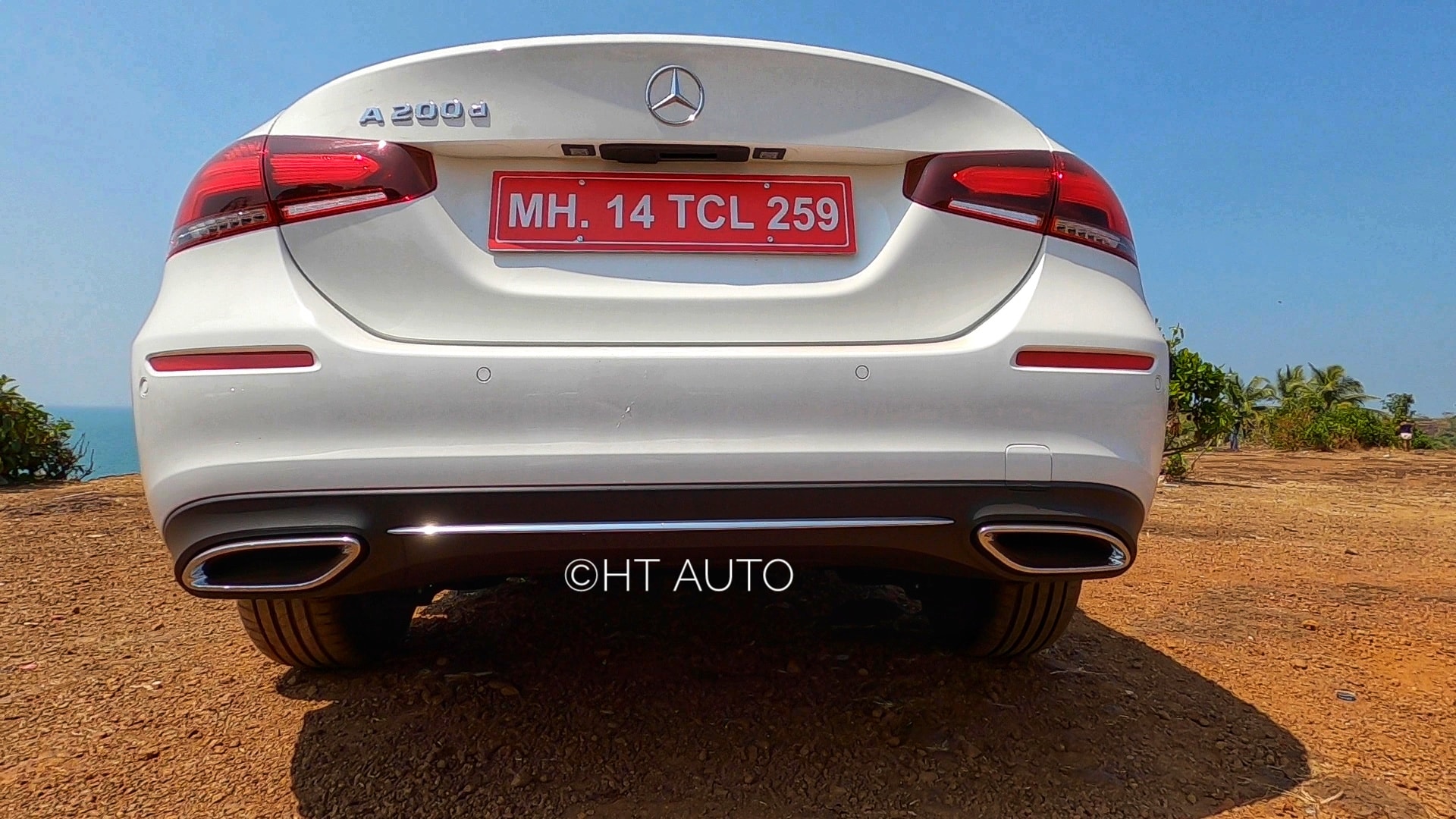 The exhaust vents in chrome are the only sporty edition to the visual profile of the A-Class Limousine from the rear. (HT Auto/Sabyasachi Dasgupta)

That said, looks are always subjective and there may be many who actually prefer their luxury cars this way too.

Step inside the A-Class Limousine and it is amply clear that here is where Mercedes chose to spend maximum time during the development phase. Well laid out, top-notch materials, a 10.25-inch infotainment screen blending without any barrier with another 10.25-inch driver display screen, turbine-like air vents with cabin ambient lights also present here - the A-Class Limousine is in all its true glory here. 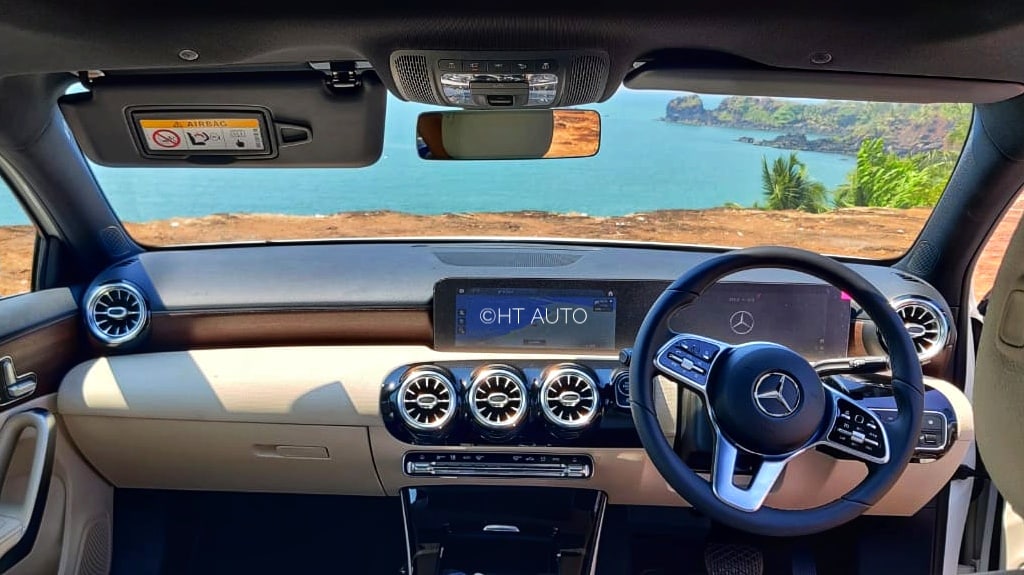 Whether you are a Mercedes veteran or a newbie looking for luxury delights, the cabin of this car promises a lot. The screens are bright, vivid, responsive and come with the latest MBUX system. Ambient lights run all around, the typical Mercedes center console stack complete with the trackpad, or even the walnut open pore trim on the dash and front doors, there's a dash of youthful appeal which collaborates well with the aesthetics that Mercedes almost always aces.

But while the front seats are nicely cushioned and are likely to be where most times are spent, space for the passengers at the rear isn't as much as I thought there would be. There's no magic engineering or design here that left me wondering 'how, just how did they do it.' Yes, this isn't an E-Class but because it is called a Limousine, I just went in assuming I would be amazed at the space on offer. Instead, the knee and leg room is only adequate and the under-thigh support isn't even that. The large and familiar hump on the floorbed means the middle passenger remains the stepchild. The window-line here is a tad too high which makes the windows appear smaller than they really are. The one-touch sunroof too doesn't stretch too far back up above. 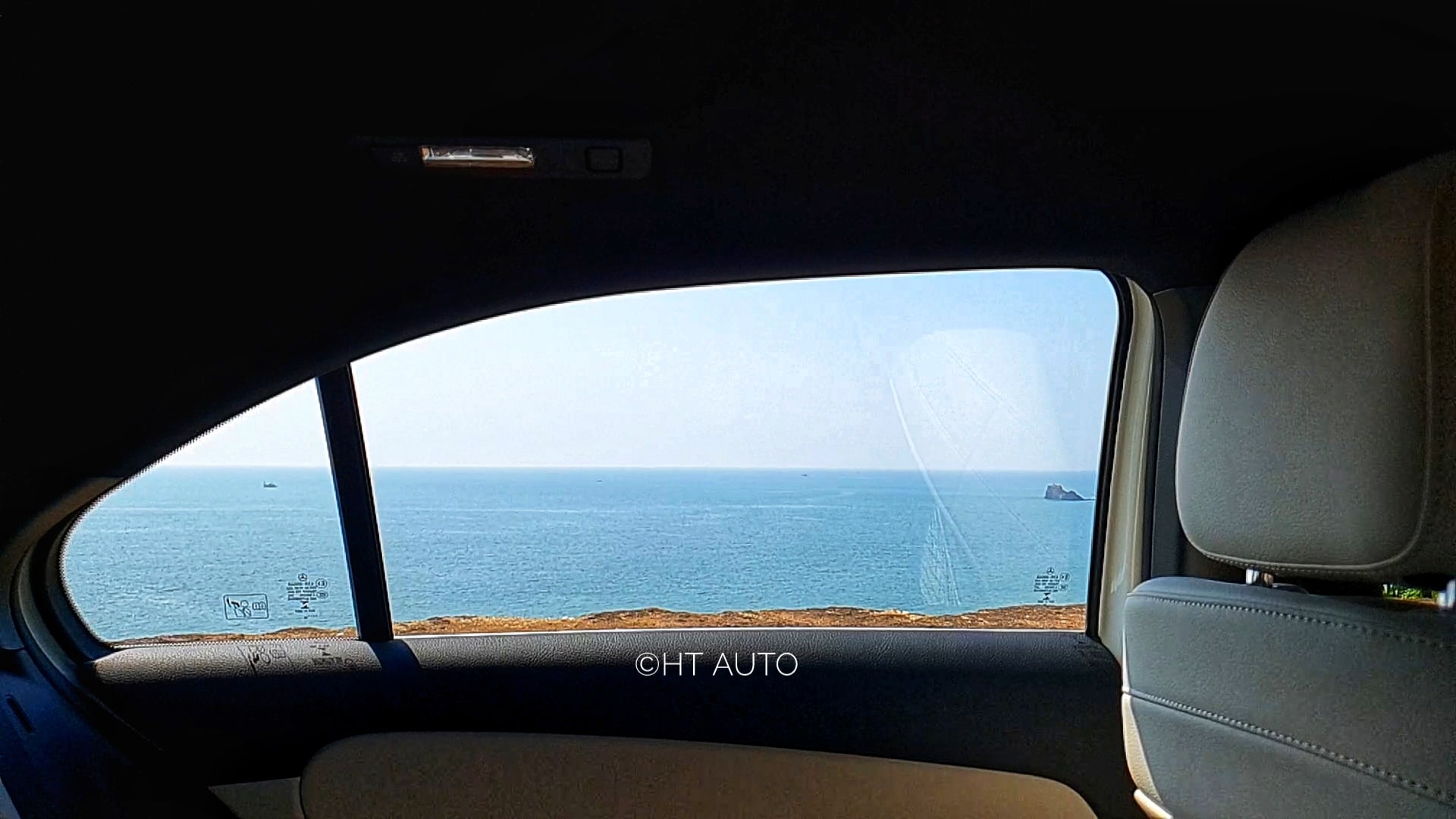 The rear side windows appear smaller from the cabin than they are from the outside. (HT Auto/Sabyasachi Dasgupta)

Headroom at 944 mm though is generous and would be fine for even those who are taller than average. The seat recline is done just right too. Further back, there's between 390 litres and 405 litres of bootspace on offer, depending on the powertrain one chooses.

If I were to buy the A-Class Limousine then, I would much prefer the command seats at the front which are positioned high for a commanding view of the surroundings and which have two-slot memory functions, and can obviously controlled electronically. Switch on the two-zone climate control, plonk the phone on the wireless-charging station and get set to drive out, I say.

At a time when many are choosing to ditch diesel engines, Mercedes is opting to persist. And that's a great decision because buyers should always be able to go one way or the other based on their specific requirements.

As such, while there's a 1.3-litre petrol motor available, the 2.0-litre diesel unit is what I got. And was glad for it.

The A-Class Limousine may not have a sporty bone in its drive character but is in no way sluggish either. It has a 'rolling through the motions' drive dynamic which would be par for the course on long and open highway roads while being tailor-made for city traffic conditions. I kept the test car in comfort mode for most parts and never really felt the need to either switch to Eco or Sport. But for the purpose of review, I did try out both and while the calm demeanour becomes more profound in the Eco mode, the Sport mode adds just a tad bit more zing. Want to make a quick overtake move? Sure. Want to win drag races? Not in this, please. The 2-litre diesel engine gets a move on with purpose even if it isn't the sportiest around. (HT Auto/Sabyasachi Dasgupta)

The 8G-DCT gearbox, however, deserves a place on the podium reserved all for itself. The gear shifts are precise and smooth whether the A-Class is munching miles at leisure or looking at getting a move on. A firm push on the throttle and it is 'Yes sir, right away sir' from this transmission unit.

The suspension set up is also done well to absorb most of the speedbreakers that the narrow lanes in South Goa are adorned with.

What did emerge as a hassle though was that after nearly an hour of driving my test unit of the A-Class Limousine, there were warning lights that began flashing periodically. The messages related to error with safety systems at first but eventually, the speed just froze to 45 kmph, the indicators worked only when they felt like and at one point the car won't even switch off.

The Mercedes support team was quick to reach the shoot location and eventually figured it could be a loose wiring that. A patchwork-like fix was done although at the time of handing the car back, most of the problems persisted.

While I do understand that such things are very much possible in pre-prod units, it does leave a rather unsavory taste.

The A-Class Limousine is perhaps more of an aspirational car than any of its elder siblings in the Mercedes garage for sedans. It promises to open up a new segment, one that may well be within reach of millennials in the country or those looking at their respective debut in the luxury segment. For customers like this, the A-Class is an attractive proposition and has decent looks, a plush cabin and a relatively reassuring drive trait.

For someone looking for a flashy option and/or one that has stronger drive dynamics though, the C-Class would still be the much better option assuming the budget allows for one.

Why Mercedes is driving in the A-Class is clear but it is up to the customer to decide whether it fits their respective and specific requirements.