McLaren teases P1 Spider by Lanzante at Goodwood, only five units will be built 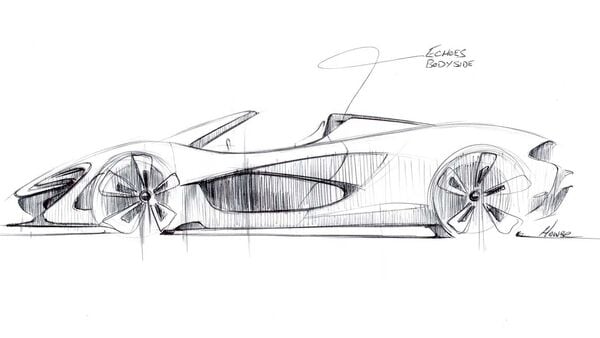 McLaren P1 Spider's first modified unit by Lazante will be delivered by end of this year.

British hypercar marquee McLaren discontinued its P1 Spider model seven years ago in December 2015, but now there is a new version teased at the Goodwood Festival of Speed. The revised open-top hypercar comes from Lanzante, a British automotive company specializing in the service and restoration of classic cars and also participates in motorsports events.

The manufacturer claims that this McLaren P1 Spider comes as a converted model based on an existing one. Also, only five units of the special model will be built. The car comes sporting extensive carbon fibre buttresses and incorporates newly developed air intakes. The aero-optimized buttress feeds air directly into the dual turbochargers. The manufacturer claims that this modification was necessary as the original hypercar had a roof scoop.

The modified version ditches the glass roof panels. However, it gets a removable roof cover. The front winds, doors and engine cover have been modified to ensure the flowing lines look as original as possible. The car's lower section has been modified to preserve its structural rigidity just like the standard car.

Not only the exterior but the cabin of the McLaren P1 Spider too has been updated.  It comes with reupholstered seats with different leather. Also, it comes with an element christened SuperFabric. This is claimed to resist weather and UV and protect the cabin from them. Also, the open-top hypercar comes with carbon fibre accents with a satin finish and glossy black switchgear.