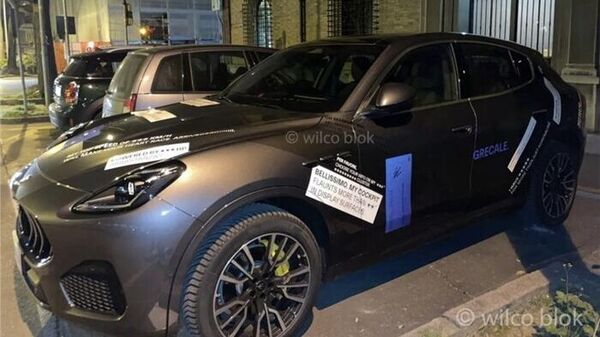 The Maserati Grecale comes with an aggressive stance. (Image: Instagram/wilcoblok)

Maserati Grecale is all set for global debut on March 22, and ahead of that, the luxury SUV has been spied in flesh. An Instagram post has emerged online showing the luxury SUV in a full production guise. Upon launch, the Maserati Grecale will compete with rivals such as Porsche Macan. Also, in the Maserati lineup, it will be positioned below the Levante SUV, which has seen pretty good success.

With Grecale, Maserati has continued its tradition of naming its cars after the famous winds. The Grecale has been named after the north-east wind of the Mediterranean Sea.

Speaking about its design, the Maserati Grecale comes with a styling language that has been significantly influenced by the Maserati Levante. The signature vertically slated aggressive-looking large grille, sharp headlamps with LED daytime running lights and overall front fascia bears influence from Levante. However, thee are distinctive styling elements as well. Inside the cabin, it gets a host of high-end features and luxurious elements.

The SUV will be available with a host of powertrain options including both internal combustion engines and electrified ones. It will use Maserati engines, instead of sourcing the power plants from Alfa Romeo. Expect it to get the 2.0-litre mild-hybrid turbocharged powertrain from Ghibli and Levante. Also, it could get the Nettuno V6 engine from MC20 as well.

Maserati Grecale is expected to play a key role in the Italian car marquee's product strategy. The SUV has been named Grecale after the fierce north-east wind of the Mediterranean Sea. The model forms a key part of Maserati’s bold revival plan that it unveiled in 2020, with the reveal of the MC20 supercar.

Maserati Grecale was first confirmed in 2018 and it is expected to hit showrooms sometime later this year. The SUV was originally slated for launch in 2021. However, the launch got delayed due to the semiconductor shortage, preventing the company from series production.