The list has been compiled based on the Global NCAP crash test ratings. Kia Carens is the latest three-row passenger vehicle to undergo the test.
By : Sabyasachi Dasgupta
| Updated on: 24 Jun 2022, 11:01 AM 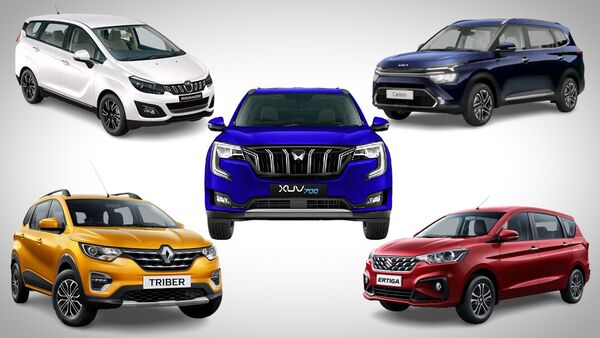 Kia Carens is the latest three-row vehicle manufactured in India to undergo the Global NCAP crash tests for safety ratings. The Carens, which Kia calls a Recreational Vehicle instead of Multipurpose vehicle like its rivals, has scored a three-star rating at the recent crash test. Kia Carens has joined the list of safest three-row cars on Indian roads along with the likes of Mahindra's XUV700, Marazzo, Renault Triber and Maruti Suzuki Ertiga MPVs. Here is a quick look at India's five safest three-row cars according to the Global NCAP crash test results.

Mahindra XUV700 is the safest three-row car one can buy in India currently. The SUV had scored five stars for adult occupant protection and four stars for child occupant protection at Global NCAP crash test in November, 2021. Recently, the three-row flagship SUV from Mahindra also won the Safer Choice title from the Global NCAP. The title is awarded to models that achieve high levels of safety performance and meet certain criteria including offering Electronic Stability Control (ESC).

Kia Carens three-row vehicle, which was launched earlier this year in February, had a disappointing crash test at Global NCAP. The Carens scored three-star safety rating for both adult and child occupant protection. The model tested had the most basic safety kits which included six airbags and Electronic Stability Control (ESC).

Carens managed to beat Maruti Suzuki Ertiga, one of its rivals in the segment, by a thin margin. The three-row MPV from Maruti underwent the Global NCAP tests in 2019, when it returned with a three-star rating. However, as far as safety points are concerned, the Ertiga is marginally lower than that of Kia Carens.

Among other notable three-row vehicles in India are Mahindra's Bolero and Scorpio, Toyota's Fortuner and Innova Crysta and Jeep Meridian. While the old generation Scorpio did not pass the Global NCAP crash tests, the upcoming model is expected to be safer than the previous generation models. The Fortuner did not undergo Global NCAP test, but scored five-star ratings at the ASEAN NCAP crash test just like its sibling Innova Crysta. Jeep has not put Meridian under any crash tests so far.

It is important to note that some of the other three-row vehicles in India have not undergone the Global NCAP crash tests yet. Cars like Maruti Suzuki XL6, Tata Safari, MG Hector Plus have not been considered in this list since they are yet to go through such tests.