Mahindra Scorpio-N gets one lakh bookings in just half hour

Mahindra Scorpio-N is looking to replicate the success that fellow SUV models like XUV700 and Thar have had in the Indian car market.
By : Shubhodeep Chakravarty
| Updated on: 30 Jul 2022, 14:41 PM 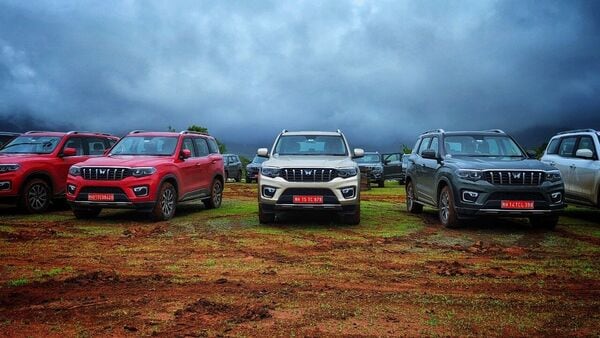 The Mahindra Scorpio-N is offered in seven body colour options.

Mahindra Scorpio-N flew of the proverbial shelves on Saturday morning once the company opened online bookings for the latest SUV to join the list of Mahindra models on offer. To be sold alongside the existing Scorpio, the first batch of around 20,000 Scorpio-N units received one lakh bookings in the first half hour since reservation window was opened this morning. The first 25,000 bookings, which will be eligible for the introductory prices, were done within a minute after the booking process began.

Mahindra has had enormous success with its recent SUVs with the likes of the updated Thar and the new XUV700 getting a massively overwhelming response from the market. This, however, has also led to prolonged waiting periods. But company officials told HT Auto previously that lessons have been learnt and while demand is great, to cater to it is crucial. As such, Mahindra has been clear with its strategy for Scorpio-N. Around 20,000 units were put up as part of the initial rollout stage and deliveries would be done on a first-come-first-serve basis, depending on factors like time of booking made, variant selected, fuel type etc. The Z8L variant of the SUV will get priority during delivery. The company also outlined that deliveries would start from September 26 and be carried out till the end of December.

Interestingly, bookings for Mahindra Scorpio-N would continue to be accepted but those who now make a reservation would only get a delivery timeline sometime in 2023.

Mahindra Scorpio-N is offered in multiple engine and transmission choices spread across five broad variants - Z2, Z4, Z6, Z8 and Z8L. The company said that based on customer enquires for it, production of Z8L has been given priority. Mahindra Scorpio-N engine and transmission: The Scorpio-N is offered with a 2.2-litre diesel engine and a 2.0-litre petrol engine. The petrol engine produces 203 PS and 370/380 Nm of peak torque. The diesel engine produces 175 PS and 370/400 Nm of peak torque. The torque output depends whether the customer opts for a 6-speed manual gearbox or a 6-speed torque converter automatic transmission. The Z2 and Z4 gets a lower state of tune with the diesel engine. It produces 130 PS and 300 Nm. These two variants comes mated to only a manual gearbox.

All the powertrains are rear-wheel drive and you can get the four-wheel drive with the diesel engine. Moreover, the diesel engine also gets three drive mode. Mahindra Scorpio-N exterior highlights: The exterior of the Scorpio-N looks butch and the SUV has a strong road presence. There are dual barrel LED headlamps with sequential turn indicators, LED fog lamps with Daytime Running Lamps, 17 or 18-inch diamond-cut alloy wheels and vertically stacked LED tail lamps. Mahindra Scorpio-N cabin and feature highlights: The cabin of the Scorpio-N is a massive improvement over the Scorpio Classic. It is now finished in a dual-tone theme of Coffee brown and black. There is an electric sunroof, push button to start/stop the engine, automatic headlamps and wipers, electric adjustment for the driver seat, dual-zone climate control, rear AC vents among others. The touchscreen infotainment system is powered by the manufacturer's new AdrenoX system. It does supports Android Auto, Apple CarPlay and comes connected to a Sony sound system. Mahindra will also offer the Scorpio-N with captain seats. Mahindra Scorpio-N rivals: The key rivals of the Scorpio-N are Tata Safari, Harrier, Hyundai Alcazar, Creta, Kia Seltos and the MG Hector Twins.