‘Made in India’ Jeep Wrangler gets costlier, price hike of over ₹one lakh

Jeep had launched the locally assembled Wrangler SUV at a starting price of ₹53.90 lakh (ex-showroom). The price hike, which comes within six months of the launch, is more than a lakh.
By : HT Auto Desk
| Written By : Sabyasachi Dasgupta
| Updated on: 11 Oct 2021, 03:29 PM 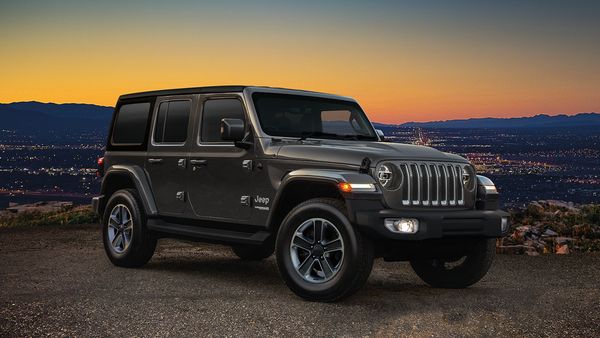 Jeep has hiked the prices of locally assembled Wrangler SUVs in India.

Jeep has increased the prices of its Wrangler model in India within six months of launching the SUV range locally assembled in the country. Jeep has officially updated the price list on its website, showing the Wrangler SUV now available at a price of ₹55.15 lakh, which is more than ₹one lakh expensive than what it cost a few days ago.

Jeep had launched the locally assembled Wrangler SUV at a starting price of ₹53.90 lakh (ex-showroom). The launch price of the iconic off-road SUV had dropped by almost ₹10 lakh compared to the models brought through CBU route, thanks to local assembly.

Jeep offers Wrangler in India in two trims, including the Wrangler Unlimited and Wrangler Rubicon. In the latest hike, price of the Unlimited variant stands at ₹55.15 lakh, expensive by ₹1.25 lakh. The Rubicon variant will now cost ₹59.15 lakh, almost a similar amount of hike.

Wrangler is Jeep's first model that has been approved for locally assembly. Wrangler SUV is currently being manufactured at the Fiat Chrysler plant in Ranjangaon, Pune.

The Jeep Wrangler is powered by a 2.0-litre turbo petrol which is capable of producing a maximum output of 262 hp and 400 Nm of peak torque. The engine comes mates to an 8-speed automatic gearbox.

The Made in India version of the Jeep Wrangler is a direct rival to the likes of Land Rover Defender and the Mercedes-Benz G 350d.