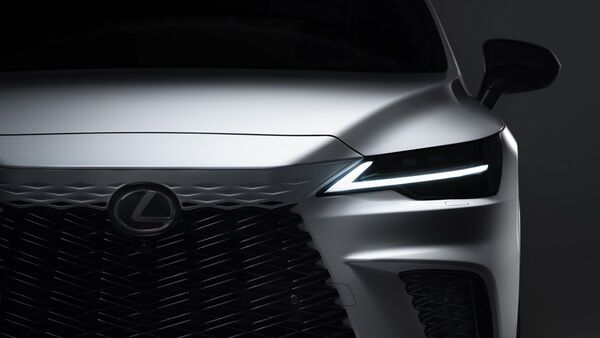 The new Lexus RX's front fascia looks sharper than before.

Toyota owned Japanese luxury car brand Lexus has teased the new generation RX SUV ahead of its scheduled debut on June 1. The automaker has confirmed the world premiere of the luxury SUV and said that it has undergone a complete renewal. The teaser image partially reveals the front fascia of the upcoming SUV.

It is clear that the 2022 Lexus RX will come incorporating the automaker's latest design philosophy. The nose section appears revised and more sculpted than the outgoing model. Also, it appears similar to the smaller sibling Lexus NX. However, the spindle grille features a fresh look, similar to what other Lexus cars have. The car also gets sharper LED headlamps than before and the bumper intakes too have become larger for a sportier appearance.

The teaser image doesn't reveal the side or rear profile of the new generation Lexus RX. However, expect the side and rear profile too to come incorporating a host of updates just like the front fascia.

Inside the cabin as well, there would a host of updates. The Lexus RX SUV is expected to get the automaker's new infotainment system with a 12.3-inch touchscreen display with a wide range of connectivity features. This could be similar to what is available in the Lexus NX and in the recently updated UX as well. Expect the upcoming luxury SUV to receive Lexus Safety System+ 2.5 ADAS suite as standard in all variants, in line with the automaker’s strategy. The safety suite is a bundle of several tech-driven safety features.

Lexus is yet to disclose any information about the powertrain of the SUV. However, expect it to come with a hybrid powertrain like its predecessors. Also, expect more power and efficiency from the powertrain of the new RX. The current generation Lexus RX made its debut in 2015. It received a facelift in 2019. This is going to be a major update since then.