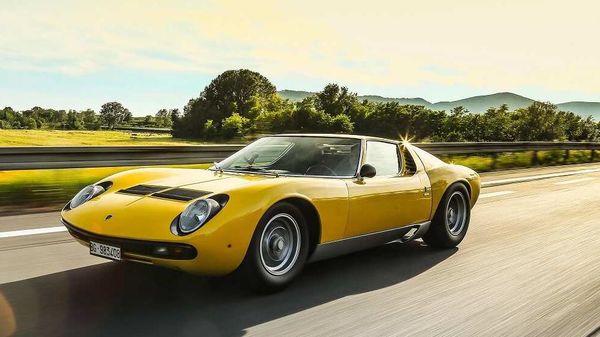 Lamborghini Miura SV had the capability to cover one kilometer from standstill position in just under 24 seconds.

Italian supercar manufacturer Lamborghini's Miura SV, which was officially unveiled in March 1971 at the Geneva Motor Show, has completed 50 years in 2021. As Lamborghini claims, the Miura SV is one of the most sought after production car built by the Italian brand and it is the last evolution of the P400 project. The Miura SV was showcased to the world alongside the Countach LP 500 concept.

The Miura SV was very much distinctive compared to the other Miura models such as P400 and P400 S, both in terms of style and technical specifications. at exterior, the car had wider rear fenders, differently designed tail-lights, and a front bonnet characterized by a new air intake for the radiator.

Inside the cabin, the car had a modern look compared to the previous versions, thanks to the greater use of leather upholstery and the presence of chromed details.

As Lamborghini says, despite continuing with the same silhouette, the Miura SV was powered by a 4.0-litre 12 cylinder transversely mounted rear-mid engine, capable of churning out 385 hp of power at 7,850 rpm and 400 Nm of torque as well.

The Miura SV's official top speed was more than 290 kmph, and it had the capability to cover one kilometer from standstill position in just under 24 seconds.

The automaker also claims that there was a separate lubrication system between the engine and gearbox that was introduced when the SV was already in production, adding a hugely important technical improvement.

The Lamborghini Miura SV had different sized tyres for front and rear. The rear wheels were increased from 7 to 9 inches and equipped with 255-section tyres. Also, there was a different rim design.