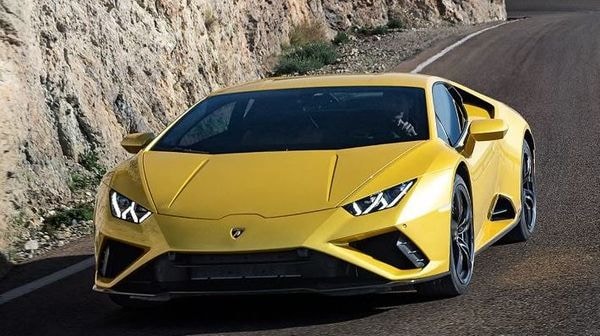 While being a Lamborghini meant that the Huracan EVO RWD was always going to command an ultra premium price, the supercar brings a lot to the road to help it stay ahead of the pack. A 5.2-litre V10 engine forms the core of the supercar which has a peak power performance of a hair-raising 610 Ps and peak torque of 560 Nm. A seven-speed dual clutch transmission is responsible for managing all of that power to help the 305-section rear tyres propel the Huracan EVO RWD forward.

The supercar, quite obviously, is a massive head-turner and features a new splitter, vertical fins and new diffusers. Not much has been changed here when compared to the AWD version of the vehicle.

On the inside, the Huracan EVO RWD gets a new 8.4-inch diagonal infotainment screen and also boasts of internet connectivity, AppleCarPlay and telemetry.

The infotainment screen inside the Lamborghini Huracan EVO RWD.

Equipped with Starda and Cords modes, the Huracan EVO RWD is a capable performer on regular roads as well as blazing quick when testing times on the race track. Its P-TCS system helps with improve the handling which makes the Huracan EVO RWD negotiate corners at high speeds with considerable ease, says Lamborghini. There is also a Sports mode which, actually, is where the supercar is at its best.

Looking to take a direct aim at the Porsche 911 and Ferrari 812 Superfast, the Huracan EVO RWD allows Lamborghini to not just show off its renowned capabilities once again but to confirm that India is as important a market as any other.