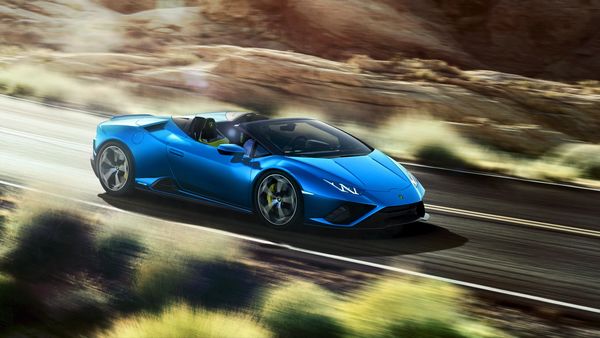 Lamborghini will launch the Huracan Evo RWD Spyder in India on June 8.

Lamborghini will launch the Huracan Evo Rear-Wheel-Drive (RWD) Spyder in India on June 8. The launch comes about a year after the Italian sports car manufacturer drove in the Huracan Evo RWD Coupe at a price of ₹3.22 crore.

The new Huracan Evo RWD Spyder made its global debut almost a year ago. It's the latest member in the range of Evo Coupe, Evo Spyder and the Evo RWD Coupe cars. One of the key highlights of the car is the electric-folding fabric roof which can be lowered within 17 seconds and works even at a speed of 50 kmph. The rear windscreen of the Huracan Evo RWD Spyder can also be lowered separately, irrespective of the position of the roof.

The Huracan Evo RWD Spyder that is available globally, is powered by the same 5.2-litre, naturally aspirated V10 engine that is used in its Coupe version. It is capable of churning out a massive 610 PS of power and 560 Nm of peak torque. The engine is teamed-up to a 7-speed dual-clutch automatic gearbox.

All the engine specifics points to an ultra powerful car, quite like any other Lamborghini vehicles. The power boils down to a performance that is comparable to most of the hard-top cars the carmakers has in its stable. With a top speed of more than 320 kmph, the Huracan Evo RWD Spyder can cover zero to 100 kmph in just 3.5 seconds.

As far as the design of the car is concerned, the Huracan Evo RWD Spyder is a lot similar compared to the Coupe version, though it is about 120 kgs heavier than the hard-top model because of the drop-top roof mechanism. Besides this, the Spyder also has a reworked front splitter and rear bumper with a new rear diffuser as well.

The Spyder sold across the world gets the same cabin as the Huracan EVO RWD Coupe. There is an 8.4-inch touchscreen that comes mounted on the centre console. The system comes kitted with standard Apple CarPlay connectivity but misses out on Android Auto. It also features the Amazon Alexa voice recognition function. The system is used to control the infotainment and driver assistance functions.

The Lamborghini Huracan EVO RWD Spyder was launched in the global markets at a price of 229,428 dollars, which is roughly converted to ₹1.67 crore. However, since Lamborghini will almost certainly bring this car to India through the CBU (completely-built unit) route, the price of the car is likely to be in excess of ₹3 crore.