Mercedes EQT is a battery-powered small van that could be ideal for small families.The concept EQT from Mercedes will be shown on May 10. There is no affirmative launch timelines yet.
By : HT Auto Desk
| Updated on: 21 Apr 2021, 10:00 AM 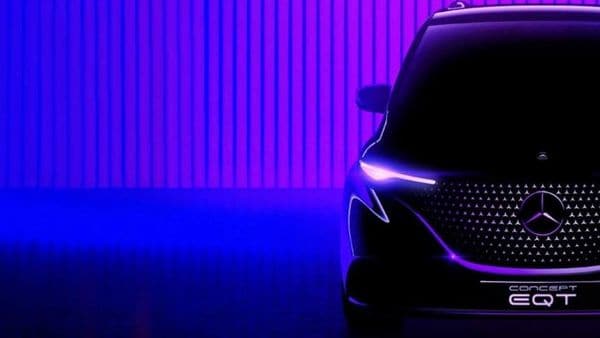 Mercedes has shared this teaser image of its EQT electric small van.

Mercedes-Benz is having a mighty charged-up April. And literally at that. The company recently showcased its EQS flagship sedan in a glitzy digital event and followed it up by introducing the EQB SUV. Even as both electric vehicles continue to gather a whole lot of attention, the Germany car maker has already moved to its next big highlight - the EQT family van. Although in concept form, the EQT has already been teased and will make its debut for the world on May 10.

Mercedes is in the fast lane of developing and introducing all electric models and a number of its products are already on roads the world over. Determined to close the gap with Tesla and keep pace with or leave behind others like Volkswagen, Ford and Volvo, it is looking at offering EV options across segments and a family van powered by battery could well be the next area of interest. And so, welcome the EQT.

The EQT - part of the new T-Class family, has been spotted on test runs in Europe on several occasions and is basically a small van that could cater to the needs of a family and may be a viable option for city runs or highway duties. There are reports that there could be a commercial version of the small van as well but it is likely to be vastly different from the EQT.

Mercedes recently also released a teaser image of the EQT in concept form and many believe the vehicle showcased on May 10 is likely to give a much clearer picture of what the production version of the EV may be all about.

Not much is known in terms of battery capability and feature list but the EQT could be targeted at a niche EV-buying audience. While the T-Class is expected to be launched sometime early next year, there are no timelines yet for EQT although reports suggest that the production version may be showcased late 2021.