Hyundai i20 2020 launched: Detailed first look at all that's new

Hyundai i20 2020 has been officially launched in India at ₹6.79 lakh.The new i20 from Hyundai offers a mile-long list of changes, updates and upgrades - from how it looks to the engine options, transmission, features and space.
By : Shubhodeep Chakravarty
| Updated on: 06 Nov 2020, 11:00 AM

The all-new i20 from Hyundai seeks to be a strong and viable option in the premium hatchback segment once again.

Hyundai i20 2020 has been officially launched in India at a starting price of ₹6.79 lakh (ex showroom, pan India, introductory). It is one of the biggest launches of the year - both for Hyundai and for the Indian automotive industry, because of the popularity that premium hatchbacks are seeing once again and because of the mile-long list of updates and upgrades on this particular model.

(Also read: i20 vs Altroz vs Baleno - price structures compared)

From looks to engine options and transmission to the plethora of features incorporated to refresh the challenge that the car seeks to mount once again after first being launched here back in 2008, the i20 is seeking to dominate its segment with maximum authority.

I got a chance a few weeks back to experience all that the new i20 has on offer but had to wait till the official launch to put out the details. And it was quite a wait because there were quite a few impressive details to highlight. And while how the i20 performs out on roads will come up shortly on HT Auto, here's our first take on the updated hatchback that challenges the likes of Altroz from Tata Motors, Maruti Suzuki Baleno and Toyota Glanza.

Hyundai's 'Sensuous Sportiness' has been the design philosophy that has underpinned how several of its newer cars look from the outside. And while the new i20 is every bit sporty to look at, there is an inherent style that is amply evident at first and every subsequent glances.

The new front grille - Hyundai describes it as Parametric Jewel pattern grille - looks absolute fresh and classy on the car and is flanked on either side by catchy LED head lamps which come with the i20 branding. Sitting under these are the projector fog lamps in a D-shaped casing which adds to the visual and practical appeal. 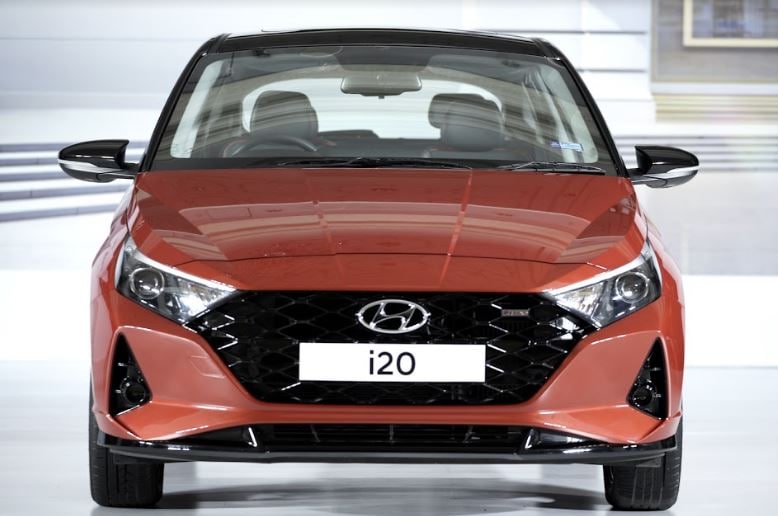 Hyundai i20 gets a plethora of styling updates on the outside and looks far sharper and stylish than ever before.

The car put up on display by Hyundai was a Turbo variant and therefore the red and black colour theme accentuated the rather athletic front fascia even more. Straight flowing character lines on the bonnet give the car a definition and these fall sweeping in towards the grille, without actually ever meeting.

(Click here for all the pics of the new Hyundai i20) 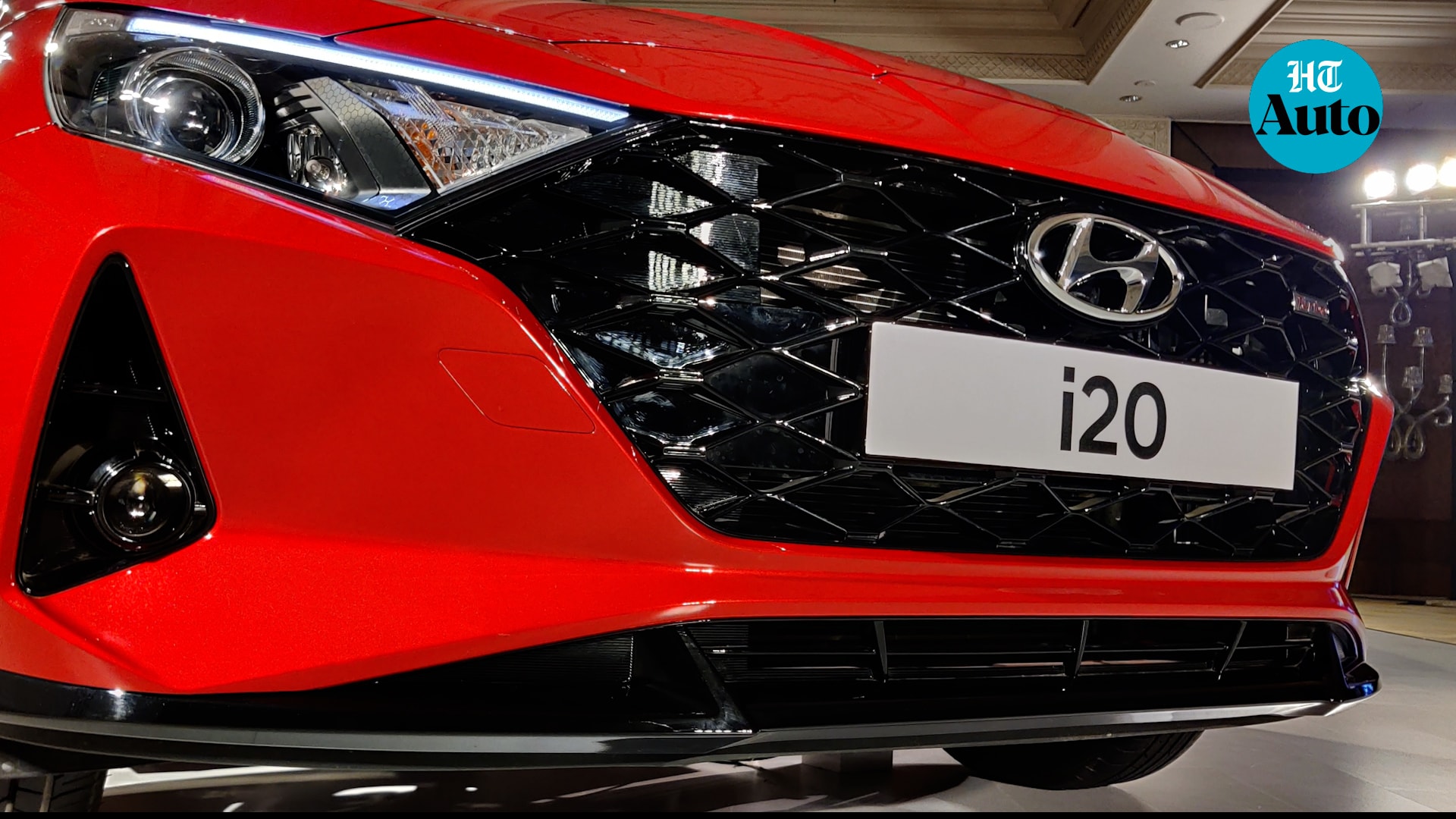 An all-new front grille with LED head lights flanking it give Hyundai i20 2020 a sporty appeal.

Tippy-toe over to the side and the same sense of style, with ample of doses of sporty character and athletic appeal continue. The highlights here are the R16 diamond-cut alloys - almost similar to the one found in Verna 2020, chrome door handles, Fly back chrome beltline design, large quarter-back glass on the C-pillar and a blackened side sill garnish with another i20 brand badge here. 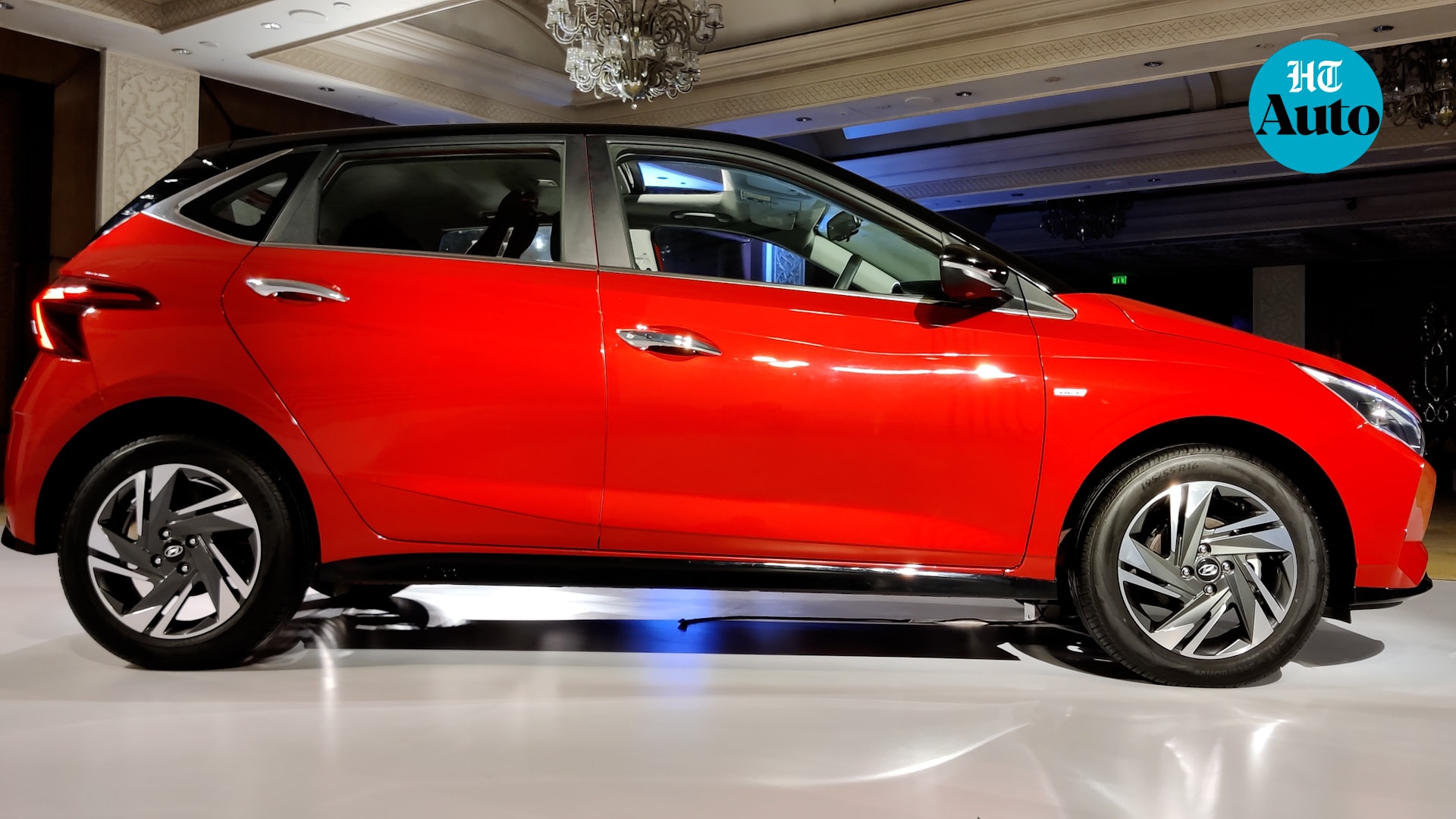 The i20 2020 from Hyundai gets chrome additions to tastefully increase its visual appeal.

The rear is, perhaps, where the most noticeable design changes are at. This could be because of how radical the all-new Z-shaped tail light here appear - especially when lit, and a chrome belt line that connects the two units on either side. A reflector on top and two on either side at the bottom, just above the blackened plate compliment and complete the profile. The Z-shaped tail lights on the new i20 give it a contemporary look. 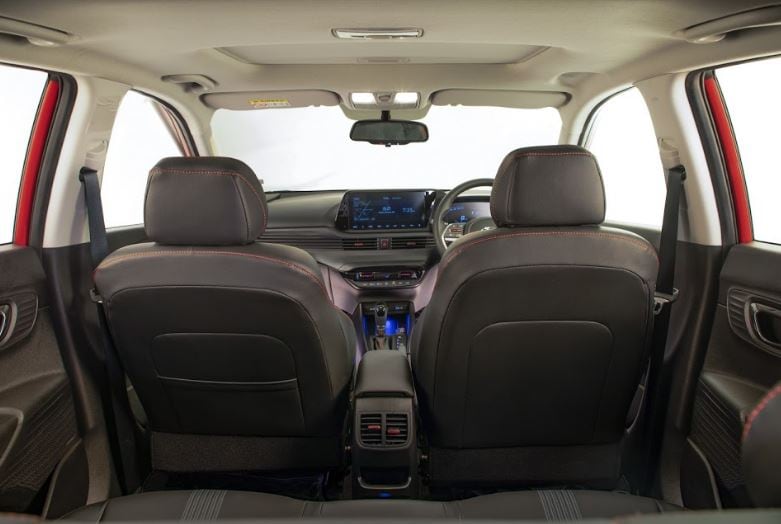 The cabin of the new i20 from Hyundai emphasizes on space and comfort as much as it seems to do on storage and convenience.

Extra time seems to have been spent on ensuring that the cabin layout of the new i20 isn't just functional and doesn't just prioritize features - which it does - but has a clear emphasis on spaciousness. 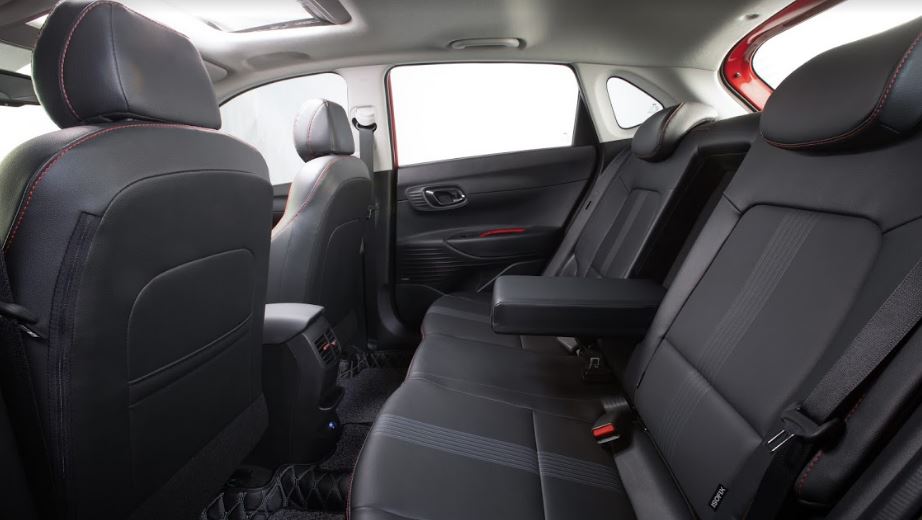 The leg room for rear passenger has been increased compared to the Elite i20.

This is clear from the numbers as well as from the feel of being inside the car.

The slight increase in width and wheelbase may be marginal but the increase in the space quotient on the inside - especially in the rear - is absolutely evident. The leg room for back-seat passengers has gone up with decent levels of knee room, head room as well as under-thigh support. The windows are adequately sized while a one-touch electric sunroof makes its debut in the i20 as well.

But the sunroof is hardly the only feature highlight here. 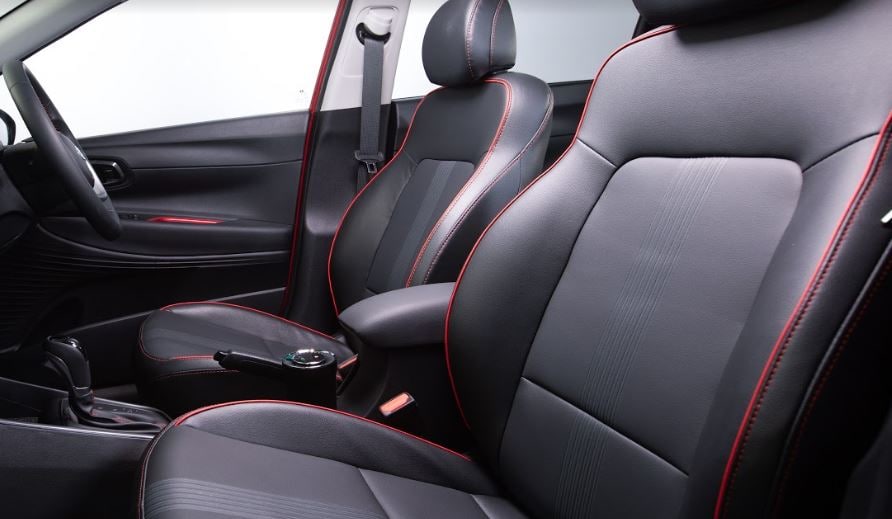 The red stitches and cladding on the upholster is specific to the Turbo variant of i20 2020.

The new i20 gets an industry-first Oxyboost Air Purifier with air quality display, a large 10.25-inch HD touchscreen infotainment with navigation, Bose 7-speaker sound system, blue-coloured ambient light theme, wireless phone charging with cooling pad and a large digital cluster with TFT Multi-information display. Hyundai's BlueLink technology also makes its way into the i20 for the first time ever. 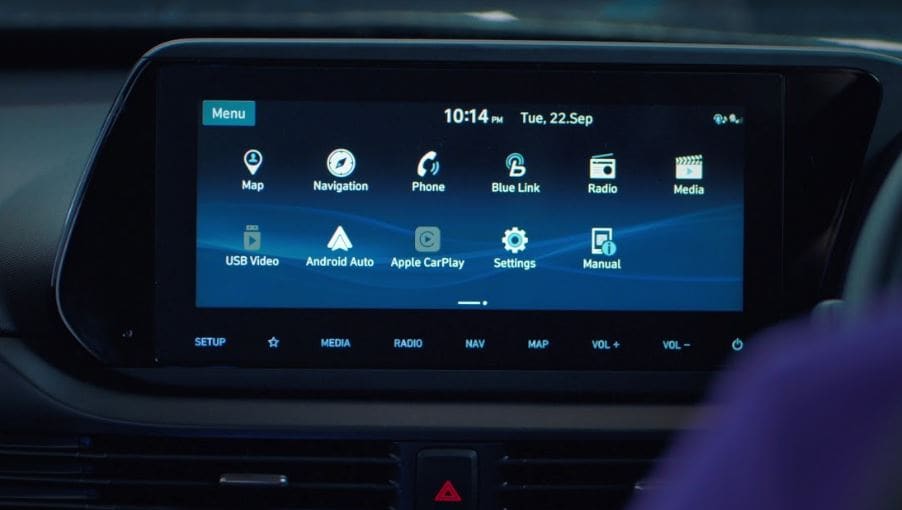 The 10.25-inch main infotainment unit is responsive and is vibrant for quick access.

The cabin itself is well appointed with an emphasis on horizontal geomertrics, especially evident when looking at the dashboard. Several USB and 12V charging points, storage spaces and a rear-AC vent unit further compliment the comfort and convenience here while over 300 litres of boot space means packing up in a miserly way may be quite unnecessary.

Hyundai i20 2020 will now get a 1.0-litre Turbo petrol and, frankly, that is hardly a surprise considering the popularity this engine has seen in other products offered by the company. This engine option will come mated to a DCT or iMT gearbox. 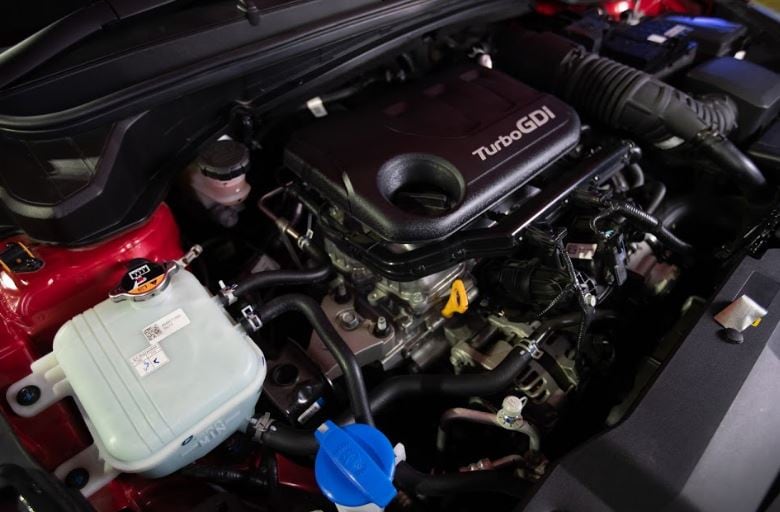 The Turbo petrol engine option is likely to find many takers among those who opt for the new i20 from Hyundai.

Then there 1.2-litre Kappa petrol engine mated to either IVT or a five-speed manual transmission unit, and a 1.5-litre diesel engine with a six-speed manual gearbox.

Hyundai also emphasizes that it has paid attention to the safety aspect more than ever before and therefore, the new i20 makes use of 66% high-strength steel which improves its crash-worthiness. (Read more here)

On paper, rather on stage, the new i20 appears to be a solid package. It grabs on to its strengths and adds muscle by vastly updating its looks, adding features and offering a number of engine and transmission options. That there is more space is also a boon. It, therefore, appears a good package to consider in the premium hatchback segment, backed by Hyundai's 5 years' Wonder Warranty offer.